Saint Joseph’s Church in
Ballybrown, and the work
of a Limerick-born architect 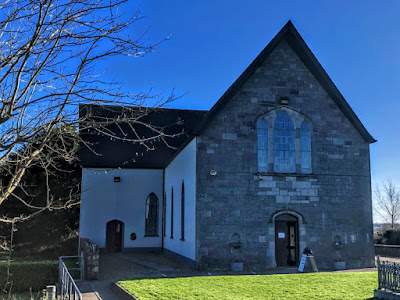 During a recent visit to the Kilkeedy and Tervoe area, north of Clarina and Mungret, I stopped to see Saint Joseph’s Church in Ballybrown, a large church built of hewn limestone in 1831.

Ballybrown is first named in mediaeval documents as Broneston in 1331, and it is referred to as Ballibrownie in the mid-17th century. 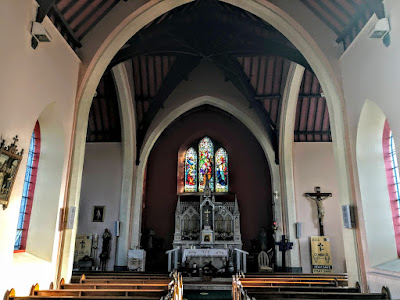 The first church here stood on the other side of the junction near the present-day church. The present Saint Joseph’s Church dates from 1831, and was originally a thatched building. It was not completed until the 1840s, and it was later altered in 1898 to designs by the Limerick architect William Edward Corbett.

The church is aligned on a south-north axis instead of the traditional east-west axis. The snecked limestone façade and carved limestone dressings are evidence of the skill of the 19th century stonemasons involved in building Saint Joseph’s.

The sculpted plinths of the internal pilasters and the decorative timber ceiling also show considerable care and attention to detail. The height, scale and detached form of this church make it an imposing feature in the area. 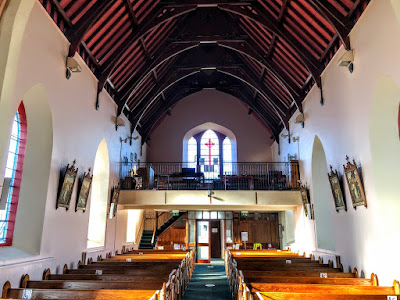 The church has a three-bay nave, chancel, single-storey sacristy and pitched slate roofs. The architectural details include a limestone eaves course, copings and cross finial, snecked limestone walls on the north and west sides, and rendered walls on the east and south sides.

The door at the north side (liturgical west) has a chamfered limestone surround, carved hood-moulding and a glazed overlight, with a double-leaf timber battened doors with flanking wall mounted carved limestone fonts. 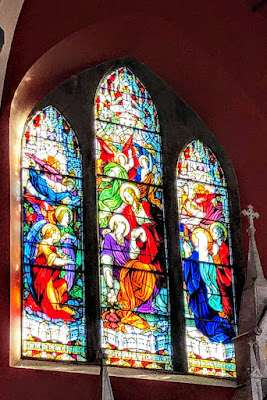 The three-light window above the altar depicts the death of Saint Joseph (Photograph: Patrick Comerford, 2021)

Inside the church, the chancel has a pointed arch and a marble altar and reredos, and the three-light window over the altar depicts the death of Saint Joseph.

The church has an ornate timber scissors truss ceiling with a quadripartite vault that has decorative timber ribs at the crossing. There is a timber gallery with metal railings at the entrance. The pilasters at the crossing having carved limestone plinths.

Father William Downes, the parish priest responsible for building the church, died in suspicious circumstances in 1840. He was a vigorous opponent of agrarian secret societies in the pre-Famine years. He was found lying on the road and unconscious and died soon after. Although his injuries were said to have been caused by a fall from his horse, there were persistent rumours that he had been murdered. 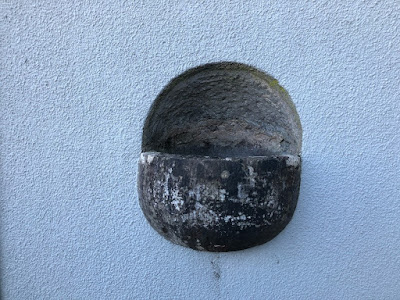 One of the pair of wall mounted carved limestone fonts flanking the main door of the church (Photograph: Patrick Comerford, 2021)

The alterations and additions in 1898 were designed by the Limerick architect and civil engineer William Edward Corbett (1824-1904). He was born in Limerick on 19 April 1824, the son of Patrick Corbett.

Corbett was the Limerick City architect and borough surveyor from 1854 to 1899, having succeeded by Joseph J Peacocke. He was a member of the Royal Institute of Architects of Ireland (MRIAI) from 1878. He lived at 39 Ennis Road, and later at Willmount, Lansdowne Road, Limerick, and worked from Patrick Street and Glentworth Street, Limerick.

Apart from Saint Joseph’s Church, Ballybrown, Corbett’s church works include Ballycorrick Church (1858), building Saint Alphonsus Redemptorist Church designed by PC Hardwick (1858-1862), superintending the building of the parish church in Castleconnell (1863), a marble altar for the church in Moneygay (1861), work on the Jesuit Church of the Sacred Heart on the Crescent, Limerick, the tower and sacristy for the church in Clonlara, Co Clare (1871), the Franciscan Church on Henry Street, Limerick (1876-1886), and the transept, tower and façade of Saint Joseph’s Church, O’Connell Street, Limerick (1900-1904).

However, Corbett’s best-known work is probably the Tait Memorial Clocktower in Baker Place, erected as a testimonial to the Mayor of Limerick, Alderman Peter Tait, in 1866.

Corbett died at 79 at Willmount on 1 February 1904 and was buried at Mount Saint Lawrence Cemetery. 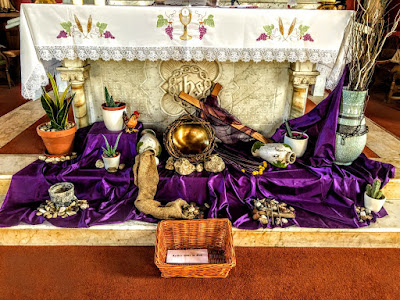 There are a number of church ruins near Ballybrown, including Saint Margaret’s in Newtown, near the banks of the Shannon, and a ruined church known as ‘Clouana Temple.’ Two former parish priests are buried at Clouana: Father Nicholas Brady, who was ordained in Limerick in 1765, died in 1795; Father Jeremiah Cronin was Parish Priest in 1807-1828, during difficult years marked by tithe wars and increasing sectarianism.

I noticed a shrine to Cardinal John Henry Newman in the south transept (geographical west) in Saint Joseph’s Church, during my visit last week. I thought this shrine was unusual, but later realised this may be explained by strong connections between this key figure in Oxford Movement and the Monsell family of Tervoe.

But more about that link in a posting on another day. 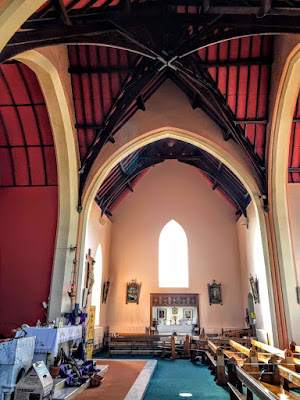