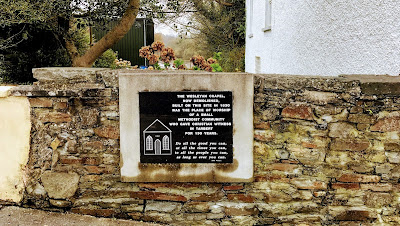 Books are always a welcome present, and sometimes they arrive in the post as unexpected and delightful surprises. During the weekend, Pádraig Ó Conchbhair, the Ballylongford historian sent me a copy of his book, A Remote Outpost: the story of the Methodist Society in Tarbert, County Kerry, published in 2005. The wall plaque refers to the fact that there was a Wesleyan Methodist chapel at this location in 1830.

Pádraig Ó Conchbhair has also written books on Robert Emmet and the 1798 Rising in Co Kerry. He points to the coincidence that ‘it was because of the Rebellion of 1798 that the Methodist Connexion began to use Irish speaking preachers, which in turn led to the establishment of the Tarbert Society, a community of Christian Witness in North Kerry for over 140 years.’

Although John Wesley often visited Rathkeale and Adare in Co Limerick, he never visited Tarbert, nor did he ever visit any other part of Co Kerry, making it the only country in Ireland that Wesley never visited.

Instead, ‘Methodism came to Kerry through the Rev Charles Graham (1750-1824), ‘The Apostle of Kerry,’ an Irish speaker who was born in Sligo. He was sent to Kerry in 1790 at John Wesley’s express wish, although there is no evidence that he ever preached in North Kerry.

A preaching house was built in Tralee in 1795, and the first point of contact for Methodists with Tarbert may have been the Revd Adam Averell’s visit on 9 June 1790.

One of the earliest Methodist preachers to minister in Tarbert was the Revd Gideon Ouseley, an Irish speaker from Dumore, Co Galway. He rowed across the Shannon from Kilrush, Co Clare, to Tarbert, one day in 1820, and as he came ashore on Tarbert Island he declared aloud: ‘I take Tarbert in the name of the Lord Jesus.’

The Revd William Foote held regular Methodist services in Tarbert from 1820, and his twin sons were baptised in Saint Brendan’s Church, Kilnaughtin (Tarbert) on 4 April 1821.

The Methodist Conference approved building a chapel in Tarbert in 1830, and a site on Church Street, east of the Rectory, was leased from John Leslie of Tarbert House. The new chapel and school opened for worship on 30 October 1830. It was a year after Catholic Emancipation and, by coincidence, this was the same year work began on building the first Roman Catholic church in Tarbert.

At the opening of the new Wesleyan chapel, the preachers included the Revd Elijah Hoole, a former missionary in India, and the Revd James Gillman, a Methodist minister in Limerick. The Clare Mission, based in Kilrush, once covered five counties – Clare, Galway, Tipperary, Limerick and Kerry – and ministers based in Kilrush regularly rowed eight miles across the Shannon Estuary to preach in the chapel in Tarbert, often exposing themselves to great danger.

The Methodist congregations in Kilrush and Ennis, Co Clare, were joined to the Limerick circuit based in Bedford Row, Limerick, in 1885. The Limerick Circuit was reorganised in 1903, and by 1908 Tarbert was transferred from the Clare Mission to the Rathkeale Circuit.

Pádraig Ó Conchbhair’s book also includes the stories of some unusual Methodist ministers. The Revd Michael Fitzelle Boveneizer of Rathgar, originally from Rathkeale, was an occasional preacher in Tarbert, and his name is included in list of lessees when the chapel in Tarbert was transferred from the Clare Mission to the Rathkeale Circuit in 1908. But he retired from the Methodist ministry at an early age, became a minister in the Congregationalist Church in England, and later developed an interest in spiritualism.

On one occasion, Boveneizer wrote to Ireland to find out the exact date of the death of the Revd P Donovan, saying he had been in touch with him at a séance the previous night. The reply came with glee the next day, saying Donovan was still alive and living in Dalkey, where he could be contacted directly without the necessity of a séance.

At the high point of Methodism in Ireland, there were three Methodist chapels in Co Kerry on the Tralee Circuit: Tralee, Ballymacelligot and Killorglin; and three on the Killarney Circuit: Killarney and Kenmare in Co Kerry and Allihies in Co Cork. The Tarbert ‘Mission Station,’ on the other hand, was linked with Kilrush Circuit, based in Co Clare.

The 1911 census shows eight Methodists living in Tarbert, including the six members of the Whitell family of the coastguard officer on Tarbert Island.

The Hill family of Church Street and later of Woodlands, had a large corn trade and were the principal Methodist family in Tarbert. They originally came from Mount Pleasant near Askeaton, Co Limerick. The story is told of a Miss Hill of Woodlands, who played the harmonium in Tarbert Chapel. She was walking through Tarbert one day and found a halfpenny lying on the ground. She picked it up, but her piety prohibited her from spending it on herself as she had neither earned it nor been given it as a gift … and so she chose to use it for the work of the Lord.

She bought a halfpenny spool of sewing cotton and used this to crochet a piece of lace which she then sold for 2/6 – sixty times the cost of the cotton. With the proceeds, she bought wool and knitted stockings. The money she received for them was enough to buy a new-born calf which she put out to graze for a year in the field behind the house. By that time the calf had grown into a heifer and was sold.

Miss Hill then had enough money to buy a small harmonium which she gave to the Methodist Church in Tarbert where it accompanied the worship for many years. She died in 1946, and was buried near Pallaskenry.

Finally, the Methodist chapel in Tarbert closed in 1962, was sold to the Downey family and was demolished, and some of the memorial plaques were moved to Saint Brendan’s Church, the nearby Church of Ireland parish church in Tarbert.

The Wesleyan Methodist Community in Tarbert had given witness for almost a century and a half. A plaque in Church Street on the site where the Methodist Chapel once stood was unveiled in 2010 at an event organised by the Tarbert Historical and Heritage Society. The speakers included Patrick Lynch and Pádraig Ó Conchúir. 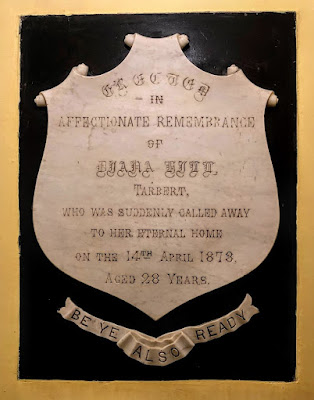