Praying in Advent 2021:
8, Clement of Alexandria 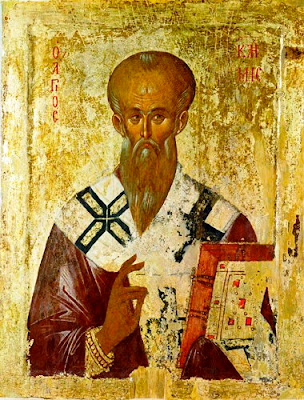 Clement of Alexandria … a saint for Advent or a theologian on the margins of heresy?

Before a busy day begins, I am taking some time early this morning (5 December 2021) for prayer, reflection and reading. 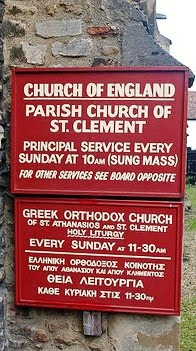 Clement of Alexandria is commemorated on 5 December in the Calendar of the Episcopal Church and on 4 December in many other Anglican churches.

The Coptic Orthodox Church in Egypt also venerates him as a saint, and he is usually regarded as a Church Father.

But Clement does not appear in the calendars of Greek, Slavonic or western Orthodox churches, and he was removed from the Roman Martyrology by Pope Clement VIII.

Saint Clement’s Church, on the corner of Bridge Street and Portugal Place, Cambridge, is shared by the Church of England with the Greek Orthodox Parish of Saint Athanasios and Saint Clement in Cambridge.

Saint Clement’s Church, Cambridge, and Saint Clement Danes on the Strand in London are examples of the popularity of dedicating churches to Saint Clement in Danish settlements in England. But the saint who gives his name to these churches is Saint Clement of Rome, the first Apostolic Father of the Church.

So, is Clement of Alexandria a saint?

And, is he worth considering as an example in Advent as we prepare for the coming of Christ?

Clement of Alexandria, who was born Titus Flavius Clemens, probably in Athens into a Greek family, lived from ca 150 to ca 215. He was a convert to Christianity, and is remembered as a leading teacher in the Catechetical School of Alexandria, where his pupils included Origen and Alexander of Jerusalem.

Clement’s writings show how familiar he is with classical Greek philosophy, literature, mythology and mystery religions. He was influenced by Hellenistic philosophy, especially Plato and the Stoics, to a greater extent than any other Christian thinker of his time.

As a young man, he rejected his family’s religious practices, and in a religious quest travelled through Greece, Asia Minor, Palestine and Egypt. During his wanderings, his teachers included Athenagoras of Athens, Tatian, and Theophilus of Caesarea.

In the year 180, Clement arrived in Alexandria, and he was ordained priest within ten years. He left Alexandria during persecutions at the beginning of the third century, and may have lived in Antioch or Cappadocia from 202. The date of his death is unknown, although he probably died ca 215.

Clement’s three principal theological works are: the Protrepticus or Exhortation (ca 195); the Paedagogus or Tutor (ca 198); and the Stromata or Miscellanies (ca 198-203).

Eusebius in his Church History is the first writer to provide an account of Clement’s life and works. He also provides a list of Clement’s works, biographical information, and an extended quotation from the Stromata.

Clement is also important because he shows how faith is related to knowledge and he emphasises the superiority of revelation over philosophy. But Clement had no notable influence on the course of theology beyond his influence on the young Origen, who succeeded him at the school in Alexandria.

His writings were copied by Hippolytus and Theoderet of Cyprus, and were admired by Saint Jerome.

Clement has grown in favour for his charming literary temper, his attractive candour, his brave spirit that makes him a pioneer in theology, and his leaning to the claims of philosophy. To readers today, he is modern in spirit.

He was exceptionally well-read, with a thorough knowledge of Biblical and Christian literature and of Greek poets and philosophers, of orthodox and heretical writings, and he has preserved the fragments of many lost works.

But, in his teaching, Clement lacks technical precision and makes no pretence to orderly exposition. He uses philosophy as an instrument to transform faith into science and revelation into theology. Clement refuses to have anything but faith for the basis of his speculations. He had read all the Books of the New Testament, except II Peter and III John. Yet he often fails in his endeavours and misuses texts in his faulty exegesis, interpreting the Scripture after the manner of Philo and finding allegories everywhere, so that Biblical facts become mere symbols to him.

Clement argues for the difference between the faith of the ordinary Christians, who are without insight, and the science of the perfect Christians who have insights into ‘the great mysteries’ of humanity, of nature, and of virtue, and live lives of unalterable calm, in closest union with God through prayer.

Clement’s writings come before the days of the great Trinitarian controversies. Some critics doubt whether he distinguishes the Father, Son and Holy Spirit as Persons, but a careful reading of him proves that he did. While Photius believed Clement taught a plurality of Words, in reality Clement drew a distinction between the Father’s Divine immanent attribute of intelligence and the Personal Word who is the eternally-begotten Son.

He acknowledges two natures in Christ; Christ is the Man-God, who profits us both as God and as man. He regards Christ as one Person – the Word. There are frequent instances in his writings of the interchange of idioms, so that Patriarch Photios of Constantinople later s accuses him of Docetism. However, Clement clearly admits in Christ a real body, although he thought this body exempt from the common needs of life, such as eating and drinking, and that the soul of Christ is exempt from the movement of the passions, including joy and sorrow.

In places, Clement appears to be close to Modalism, in other places close to Subordinationism. He says little of the Holy Spirit, but when he refers to the Third Person of the Trinity he adheres closely to the language of Scripture.

In the ninth century, Patriarch Photios wrote an extensive critique of Clement’s theology, in which he is appreciative of Clement’s learning and literary merits of his work, but he condemns many of his ideas as heretical.

Until the 17th century, Clement was venerated as a saint and martyr in the Roman Catholic tradition, and his feast fell on 4 December.

So, can we consider Clement of Alexandria a saint worth pondering as we begin the second week of Advent?

Certainly, as an experimental and pioneering theologian who raises important questions about the incarnation and personhood of Christ in the decades immediately before the great Christological and Trinitarian debates, he is worth re-reading in these weeks before Christmas. 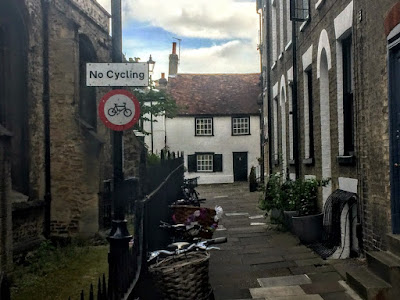 Bicycles chained to the railings at the side of Saint Clement’s Church on Portugal Place, Cambridge (Photograph: Patrick Comerford)

1 In the fifteenth year of the reign of Emperor Tiberius, when Pontius Pilate was governor of Judea, and Herod was ruler of Galilee, and his brother Philip ruler of the region of Ituraea and Trachonitis, and Lysanias ruler of Abilene, 2 during the high priesthood of Annas and Caiaphas, the word of God came to John son of Zechariah in the wilderness. 3 He went into all the region around the Jordan, proclaiming a baptism of repentance for the forgiveness of sins, 4 as it is written in the book of the words of the prophet Isaiah,

‘The voice of one crying out in the wilderness:
“Prepare the way of the Lord,
make his paths straight.
5 Every valley shall be filled,
and every mountain and hill shall be made low,
and the crooked shall be made straight,
and the rough ways made smooth;
6 and all flesh shall see the salvation of God”.’

The Prayer in the USPG Prayer Diary today (5 December 2021) invites us to pray:

Righteous God,
may we overflow with love,
and know what is good.
Lead us down the straight path,
that we may find salvation. 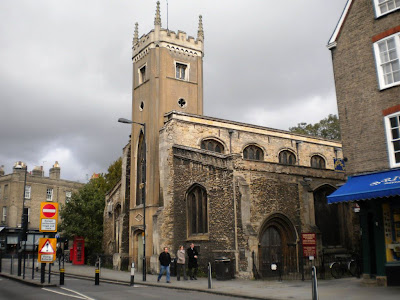 Saint Clement’s Church, Cambridge … named after which Clement among the Early Fathers?