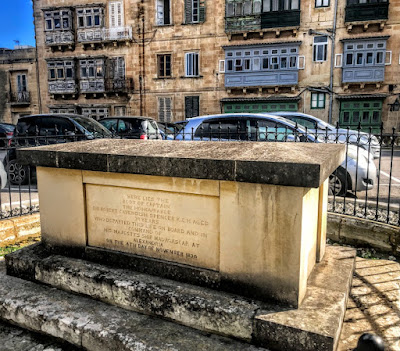 The grave of Sir Robert Cavendish Spencer on the walls of Valletta (Photograph: Patrick Comerford, 2022)

I was writing yesterday (24 January 2022) about the Hastings Gardens in Valletta and the tomb of the Irish politician and former Governor of Malta, Lord Hastings from Moira, Co Down.

But close to the Hastings Gardens last week I also came across the unusual grave of Sir Robert Cavendish Spencer (1791-1830), a naval officer with many Irish family links, and I learned too about another Irish politician and diplomat in Malta, the 3rd Earl of Bessborough.

Spencer’s aunt, Lady Georgiana Spencer (1757-1806), married William Cavendish, 5th Duke of Devonshire, who lived at Lismore Castle, Co Waterford. This explains Spencer’s middle name, and made him a distant kinsman of Lord Frederick Cavendish (1836-1882), the Chief Secretary of Ireland, who was murdered in the Phoenix Park, Dublin, in 1882.

Robert Cavendish Spencer joined the Royal Navy in 1804 and went to command HMS Pelorus, HMS Kite, HMS Espoir, HMS Carron, HMS Cydnus and HMS Ganymede in the Mediterranean, where he negotiated with the Bey of Tunis.

Later, Spencer commanded HMS Owen Glendower, and HMS Naiad in the Mediterranean, where he took part in the operations against Algiers in 1824. He was then employed on the coast of Greece, during the Greek War of Independence.

He was the private secretary to King William IV, when the future king was the Duke of Clarence, in 1827-1828. He was knighted in 1828 after he was appointed to command HMS Madagascar, again serving in the Mediterranean.

However, Spencer died off Alexandria on 4 November 1830. He had just been called back to London as surveyor-general of the ordnance. Spencer was a cousin of Sir Frederick Cavendish Ponsonby (1783-1837), the Governor of Malta (1826-1836), which may explain why he was buried in Valletta and why the Spencer Monument in the shape of an obelisk was erected to his memory in Blata l-Bajda, near Valletta.

The Madagascar had just returned from Alexandria when Spencer died on board his ship while in quarantine in Malta on 4 November 1830. He was aged 39. His body was kept in quarantine at the Lazaretto on Manoel Island in Marsamxett Harbour at Valletta for the full 40 days required. His body was then taken to Valletta and he was buried at Saint Michael’s Bastion on 12 December 1830. The burial service was conducted by the Madagascar’s chaplain, the Revd David Morton.

The part of the bastion where he was later renamed Spencer’s Bastion. The inscription on Spencer’s reads: ‘Here lies the body of Captain the Honourable Sir Robert Cavendish Spencer KCH, aged 39 years, who departed this life on board and In command of His Majesty’s Ship Madagascar at Alexandria on the 4th Day Of November 1830.’

The Spencer Monument was designed by the Maltese architect Giorgio Pullicino in 1831 and was originally located at Corradino Hill. It was moved to its present position in 1893. It was struck by lightning in 1975 and suffered considerable damage, however it was later restored.

Spencer’s Irish cousin, the Governor of Malta at the time, Sir Frederick Ponsonby, was the second of three sons of Frederick Ponsonby, Viscount Duncannon, later 3rd Earl of Bessborough. His sister was the ‘notorious’ Lady Caroline Lamb, who married the Prime Minister Viscount Melbourne.

Ponsonby, who fought at the Battle of Waterloo, became inspecting field officer in the Ionian Islands on 20 January 1824, and on 27 May 1825 he was promoted major-general, commanding British troops in the Ionian Islands. The next year, he was appointed Governor of Malta on 22 December 1826 and he remained in Malta for 8½ years.

Ponsonby remained in Malta for 8½ years. He left the governorship in May 1835, but remained the de jure Governor until 30 September 1836. He died suddenly on 11 January 1837. Ponsonby’s Column was erected in his honour in Valletta in 1838, but was destroyed by lightning in 1864.

Sir Robert Spencer’s body was kept in quarantine at the Lazaretto on Manoel Island before he was buried at Saint Michael’s Bastion (Photograph: Patrick Comerford, 2022; click on image for full-screen view)