With the Saints through Christmas (9):
3 January 2022, Saint Fintan of Doone 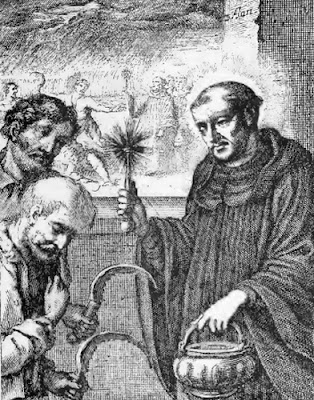 This morning, I am reflecting on the life of Saint Fintan of Doone. Although he is a much-forgotten saint, he is, nevertheless, a saint of the Diocese of Limerick.

There are many Irish saints with the name Fintan, including Fintan of Clonenagh (17 February), Saint Fintan, surnamed Munna (21 October), Saint Fintan, Prince of Leinster (15 November) and other Fintans remembered on 1 and 7 January, 21 February, 27 March, 11 May, 9 October, and 14 December.

Saint Fintan of Doone, Co Limerick, however, is clearly identified as the brother of Saint Finlugh and the son of and son to Pipan, son of Tule, who lived at Cliach, according to the life of this saint. Other sources say his father was Diman, a descendant of Mured Manderig, King of Ulster. His mother Alinna was of noble birth, belonging to a family who lived in present-day Co Limerick.

Saint Fintan was a student in Saint Comgall’s school in Bangor, perhaps ca AD 550. His future mission and miracles, for the most part, seem to have been confined to the southern parts of Ireland.

A legend recalls a man suffering with leprosy approaching Saint Comgall and asking for bread made from corn lately ripened. The bread was found miraculously, made from grain that had been produced prematurely.

It is said that Calathmagh, an irreligious king in a district then known as Calathmagh, refused to meet Saint Fintan when he was on a mission, and tried to way as he travelled. But when the king’s agents were blinded, Saint Fintan restored their sight.

Saint Fintan went to a live in a place named Tulach Bennain, but was expelled, only to return later by invitation. Stories are also told of him exorcising demons, and he is celebrated for his generous hospitality.

Saint Fintain later settled in a place named Dunbleisque, later known as Doone in Co Limerick. He is said to have lived to the incredible age of 260, and to have been quite decrepit at the time of his death on 3 January.

The parish of Doone is in the Diocese of Emly. Although the site of his old monastery is no longer known in local or popular tradition, he is associated with a holy well in the area.

The prayer in the prayer diary of the Anglican mission agency USPG (United Society Partners in the Gospel) invites us to pray this morning (3 January 2022):

Let us pray for the Church of South India, a thriving example of a united and uniting Church.