This is an interfaith venture, organised by Andrew Jacobs, a Lichfield-based teacher, and supported by members of the Christian, Jewish, Muslim, Sikh and Buddhist communities in the Lichfield area.

A group of 13 monks and nuns from the Wat Mahathat Thai Buddhist Temple in King’s Bromley, led by Abbot Ajahn, Thailand’s most senior monk in Britain, were prominent participants on the walk as we walked through Lichfield and then began our way along the pilgrim way from Lichfield to Stafford.

The Lichfield Peace Walk began at Saint Chad’s Church, Lichfield, at 8 am on Monday morning.

The Rector of Saint Chad’s, the Revd Rod Clark, and a number of parishioners were at Saint Chad’s to meet the walkers. He spoke of Saint Chad’s early presence at this site seventh century, and the links between Lichfield and the early church in Lindisfarne trough Saint Chad, Saint Aidan and Saint Oswald.

After prayers and reflections in Saint Chad’s Church, the monks and nuns gathered around Saint Chad’s Well in the churchyard to pray and chant.

From Saint Chad’s Church, the walkers made our way along the rim of Stowe Pool, with the spires of Saint Michael’s Church, Greenhill, and Saint Mary’s Church towering above us in the background.

On our arrival in the Cathedral Close, Rod spoke of the significance of Peter Walker’s new statue of Saint Chad at Lichfield Cathedral.

We arrived at Lichfield Cathedral after Morning Prayer and were greeted at the west front of the cathedral by the Precentor of Lichfield, Canon Andrew Stead.

This year marks the 1350th anniversary of the death of Saint Chad in the year 672. He spoke in the Lady Chapel of how the area is being prepared for a new shrine of Saint Chad, and how part of his relics are due to arrive in Lichfield Cathedral from Birmingham Cathedral in November.

After prayers and after the monks chanted, we made our way from the Cathedral Close to the Garden of Remembrance on Beacon Street, below the cathedral spires and by Minster Pool. It was appropriate on this Peace Walk to remember all who had died in war.

We then visited the site of the former Franciscan Friary, and returned through Beacon Park and by the statue of Edward Smith, the captain of the Titanic, to the Beacon Park Peace Garden.

We left Beacon Park at Abnall’s Lane, and made our way along the Western Bypass, to the beginning of Cross in Hand Lane, just beside the Hedgehog Vintage Inn, on the corner of Stafford Road and the beginning of the ‘Two Saints’ Way.’

Many of the walkers – appropriately – held small wooden crosses as we walked along Cross in Hand Lane, England’s own version of the Camino. We varied in numbers as the walk continued along the ‘Two Saints Way’, from two to three dozen at any one time.

Little has changed in the landscape along Cross in Hand Lane since mediaeval times. The road twists and turns, rises and falls, with countryside that has changed little over the centuries.

The fields along Cross in Hand Lane are green and golden under the blue skies of summer (Photograph: Patrick Comerford, 2022)

The fields along Cross in Hand Lane are green and golden under the blue skies of summer. The fields in this part of rural Staffordsire are busy with farm work, the barns are being filled, there are horses in paddocks, there are some cows too, and sun was shining all along our way. Little has changed since I got to know this landscape snce I first got to know it over half a century ago, apart from the loss of the view of the stacks of the cooling towers at Rugeley Power Station last year (6 June 2021).

Along the way, Abbot Ajahn spoke of his PhD work in Birmingham, and we shared our understandings of mission, interfaith dialogue, presence and engagement, hospitality, diversity and pluralism, war and peace.

As we reached Farewell, we followed the pilgrim route signs along public footpaths and across the fields, and sat beneath the trees in a large field for a picnic lunch before being welcomed to Saint Bartholomew’s Church. Tomorrow is the Feast of Saint Bartholomew (24 August).

The monks on Lichfield Peace Walk wend their way along Cross in Hand Lane from Lichfield to Farewell (Photograph: Patrick Comerford)

Before leaving the pilgrims at Farewell, Abbot Ajahn exchanged and shared blessings. As I returned to Lichfield, the peace walk continued on to Castle Ring, where Monday’s stage of the walk ended.

Today, on Day 2 (Tuesday 23 August), the Lichfield Peace Walk continued across Cannock Chase. Beginning at Castle Ring at 8 am, the walkers continued along the Heart of England Way, visiting the Commonwealth, German and Polish war memorials, and continuing along Sherbrook Valley to Milford.

Tomorrow, on Day 3 (Wednesday 24 August), the Lichfield Peace Walk sets off for Stafford. The walk begins at Milford Common at 8 am, and continues through golden fields, green forest and along a beautiful river-side walk, before arriving at the final stage of the walk at Saint Chad’s Church, Stafford.

Andrew Jacobs says Lichfield Peace Walk has two main goals. He believes peace on earth cannot be achieved until people of different faith backgrounds talk to each other, and especially visit each other’s places of worship.

He also believes that when Lichfield venerates Saint Chad, the city prospers. ‘When his shrine was destroyed pilgrims stopped coming, and eventually violence erupted in the Cathedral.’ 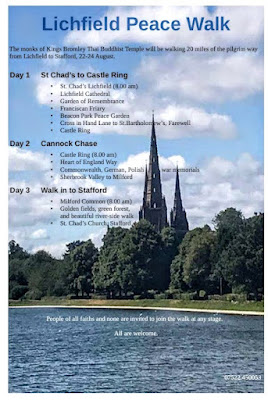