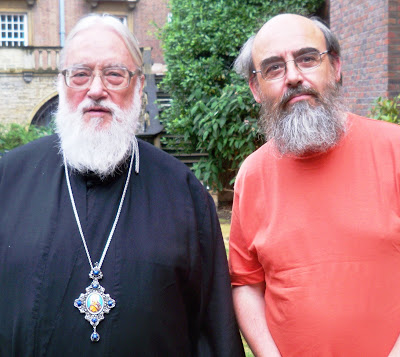 Patrick Comerford and Metropolitan Kallistos Ware at the IOCS summer school in Sidney Sussex College, Cambridge, a few years ago

I am saddened to hear the news that Metropolitan Kallistos Ware died earlier today (24 August 2022), a few weeks before his 88th birthday.

Metropolitan Kallistos of Diokleia was a pre-eminent Orthodox theologian in Britain, an academic, lecturer and author and a faithful priest and bishop.

For many years, Metropolitan Kallistos (1934-2022) was President of the IOCS in Cambridge and chaired the board. For many people in the English-speaking world, his books and lectures were their first introduction to the world of Orthodoxy.

He was deeply committed to international dialogue between the Orthodox and Anglican Churches, and as awarded the Lambeth Cross for Ecumenism by the Archbishop of Canterbury in 2017 ‘for his outstanding contribution to Anglican-Orthodox theological dialogue.’

Metropolitan Kallistos was born Timothy Ware in Bath on 11 September 1934, and was raised in an Anglican family. Having won a King’s Scholarship, he went to Westminster School. From there he went to Magdalen College, Oxford, where he took a double first in classics as well as reading theology.

He was ordained priest within the Ecumenical Patriarchate in 1966 and was tonsured as a monk, receiving the name Kállistos. That same year, he was appointed the Spalding Lecturer in Eastern Orthodox studies at the University of Oxford.

In 2007, the Holy Synod of the Ecumenical Patriarchate elevated the Diocese of Diokleia to the status of a metropolitan diocese. He became a titular metropolitan although he never had pastoral care of a diocese and was nominally an assistant bishop in the Archdiocese of Thyateira and Great Britain.

It was a privilege some years ago to join his 80th birthday celebrations at an IOCS conference in Cambridge. The conferences and programmes organised by the IOCS are not going to be the same without his humorous and gently-delivered yet scholarly and authoritative papers.

May his memory be eternal.


Posted by Patrick Comerford at 12:00