‘Forgot the cry of gulls, and the deep sea swell’ (TS Eliot, ‘The Waste Land’) … a gull by the sea in Crete (Photograph: Patrick Comerford)

Today, the Calendar of the Church of England in Common Worship remembers Leo the Great, Bishop of Rome, Teacher of the Faith, 461 (10 November 2022).

Leo the Great became pope in the year 440 and twice proved his bravery in saving the citizens of Rome from the invading barbarians. He was an eloquent and wise preacher, using simple gospel texts to proclaim the Christian faith. His administrative skills were unrivalled and he used the resources of the Church for the good of the people. Rather than further confuse Christians by entering into the controversy over the person of Christ, Leo spoke simply of the humility of Christ who was divine and human in his compassion, uniting biblical images in prayer rather than dividing in debate. Leo died on this day in the year 461.

Later this morning, I have a medical appointment and tests for my B12 deficiency. But, before this day gets busy, I am taking some time this morning for reading, prayer and reflection.

‘Forgot … the profit and loss’ (TS Eliot, ‘The Waste Land’) … the Bank of England and the Royal Exchange in the City of London (Photograph: Patrick Comerford)

22 Then he said to the disciples, ‘The days are coming when you will long to see one of the days of the Son of Man, and you will not see it. 23 They will say to you, “Look there!” or “Look here!” Do not go, do not set off in pursuit. 24 For as the lightning flashes and lights up the sky from one side to the other, so will the Son of Man be in his day. 25 But first he must endure much suffering and be rejected by this generation.’

‘He passed the stages of his age and youth / Entering the whirlpool’ (TS Eliot, ‘The Waste Land’) … Byron’s Pool by the River Cam in Grantchester, near Cambridge (Photograph: Patrick Comerford)

The Waste Land 4: ‘Death by Water’

TS Eliot published ‘The Waste Land’ in 1922, the same year as James Joyce published Ulysses. The poem includes well-known phrases such as ‘April is the cruellest month,’ and ‘I will show you fear in a handful of dust.’ Recent studies see in ‘The Waste Land’ a description of Eliot’s pilgrimage from the Unitarianism of his childhood to his life-lasting Anglo-Catholicism.

‘The Waste Land’, which I am reflecting on throughout this week, was first published 100 years ago at the end in 1922. It is a masterpiece of modern literature and one of the greatest poems in the English language. Its opening lines are often quoted, even by people who have never read all five sections and 434 lines of the poem.

1, ‘The Burial of the Dead’, introduces the diverse themes of disillusionment and despair.

2, ‘A Game of Chess’, employs alternating narrations, in which vignettes of several characters address those themes experientially.

3, ‘The Fire Sermon’, offers a philosophical meditation in relation to the imagery of death and views of self-denial in juxtaposition, influenced by Augustine of Hippo and Eastern religions.

5, ‘What the Thunder Said’, the culminating fifth section, concludes with an image of judgment.

At a mere ten lines, ‘Death by Water’ is the fourth and shortest of the five sections of ‘The Waste Land.’ Compare this with the section before it, ‘The Fire Sermon’, which is 234 lines and accounts for more than half the entire poem.

But ‘Death by Water’ is also the most organised and structured of the five sections of ‘The Waste Land.’ The alliteration and the deliberately archaic language also contribute to the serious, didactic feel of this section.

‘Death by Water’ describes Phlebas the Phoenician who has died, apparently by drowning. In death he has forgotten his worldly cares as the creatures of the sea have picked his body apart. The narrator asks his reader to consider Phlebas and recall his or her own mortality.

The original draft of ‘Death by Water’ was much longer, with Eliot’s draft involving a crew of men at sea and the ensuing shipwreck. It culminates in the description of the dead Phoenician sailor, Phlebas, which is the only surviving part of the original draft.

Trade and finance are part and parcel of ‘The Waste Land,’ with numerous financially significant allusions. When he was writing ‘The Waste Land’, Eliot was a clerk in Lloyd’s Bank in the City of London. Perhaps Phlebas the Phoenician is a trader too: in death, he forgets ‘profit and loss’.

Profit and loss; life and death. ‘Death by Water’ turns on pairings that are joined by ‘and’ or ‘or’, as if to suggest the bobbing of the waves … ‘gulls and sea’ … ‘profit and loss’ … ‘rose and fell’ … ‘age and youth’ … ‘Gentile or Jew’ … ‘handsome and tall’ … death renders immaterial all pairs of opposites or differences.

Perhaps too in this passage Eliot is also contemplating his future conversion, when he turns from the Unitarianism of his childhood to Anglo-Catholicism, and his future Baptism, for Saint Paul describes the waters of Baptism and as death and rising to new life in Christ: ‘Therefore we were buried with him by baptism into death, so that, just as Christ was raised from the dead by the glory of the Father, so we also might walk in newness of life’ (Romans 6: 4).

Phlebas the Phoenician, a fortnight dead,
Forgot the cry of gulls, and the deep sea swell
And the profit and loss.
A current under sea
Picked his bones in whispers. As he rose and fell
He passed the stages of his age and youth
Entering the whirlpool.
Gentile or Jew
O you who turn the wheel and look to windward,
Consider Phlebas, who was once handsome and tall as you.

God our Father,
who made your servant Leo strong in the defence of the faith:
fill your Church with the spirit of truth
that, guided by humility and governed by love,
she may prevail against the powers of evil;
through Jesus Christ your Son our Lord,
who is alive and reigns with you,
in the unity of the Holy Spirit,
one God, now and for ever.

God of truth,
whose Wisdom set her table
and invited us to eat the bread and drink the wine
of the kingdom:
help us to lay aside all foolishness
and to live and walk in the way of insight,
that we may come with Leo to the eternal feast of heaven;
through Jesus Christ our Lord.

The theme in the USPG Prayer Diary this week is ‘A New Commandment.’ This theme was introduced on Sunday by Sue Claydon, chair of the Anglican Pacifist Fellowship.

Strengthen us to stand for all that is just and true and right. We pray for the Anglican Peace and Justice Network. 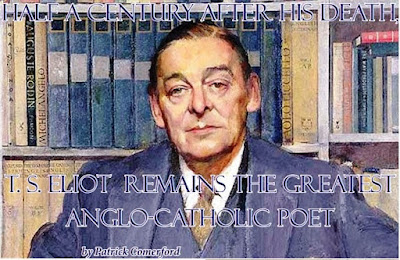 A feature on TS Eliot in ‘Koinonia’ magazine