Dungarvan in the Rain ... looking back on Dungarvan Bay. But who wants to buy the ‘Barony of Dugarvan’ for £20,000? (Photograph: Patrick Comerford)

Have you bought all your Christmas presents? Are they wrapped up and under the Christmas tree?

Over the years, I have sent some silly presents, just for the fun of it. Silly but fun presents include having a star named after someone, and buying a square foot of land in the Scottish Highlands that supposedly allows someone to be called ‘Laird, Lord or Lady of Glencoe.’

The Scottish title is really only a novelty gift package, and comes complete with instructions about how to change your name by deed poll so you can use the novelty title. It is all harmless, good fun, and probably helps to conserve a large forest and tract of Highland in Scotland.

On the other hand, it is amazing how many people fall for the sale of bogus and questionable feudal titles in both England and Ireland.

While the remnants of feudal tenure were abolished by statute in the Republic of Ireland in 2009, the sale of feudal titles relating to places in Ireland seems to continue.

Some years ago, Manorial Auctioneers were offering the title of the ‘Barony of Dungarvan,’ Co Waterford. Now this supposed feudal barony is back on the market again with an online business known as nobility.co.uk.

They would snigger up their sleeves at me in Cappoquin if I returned as the ‘Baron of Dungarvan’ (Photograph: Patrick Comerford)

I took a fancy to that one when I saw it. I had spent many cherished parts of my childhood on my grandmother’s farm near Cappoquin, Co Waterford. We were almost close enough to be neighbours of Lismore Castle, and the nearest largest town is Dungarvan, which was an exciting place for a pre-teens child to be brought shopping in the days before Christmas in the 1950s and early 1960s, even if the poet John Betjeman could be disparaging about ‘Dungarvan in the Rain.’

I could easily imagine the smug pleasures of being Baron of Dungarvan at Christmas time. But then I quickly realised anyone back in Cappoquin and Lismore would snigger up their sleeves at such a pretension. 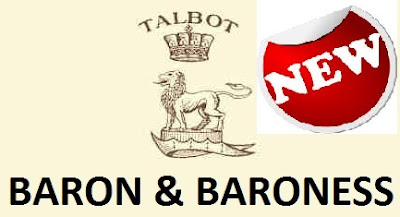 Who owns and who is entitled to claim the ‘Barony of Dungarvan’?

Although the Barony of Dungarvan was granted to the Earl of Shrewsbury in 1446, it is doubtful that the title still survives as any kind of legal entity. Nor is there any Barony of Dungarvan in Co Waterford. In all, there are eight baronies in Co Waterford: Coshmore and Coshbride; Decies within Drum; Decies without Drum; Gaultiere; Glenahiry; Middlethird; Upperthird; and Waterford City.

The parish of Dungarvan is bounded on the west by the parish of Aglish, on the south by the parishes of Ring and Ardmore, and on the east and north-east by Dungarvan Bay and part of the parish of Kilgobinet. In 1204, the Cantred of Dungarvan, one of three held by Donal O Faolain of the Decies, was escheated and the Justiciary was commanded to take it into the King’s hands. But Dungarvan was never a separate barony for administrative purposes in Co Waterford, and is a parish within the Barony of Decies Without Drum.

Despite the fact that there is no territorial Barony of Dungarvan in Co Waterford, the site is offering the ‘Barony of Dungarvan, Ireland,’ along with the titles of ‘Baron and Baroness,’ and says it was ‘once held by Earl of Shrewsbury, Premier Earl of England and High Steward of Ireland.’

Any potential buyers are told that the package includes a ‘Copy of Authentic Copyhold document with wax seals in Leather bound folder,’ as well as a ‘Legal Transfer Deed in compliance with Manorial / Feudal Law and the Law of Property Act 1925,’ along with an ‘Official Letter for applying Title to Passport, Driving Licence, Cheque Book and Credit/Debit cards,’ as well as a ‘Baron & Baroness Certificate,’ ‘Insurance / Guarantee’ (although they do not say what is insured or what is guaranteed), ‘Legal Right of Usage of the Titles Baron & Baroness,’ and ‘Lordship History (where available) and List of known previous owners.’

So, who owns this ‘Barony of Dungarvan,’ or the manorial rights in Dungarvan, if either ever existed?

In 1444, James FitzGerald, Earl of Desmond, obtained a patent for the government of Co Waterford and other counties of Munster.

However, two years later, on 17 July 1446, John Talbot, 1st Earl of Shrewsbury and then Lord Lieutenant of Ireland, obtained a grant from the king of the city and county of Waterford, and the dignity and title of Earl of Waterford, ‘together with the castles, honour, lands, and barony of Dungarvan, with jura regalia, wreck, &c. from Youghal to Waterford, because the country was waste, in so far as, in lieu of producing any profit to the crown, it was a cause of great loss.’

This patent was made by virtue of a privy seal, and by authority of Parliament. But by an act passed in the 28th year of the reign of Henry VIII, which vesting in the crown the possessions of all absentees from Ireland, all of these lands, rights, and titles were resumed by the crown. The only portion restored to the Talbot family was the title of Earl of Waterford, which was re-granted by King Charles II in 1661.

The title of Baron of Dungarvan was never used by the Talbot family, nor is it referred to in the standard peerage reference books, such as Debrett’s and Burke’s. 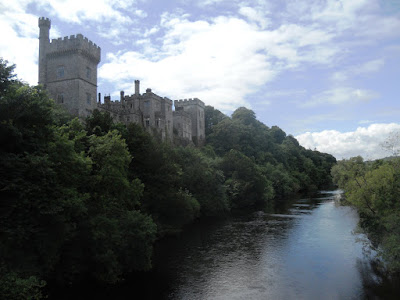 Lismore Castle ... at the centre of large estate that once included the Manor of Dungarvan (Photograph: Patrick Comerford)

On the other hand, the title of Lord Dungarvan has been used for four centuries as a courtesy title by the heirs to Earls of Cork.

Richard Boyle was already 1st Baron Boyle in the Irish peerage since 1616, when he was given the additional titles of Earl of Cork and Viscount of Dungarvan in 1620. Known as the ‘Great Earl,’ he was born in Canterbury, but he settled in Ireland in 1588, married Joan Apsley from Limerick, an Irish heiress, and he acquired large estates in Co Cork and Co Waterford, including Lismore Castle.

The Boyle and Cavendish Irish estate papers, which were deposited recently in the National Library of Ireland, include copies of the letter patent to Richard Boyle, 1st Earl of Cork, for the Manor of Dungarvan, and all other lands and premises granted to him in Ireland on 8 June 1625. A second grant of the Manor of Dungarvan is dated 8 June 1629.

The Boyle and the Cavendish estates included Lismore, Dungarvan, Cappoquin, Tallow, Youghal, Bandon, and other places in Co Cork, Co Waterford, Co Tipperary and in Dublin.

The 1st Earl’s sons included Robert Boyle, who was born in Lismore Castle and who is the physicist who gives his name to Boyle’s Law.

Richard Boyle (1612-1698), 2nd Earl of Cork and Viscount Dungarvan, also became Earl of Burlington in the Peerage of England, and his only son and heir, Charles Boyle, was summoned to the Irish House of Lords in his father’s junior title of Viscount Dungarvan in 1663. As Lord Dungarvan, he also sat in the English House of Commons as an MP for Tamworth (1670-1679) and then for Yorkshire (1679-1685).

But the Boyle family’s vast estates in Co Cork, including Lismore Castle, were inherited eventually by Lady Charlotte Elizabeth Boyle, who married William Cavendish, 4th Duke of Devonshire, in 1748. It was regarded as the outstanding dynastic alliance of the time.

The Dukes of Devonshire are descended from Sir Thomas Cavendish, Lord Chancellor of England, who died in 1557. In 1547, he married Elizabeth Barlow (1527-1608), ‘Bess of Hardwick’ and later Countess of Shrewsbury, and they founded a dynasty whose members are among the largest landowners in England.

On his succession in 1858, the 7th Duke of Devonshire found the family estates in a condition of ‘unexampled splendour and severe indebtedness.’ He decided that the Lismore estate, which had remained intact since coming into the hands of the Cavendish family, could no longer be maintained in the same way, and between 1859 and 1862 he sold the urban holdings at Dungarvan and Youghal, the two most expensive and contentious parts of the estate to manage.

His sale of Dungarvan and Youghal ushered in a new management strategy in which ever more stringent control was placed on estate spending.

Nobility.co.uk is clear in pointing out that they do not sell peerages, so what is up for sale?

The Irish peerage title of Baron of Dungarvan has not been a title of the Earls of Shrewsbury since the reign of Henry VIII, the title of Lord Dungarvan is currently being used by the heir to the Earl of Cork, and the Manor of Dungarvan was sold off when the properties in the manor were sold to the tenants by the Dukes of Devonshire and the Lismore Castle Estate over 150 years ago.

So, who is entitled to sell off the title of ‘Baron of Dungarvan’? And what would I get for my £20,000? Not much more than a leather-bound folder and a photocopy of a photocopy, I suspect.

I would be better off buying a few bottles of craft beer from Dungarvan. At least the Dungarvan Beerage is more authentic than the Dungarvan peerage, better value for money, and likely to give me more pleasure. 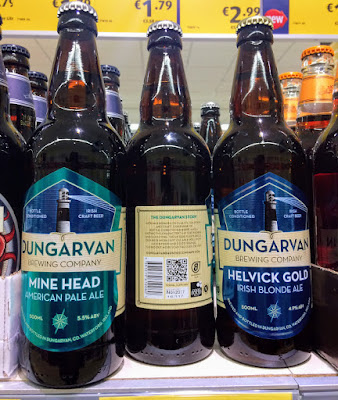 Posted by Patrick Comerford at 15:07