Saint Michael’s Church: part of the story of mediaeval Limerick 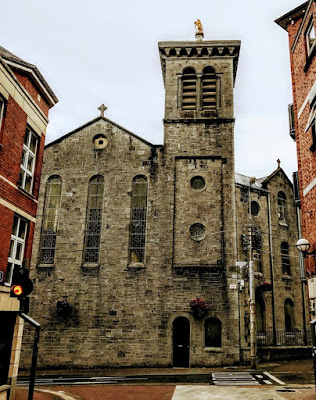 Saint Michael’s Church, Denmark Street, Limerick, stands at the bottom of Chapel Lane in the heart of Limerick’s shopping and commercial area. Its name is a reminder of one of the five original parishes in the mediaeval city of Limerick: Saint John’s, Saint Mary’s, Saint Michael’s, Saint Munchin’s and Saint Patrick’s.

The Anglo-Normans probably built the first church in Limerick dedicated to Saint Michael the Archangel. This church stood on an island where the Abbey River spreads out above Baal’s Bridge. From old maps and drawings, this island was between Englishtown and Irishtown. This area was outside the city gate called West Watergate.

Saint Michael’s is first referred to in the Black Book of Limerick in 1205. It was originally a prebendal church, but by 1418 it was attached to the Archdeaconry of Limerick.

The church fell into disuse after the Reformation. By the early 17th century, it was in ruins, and it was totally dismantled at the time of Cromwell’s siege of 1651. The old graveyard at Michael Street is hidden behind buildings but was restored by the Limerick Civic Trust in 1986. The oldest headstone is in memory of Catherine Barry who died in 1766, aged 92.

In the Church of Ireland, the name of Saint Michael’s Church was used for a new parish church built for the Newtown Pery area in 1844, replacing Saint George’s Church on George’s Street (now O’Connell Street). 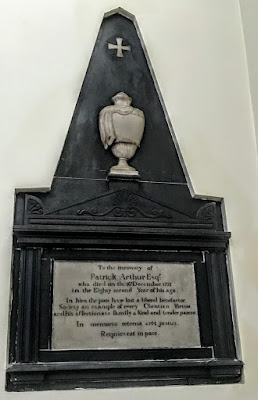 The monument to Patrick Arthur, who donated the site for Saint Michael’s Church (Photograph: Patrick Comerford, 2017)
In the post-Reformation Roman Catholic Diocese of Limerick, Saint Michael’s was a joint parish with Saint John’s until 1704, when Father Murtagh O’Hehir became the first priest in a new parish.

The Arthur family, who were involved in developing Arthur’s Quay and the Georgian houses built in the area in the mid-18th century, owned the land on which the church was built. Instead of building houses on the site, Patrick Arthur donated the land for the original Penal-era church.

Work on building Saint Michael’s began in 1779. The Revd Thady Lynch laid the foundation stone in 1779, building work was completed in 1781 and the church was opened on Saint Michael’s Day, 29 September 1781.

The church was enlarged in 1805, and Daniel O’Connell held some of his rallies there. A church bell was acquired and was first rung on 1 January 1815.

When the new church was being built, human remains were found. They were thought to be bodies of soldiers who fought in defence of the city in the siege of Limerick in 1690. They were reburied under the Sacred Heart altar in 1881. 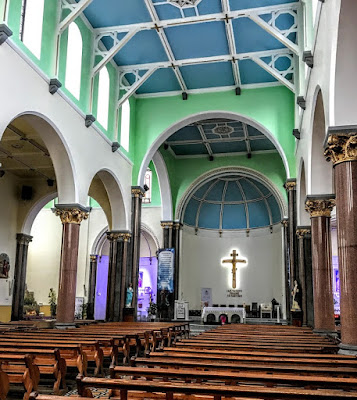 Inside, Saint Michael’s Church is plain and simple (Photograph: Patrick Comerford, 2017)
Saint Michael’s is a fine Italianate church, with Romanesque architectural features. It is a T-plan limestone church, facing north-west with double-height side aisles and three apses to the south-east chancel elevation. The earlier, Penal-era church forms part of the south transept of the present church.

Inside, Saint Michael’s is plain and simple, but in the past it was known as the ‘chapel of statues’ because of the large numbers of statues inside. Most of these statues were removed in the post-Vatican II years.

The High Altar stands on the site of the old sacristy from 1779. A side altar shows a scene from the Last Supper and may have once been part of the old High Altar. 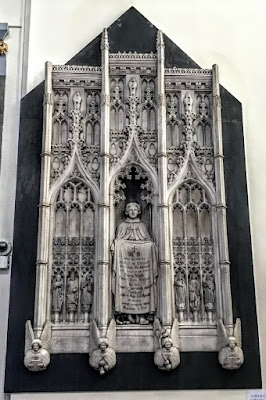 Father Patrick Hogan’s monument in Saint Michael’s Church was designed by the architect William Bardwell (Photograph: Patrick Comerford, 2017)
There are two large plaques in the north transept. The first plaque is in memory of Father Patrick Hogan and was commissioned after his death in 1838. It was designed in the style of a 15th century memorial by William Bardwell (1795-1890), the architect who also designed Glenstal Castle for the Barrington family.

The second monument is to Patrick Arthur, and was erected by the people of the parish after he died in 1779. Before the church renovations in 1881, there was a flagstone over his grave in the centre of the church. 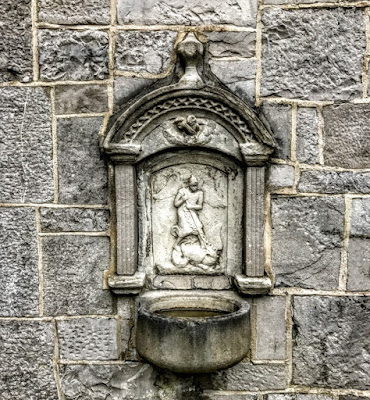 The church has a four-stage bell tower and a three-bay three-storey presbytery. The bell tower is capped by a striking gilt figure representing the Archangel Michael vanquishing Satan.

The parish has changed greatly since the 18th century church was built. Saint Michael’s was once described as ‘the biggest parish in Munster.’ But the parish was divided and subdivided to form new parishes as the city of Limerick grew and expanded.

Saint Michael’s ceased being a mensal parish with the bishop as its parish priest in 1973, and the first parish priest was the Very Revd Michael Manning.

The present area of the parish is now roughly from Cecil Street to Bank Place and the population of the parish is around 1,000. It is now the smallest parish in Limerick, and is in the heart of the central shopping area of the city. As a place of worship and a feature in the streetscape, it is a significant building, adding a religious element to a largely commercial and retail area.

Limerick is now home to about 10,000 Poles, and more than 500 people attend the Polish Mass in Saint Michael’s every Sunday. Father Andrzej Sroka has been the Polish chaplain in Saint Michael’s Parish since 2012. The Cantate Deo choir sings in the church once a month and is part of this thriving Polish community. 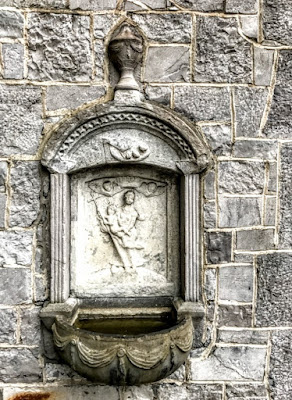 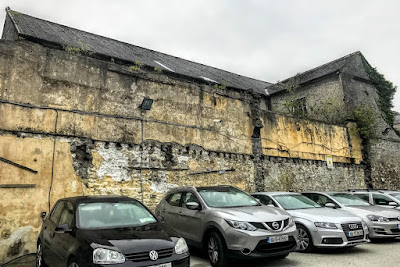 The former Quaker Meeting House in Limerick is hidden behind other buildings in Cecil Street (Photograph: Patrick Comerford, 2017)

After my visit last weekend to the house in the Plaka in Athens that was once home to Sir Richard Church, the Irish-born Greek general who was born into a Cork Quaker family, I decided to look for the former Quaker Meeting House off Cecil Street when I was in Limerick earlier this week for a diocesan meeting.

The former meeting house, which was built off Cecil Street at the beginning over 200 years ago, is normally accessible by a laneway under an interesting Art Deco rendered screen wall. But this laneway was closed on Tuesday afternoon [22 August 2017], and so I found the Meeting House by walking under an arch in Cecil Street at the other end a terrace of four single-bay houses and that leads in a locked car park that was once the site of ‘Hartigans Horse Repository.’

The Society of Friends was formed in 1646 through the peaching of George Fox and the first Quaker meeting in Ireland was held in Lurgan in 1654. The Quakers or Religious Society of Friends came to Limerick City in the 17th century, with the preaching and mission work of Francis Howgill, Edward Burroughs, Edward Tickleman and Edward Cook. They converted John Love, Richard Pearce and John Phelps, and Quaker meetings were first held in private homes, including the home of Thomas Holmes and the home of Richard Pearce. Richard Pearce in Bow Lane (now Augustine Place), near Saint Mary’s Cathedral, in 1655.

By 1656, it was estimated there were about 70 Quakers in Limerick. That year, Henry Ingoldsby the Puritan Cromwellian governor of Limerick, forbade people from interacting with Quakers on penalty of being turned out of the city. Many Quakers were driven from their homes and imprisoned for their beliefs.

Life became marginally more tolerable for Quakers after the restoration in 1660. When George Fox visited Limerick in 1667, he was a guest of Richard Pearce in Bow Lane. The first Quaker meeting house in Limerick was built in Creagh Lane two years latger in 1671. By 1687, three Quakers, James Craven, William Craven and Samuel Tavenor, were members of Limerick Corporation. Thomas Storey, the Quaker preacher, was a brother of George Storey, the Dean of Saint Mary’s Cathedral.

The meeting house on Creagh Lane was replaced in 1735 by a second, larger meeting house. The later, third meeting house off Cecil Street was built in 1806-1807 on a plot of land owned by John Meade Thomas.

It was built of rubble stone as a detached six-bay, two-storey rubble building. Inside, there was a simple double-height meeting room with a gallery, although I do not know to what degree these have survived. It was 54 feet in breadth by 92 feet in length. In 1832, a Friends’ burial ground was set aside near Peter’s Cell.

Meanwhile, in the late 18th century, a leading Quaker merchant, Joseph Massy Harvey, gave his name to Harvey’s Quay. In 1820, Isaac Unthank was the co-founder with Henry Maunsell of the Limerick Savings Bank, which started from a small room in Cecil Street.

The three Quaker Alexander brothers who ran a thriving corn business were prominent in famine relief as well as the Limerick Savings Bank, Barrington’s Hospital, the campaign for the abolition of slavery and other reforms.

Among the members of the Bennis family who were Quakers was George Geary Bennis, whose gifts made Limerick one of the first cities to have a free library. He gave up his tea and coffee shop business opposite the former Cruise’s Hotel in 1822 to carve out a new career in Paris as the editor of Galignani, one of the leading newspapers of the day. In 1848, he saved the life of King Louis Philippe in a street fracas in Paris, for which he was made a chevalier. 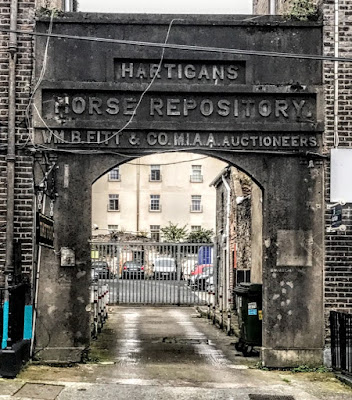 The arch on Cecil Street that provided me with limited access to a view of the former meeting house still bears the name of Hartigans Horse Repository.

This single-bay arched cement rendered portal was built ca 1920, leading into a complex of buildings at the rear of Cecil Street. This is a segmental-arched opening with lettering in relief that proclaims: ‘Hartigans Horse Repository, Wm B Fitt & Co MIAA Auctioneers.’

In the yard that is now a gated car park, horses were stabled during the day while their owners went about their business. It also served as regular stabling for the horses of city dwellers who did not have their own groom. It is an aesthetic curiosity on the city streetscape and a reminder of days before the car took over the streets.

The former meeting house is hidden from Cecil Street by a terrace of four slender, single-bay, three-storey over basement houses, including the pharmacy at No 37 next to the former laneway that once led to the meeting house.

These houses were built ca 1820, and No 37 has an attractive three-sided canted oriel shop window on the ground floor. All four buildings have Wyatt windows. Behind these terraced houses there is a rubble stone wall to the lane at the former Quaker Meeting House.

By 1953, there were only nine members of the meeting living in Limerick, and the meeting house off Cecil Street was sold to the Irish Red Cross the following year. But the Society of Friends once again has its own meeting house in Limerick city, beside the Quaker burial ground at Southville Gardens in Ballinacurra.

Meanwhile, the former Quaker Meeting House in Cecil Street has been transformed into the Gaff, a resource for emerging and community artists, working with communities in Moyross, Saint Mary’s, Garryowen and Weston, and fostering the development of new performance work.

The building remains one of Limerick’s forgotten Georgian gems. 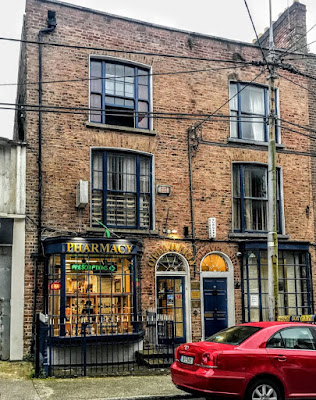 The former meeting house is hidden from Cecil Street by a terrace of slender houses (Photograph: Patrick Comerford, 2017)