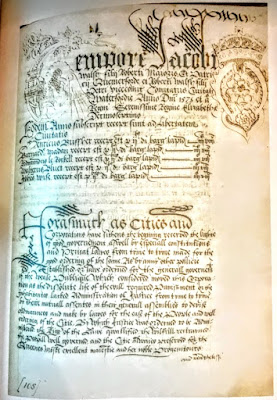 I think we all find it fascinating to find our own names on someone else’s gravestone or memorial, to find that other people with the same name want to be friends on Facebook, or to find our names in a footnote or in the index of a book.

I was browsing through the local history section in the Book Centre in Wexford last month [18 January 2019] when I came across The Great Parchment Book of Waterford, Liber Antiquissimus Civitatis Waterfordiae, edited by Niall J Byrne and published in Dublin by the Irish Manuscripts Commission in 2013. 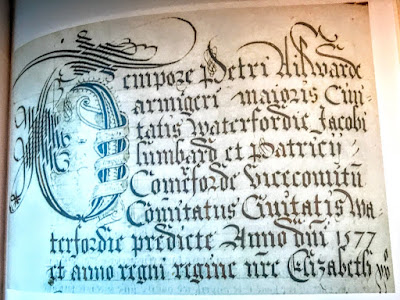 Throughout this period, the Mayor of Waterford was also ‘admiral of the great port and haven.’

Obviously, there is some overlapping, so that many of the same family members held different offices on different occasions. But it shows how politically engaged members of the Comerford family were in late mediaeval and early modern Waterford.

Many of the details in these archives relate to the lease of lands and houses. By today’s ethical standards, it would be unacceptable that family members benefited from property transactions at a time when other members of their family were holding influential public offices.

While he was mayor in 1448-1449, Foulk or Fulke Comerford was attacked with a dagger before the council by John May, a former bailiff, who was jailed for shedding the mayor’s blood. With Peter Forstall and 31 other citizens of Waterford, he was killed in a battle with the O’Driscolls, who had landed at Tramore at the invitation of the Le Poers, on 19 June 1452.

The book shows how commercial and political life in Waterford was closely integrated with life in the neighbouring towns and cities in New Ross, Kilkenny and Wexford, and with the interests of the Ormonde Butlers.

The book, which is preserved in the Waterford Museum of Treasures, reveals the disquiet within the municipal community in Waterford with the religious at the religious and political changes introduced by the Tudor reforms in the late 16th and early 17th centuries, and with the upheavals in the mid-17th century that would lead eventually to the execution of Charles I and Cromwell’s coming to power.

Of course, there are many influential members of the Comerford family who do not come to notice in thus book, including the Jesuit theologian Nicholas Comerford (1544-1599) and Patrick Comerford (1586-1652), who was Bishop of Waterford and Lismore (1629-1652). 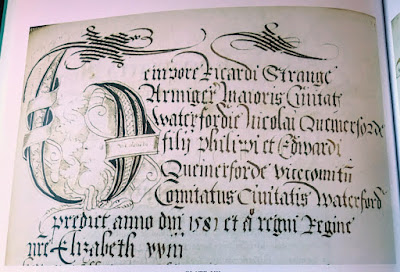 The motte or hill between Ikerrin and the Barack Obama Plaza is clearly visible where the M7 weaves in and out between Tipperary and Offaly (Photograph: Patrick Comerford, 2019)

On the road between Limerick and Dublin, I regularly pass an interesting motte or hill on the M7 near Ikerrin in Co Tipperary and close to the Barack Obama Plaza in Moneygall, Co Offaly.

On this short stretch of the road, the county and provincial boundaries between Tipperary and Offaly, between Munster and Leinster, weave in and out, backwards and forwards, through the motorway – the very model of a ‘soft border’ and how the lines drawn on maps in the past are irrelevant to the needs of today’s commerce and traffic.

This motte or hill looks look an up-turned or inverted pudding bowl, and is, perhaps, a reminder of past divisions and boundaries in this locality. But I still have to explore its true history and significance.

The motte stands on a hill overlooking a small stream in townland of Moatquarter, close to Castletown and with a clear view of the countryside for miles.

It is shaped like an inverted bowl, is about 10 metres high and measures 44 metres across at the base. It is surrounded by a deep fosse and a protective bank about two metres high. The bailey to the north was extensive but the surrounding bank has been levelled.

Local tradition has claimed that this may have been the inauguration mound of the O’Carrolls of Ely O’Carroll country, a powerful local family of Gaelic Irish chieftains. But perhaps that mound was just an Anglo-Norman motte.

The motte is described on the website archaeology.ie as standing near the south end of a roughly north-south ridge, overlooking a valley, in pasture. The land rises steadily east of the site, although the slope is still overlooked by a motte. A church and graveyard, a rectangular enclosure and sunken ways can be seen on the opposing ridge to the south-south-west.

The site consists of a steep-sided, flat-topped mound with a classic pudding-bowl profile. It is enclosed from east to south to north-west by a fosse that has been dug into the ridge. The enclosing bank on the south-east side appears to be the remains of the original ridge and is actually a false bank or counterscarp. There is no visible trace of a bailey. A National Monuments Preservation Order was placed on the site in 2008.

There is also a church and graveyard site nearby at Drumroe with a bullaun stone.

In her book Royal Inauguration in Gaelic Ireland c. 1100-1600: a Cultural Landscape Study, Elizabeth Fitzpatrick says this ‘motte’ at Moatquarter, in the Barony of Ikerrin in north Tipperary, has been described in conflicting terms as both ‘the best known Anglo-Norman earthwork in Ely O'Carroll’ and ‘the old inauguration site of the kings of Éile.’

However, she points out that the traditions that this mound was once the inauguration place of the Ó Cearbhaill in only 90years old and ‘derives solely from a local “tradition” documented in 1929.’

This local tradition can only be traced to A History of the Diocese of Killaloe by the Revd Aubrey Gwynn and Dermot Gleeson, where it is stated: ‘Hereabouts was certainly the centre of the Ua Cerbaill rule, and also of the Norman lordship.’

Fitzpatrick also points to the proximity of the mound to an Anglo-Norman caput at Dunkerrin, less than 3 km miles away, and the fact that Drumroe is on the other side of a river, in a different parish and county. She questions the defensive uses of the mound and she compares it to another inauguration mound at Coggins Hill, Co Sligo.

Derek Ryan points out that the mound is right on the border between two baronies – Clonlisk and Ikerrin – but is actually in Ikerrin. In later times, Ikerrin is referred to as O’Meagher country during the reign of Henry VIII. He asks whether it could also have been an inauguration mound for the O’Meaghers in later times.

There are no precise records of the mediaeval function of this mound in an area of many boundaries and borders, where the control of lands and the claims of clans in control ebbed and flowed over the decades and the centuries. I must get out during the journey some day, and explore the site on foot myself.