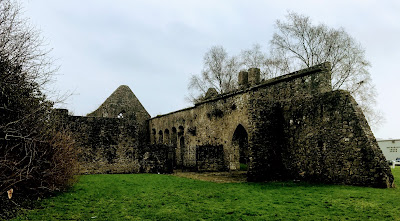 Rathkeale has many once-elegant Georgian and Victorian townhouses, two banks of architectural interest, and a former courthouse and Bridewell that I visited and that are now used by community organisations.

At the top of the town are the ruins of Rathkeale Abbey, which was founded in 1280 by Gilbert Hervey for the Augustinian Canons of the Order of Aroasia. It is as though Holy Trinity Church and the the ruined Augustinian Abbey bookend the town at either end as complementary churches.

The of Augustinians of Aroasia in the Diocese of Arras, were founded in France in 1097.

Soon after the abbey in Rathkeale was founded by Gilbert Hervey, it was endowed his niece, Elinor Purcell, with the tenth loaf of every baking, the tenth flagon of every brewing, the tenth pork, the tenth mutton and a large portion of every ox killed in the Manor of Mayer or Croagh. In 1290, Benedict, the Prior of Saint Mary’s, Rathkeale, was involved in a law suit against Thomas Le Chapelin, Guardian of the house of Saint Senan on Scattery Island.

In 1307, Elinor Purcell’s son, Hugh Purcell, was sued by the Prior of Saint Mary’s for not fulfilling the grant made by his mother. The lawsuit ended in a compromise in which Hugh agreed to give to the Prior each year two crannogs of bread corn, three crannogs of oats on the Feast of Saint Michael and four porks on the Feast of Saint Martin forever. Thomas Purcell was Prior of the Abbey in 1318, when he was accused of violence at Croagh.

In 1463, Pope Pius III addressed a letter to the prior of Rathkeale, giving instructions about appointing David Fitzmaurice as the Rector of Randbarad in the Diocese of Ardfert. 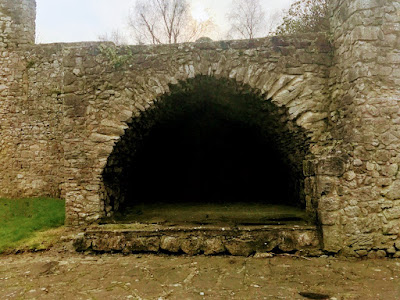 Some of the buildings at Rathkeale Abbey may date only from the 16th century (Photograph: Patrick Comerford, 2017)

The priory owned the mill and a great island and a large part of the water weir. There were six ploughlands and six quarters and it all belonged to the church with all kinds of tithes. 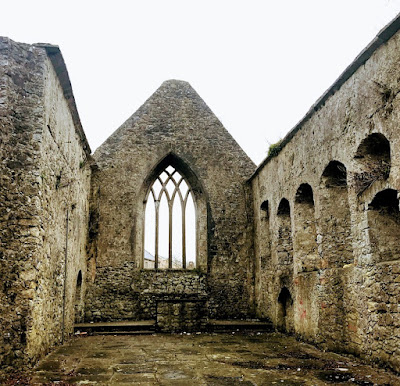 According to an inquisition during the reign of Queen Elizabeth I, the priory was in the possession of Gerot Baluff or Gerald Balfe, who was killed during the Desmond Rebellion. After the death of this last prior, the abbey was granted to Sir Henry Wallopwho also recevied large tracts of land on the banks of the Slaney at Enniscorthy, Co Wexford, and was the ancestor of the Earls of Portsmouth.

Peyton’s Survey in 1586 noted: ‘It was found that the site of the Monastery – a castle called Cam-ne-Monaster, alias The Castle at the Head of the Monastery – together with 20 gardens, one of which was called the Prior’s Garden, contained three acres.’ In addition, there were 20 more acres in Temple Trenode in Rathkeale, eight acres in Ardagh, eight acres in Callow, and 10 acres in Nantenan, between Rathkeale and Askeaton, that were described as ‘very bad land.’

In recent years, the ruins of the abbey were renovated by Rathkeale Community Council and FÁS in 1988. The ruins of Rathkeale Priory include is a rectangular church with a vaulted room at the north side. It has a simple four-light traceried east window. There was once a south transept, but only the arch of this remains. These ruins have been preserved and the surrounding grounds landscaped and developed as the town’s park. 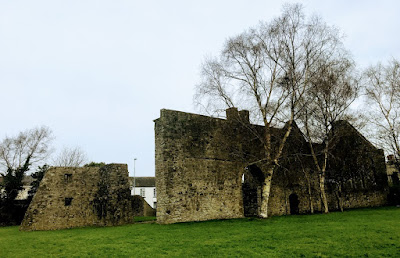 Rathkeale Abbey has been renovated and preserved in recent decades (Photograph: Patrick Comerford, 2017)

An announcement in today’s
‘Church of Ireland Gazette’

The following announcement is published in today’s edition of the ‘Church of Ireland Gazette’ (17 February 2017):