A walk on the Velvet Strand at Portmarnock 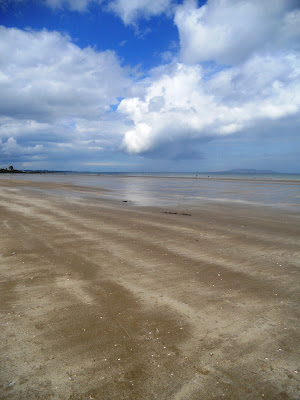 It was a dull and overcast morning. After the Choral Eucharist in Christ Church Cathedral, two of us decided to go for lunch and a walk on a beach north of Dublin.

By the time we got to Dorset Street, there were heavy traffic jams, formed by people trying to get to Croke Park for the Closing Eucharist of the International Eucharistic Congress. 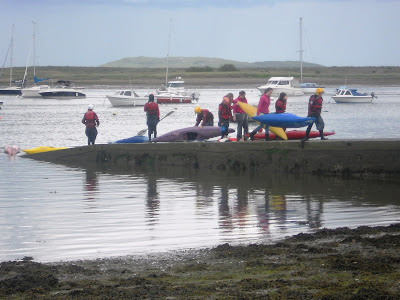 Eventually, we made our way through Phibsborough, Cabra and Finglas, onto the M50, and on to Malahide. There was a lot of activity in the water below the club house of Malahide Yacht Club at Saint James’ Terrace, and Malahide looked like an attractive option for a beach walk later in the afternoon.

But as we left Cape Greko, the Greek and Cypriot restaurant on New Street, the rain began to pour down. We were not surprised – the rainfall in Dublin so far in June far has been more than 200% of the average.

We abandoned our plans for a walk on the beach, but still thought we might catch a glimpse of the sea, and headed south along the coast towards Portmarnock. 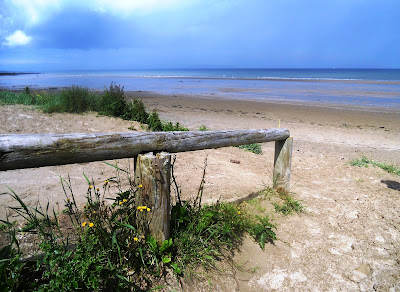 Walking through the sand dunes onto the beach at Portmarnock, Co Dublin, this afternoon (Photograph: Patrick Comerford, 2012)

Portmarnock is 15 km north of Dublin city centre, south of Malahide and north of Baldoyle. Although Portmarnock has no harbour, the name means the Port of Saint Marnoch or Mernoc, a missionary bishop who is said to have arrived here from Iona in the fifth, sixth or even seventh century. Saint Marnock was associated with Saint Columba and also gave his name to Kilmarnock, Inchmarnock and Damrnock in Scotland. The ruins of his church are said to stand in the graveyard off the Strand Road.

We stopped at the Martello Beach in Portmarnock, where a narrow beach leads onto a sandy peninsula with sand-dunes and a lengthy sandy beach known as the Velvet Strand. Its beautiful smooth sand is popular with wind-surfers and kite-surfers, although this afternoon there were just some families, a few people walking their dogs and a small group playing volleyball.

From the Velvet Strand, there are views out to Lambay Island and Ireland’s Eye. At first, the low clouds and the grey skies made it difficult to make out the yachts sailing around Ireland’s Eye and Howth Head, but the sun started breaking through, and looking north past the Martello Tower it was possible to see the outline of the Donabate and Portrane peninsula and the Round Tower at Portrane sticking up above the horizon. 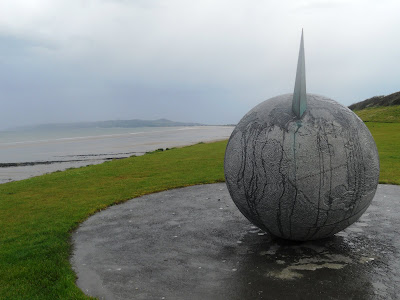 The ‘Eccentric Orb’ on Portmarnock Beach commemorates the first circumnavigation of the globe by a plane in 1930 (Photograph: Patrick Comerford, 2012)

Above the beach, the Southern Cross Monument or “Eccentric Orb” was erected in 1999 to commemorate the first circumnavigation of the globe by a plane in 1930.

Thousands of people were on the beach in Portmarnock to see the take-off at 4 am on 23 June 1930 to see Charles Kingsford Smith, an Australian pilot, and his crew take off in the ‘Southern Cross’ on the second west-bound transatlantic flight, first to Newfoundland and then on New York and to Oakland, California, completing a circumnavigation of the globe.

The sculpture recalling this flight is in the shape of the globe, marked with all the continents and the flight path. The monument, designed by Remco Dfouw and Rachael Joynt, is built from limestone, is 2.5 metres high, has a circumference of 2 metres, and weighs eight tons. The bronze needle points directly to the North Star.

By the time we were leaving Portmarnock, the sun was shining, and it was now a bright sunny afternoon as we drove through Baldoyle, Sutton, Dollymount and Fairview to the city centre. 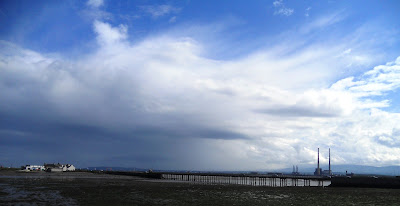