The houses along the beach in Loughshinny were reflected in the glimmering wet sands these evening (Photograph: Patrick Comerford, 2012)

Loughshinny is one of the better kept secrets of Fingal.

Approaching it from the Skerries-Rush road and the junction at the long-closed Yacht pub, you might think initially that this is yet another, unremarkable example of suburban ribbon development in north Co Dublin.

But at the end of the long straight road, there is a surprise waiting for you. 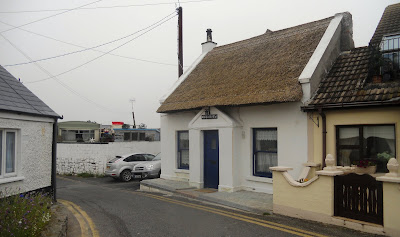 With its hidden harbour and thatched cottages this could be a village on Achill Island (Photograph: Patrick Comerford, 2012)

With its hidden harbour, its hidden beach, its hidden cliffs, its narrow twisting streets and its white-washed thatched cottages, this could be another village on Achill Island.

Although it was late evening and still raining lightly, it was impossible not to get out and walk on the soft sandy beach of the little bay.

The tide was out, and a few adults and a small child were playing on the shoreline as the adults took it in turns to go out on a jet ski. 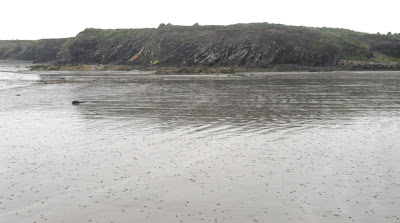 The cliffs on the south side of the bay reflected in the sands of the beach at Loughshinny (Photograph: Patrick Comerford, 2012)

To the south of the bay, the angular folds of the layered limestone and shale cliffs, rising to a height of 20 metres, were jutting out into the Irish Sea. Above the cliffs on the headland of Drumanagh are the remains, of the largest promontory fort in Ireland. Some say the headland was a Roman outpost but local tradition says this was the childhood home of Emer, whose courtship with Cuchulainn is told in The Tain, and this is where Cuchulainn jumped over the ramparts with the aid of his javelin. The Martello Tower on the headland dates from 1803 and the Napoleonic wars.

On the north side of the bay, a few fishing boats were tied up against the small pier. Turning around on the shoreline, the houses behind the beach were reflected in glimmering wet sands. If Loughshinny was a coastal village in Greece or France, these houses would be tavernas, cafés and restaurants, and a perfect location for a rendezvous on a summer evening. 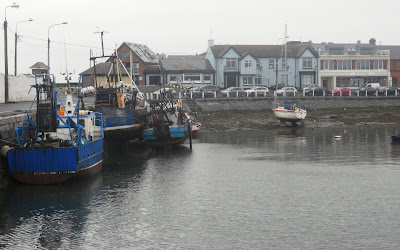 A stroll along the pier at the harbour in Skerries this afternoon (Photograph: Patrick Comerford)

We had come to Loughshinny because earlier this summer evening it began raining when we arrived in Skerries. We had thought of a walk on the beach, but we only managed to walk from the car park on Red Island to “Storm in a Teacup” where we sheltered in the imitation beach huts as we each had an espresso swirl – ice creams with espresso thrown over and decked with cinnamon and crushed chocolate – before taking a stroll in the raindrops along the pier. 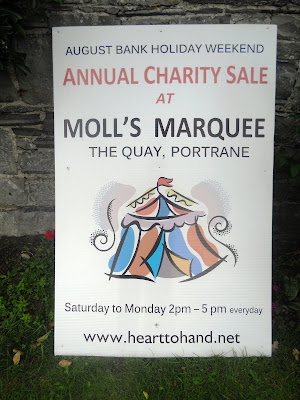 An hour before, I was sipping a chilled white wine in the garden of the Lynders house at The Quay in Portrane in 25C sunshine, looking out at the beach.

The big red-and-white marquee is already up, and a team of volunteers are sorting out the stalls and the items for the big sale of work in aid of Hand-to-Heart on the August bank holiday weekend.

This is a major fundraising effort to support projects in Romania and Albania. And I’ve been called in again to help with the bookstall in the marquee. Even if the summer sun fails to shine in abundance, it’s worth coming along.