A threat to one is a threat to all, and
we should remember this in Ireland 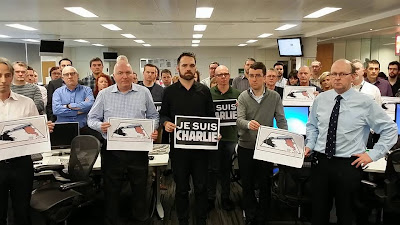 Journalists at ‘The Irish Times’ making their silent protest this week

I was moved by the photograph that went viral yesterday of journalists in The Irish Times standing in silent tribute in the newsroom and proclaiming: Je suis Charlie.

Let me be quite clear about a few things.

1, I find many of the cartoons associated with Charlie Hebdo to be offensive, gratuitous and tasteless. There are limits to free speech. The classic example is that one cannot walk into a cinema full of schoolchildren and start shouting: “Fire!” And there are limits to the criticism one can express about religious beliefs. For example, no-one can stand outside a synagogue shouting neonazi slogans. These are not just matters of taste and, manners and ethics, they need to be enshrined in law, and the rise of the far-right throughout Europe and the continuing school shootings in the US should remind us of this.

2, I do not agree that we need to be protected against blasphemy or bad taste by legislation or court rulings – and I certainly do not think God needs the protection of legal fences and boundaries; if God did, then this would not be God. The best way to protect any religious beliefs against bad taste and blasphemy is to respond rationally and with good taste and dignity. I am reminded of how Christ restores with healing the severed ear of a servant in the arresting party in Gethsemane (see Luke 22: 47-53).

3, The cartoons are offensive but portraying the Muslim Prophet Muhammad in art is not condemned as blaspheme at all times and in all places by all Muslims. There are many examples of his portraiture in classical Persian and Turkish art and manuscripts in the past.

4, I understand why young Muslims in greater Paris feel oppressed and alienated from French society. But I also believe that the overwhelmingly vast majority of Muslims throughout the world are as offended and shocked as you and I are by this week’s events in France.

5, I am shocked by the Islamophobic responses to these events, but believe that these are bigoted and racist responses that hardly needed a dramatic event to find expression.

6, I am also abhorred by those who rejoice that today’s high drama has ended in the deaths of the principle suspects. Had they been captured alive, their interrogation would have helped police uncover more about their networks of support and training … leading ultimately, I imagine, to horrible and detestable regime in Saudi Arabia.

7, No one can convince me that the death penalty is the response to what has happened. Hat is vengeance. We need to see justice being done. But we need to remember that civilisation is always the alternative to barbarity, and so it can never resort to barbarous methods such as torture, detention without trial, or the death penalty. That would make Western democracy as crass and as barbarous as Saudi Arabia.

8, Let us not imagine that what happened in France this week could not happen in Ireland too. No, I do not think, not even for a fraction of a moment, that the threat in Ireland comes from Islamic militants. But I am reminded of the threat at the end of last year to the Independent group of newspapers, its editor and its journalists from the Sinn Fein President, Gerry Adams. His threat was a threat to all who write for and who benefit from the liberties defended by a free media – whether this is the printed press, the broadcast media, or internet writers on websites and blogs.

Let me remind myself of what happened.

1, At a Sinn Fein $500 a plate fundraiser in New York, Adams recalled that Michael Collins dealt with critical press coverage from Independent Newspapers by holding the editor at gunpoint and dismantling the printing presses. But this was no slip-of-the-tongue by Adams for he repeated them in a later online blog posting.

2, It was disturbing to listen to his speech online and hear his audience laugh and applaud Adams. He told those rich Irish-Americans who laughed and clapped that in 1919 Michael Collins was annoyed by the Irish Independent. So, according to Adams, Collins “went in, sent volunteers in, to the offices, held the editor at gunpoint, and destroyed the entire printing press. That’s what he did.”

3, Adams was emboldened when this went down well with his audience, and so he continued: “Now I can just see the headline in the Independent tomorrow. I’m obviously not advocating that.” He pauses for laughter. Would they have laughed if he had joked about how another Independent journalist, Veronica Guerin, was murdered in cold blood?

4, Last year, at least 60 journalists were killed in the course of their work. They include journalists working in the print, broadcast and online media. Each year, I am invited to take part in a service organised to recall the lives of deceased staff members of The Irish Times. Each year, this service is a reminder that our free press comes at a price … it may not involve the deaths of journalists, but certainly it saps the commitment and lifeblood of all who are engaged in maintaining the standards of journalism in a free society.

5, The World Association of Newspapers and News Publishers and the World Editors Forum – together representing 18,000 publications, 15,000 online sites and some 3,000 companies in more than 120 countries – condemned Adams.

6, Despite this, Adams was insistent in standing over what he said: “I have no intention of withdrawing my remarks.” He never apologised for his comments, and never withdrew them. He continued to joke about them, probably in the hope that they would be forgotten. But I did not forget them this week.

7, Sinn Fein is leading in the opinion polls in the run-up to the looming general election. Should I be frightened? I do not agree with the cartoonists at Charlie Hebdo, but I can say: Je suis Charlie. I never worked for the Sunday Independent, but who is also going to join me in saying: I am the Sunday Independent?

8, As the chair of Independent News & Media, Leslie Buckley, after those sickening remarks by Gerry Adams, the entire free media in Ireland has been threatened. He said Adams’s comments about holding an editor at gunpoint are “careless” and “at worst” are insidious.” He added: “I believe this to be a veiled threat by Mr Adams not only to journalists at INM but the entire free media on this island, whether broadcast, online or print.” Mr Buckley said that the role of a free media in our democracy is of paramount importance. “A free press ensures government and public officials are held accountable, the public is informed and citizens are given a voice,” he said.

Some years ago, I received a torrent of abusive (and illiterate) messages when I wrote about a Sinn Fein commemoration in Skerries, at which a colour party was dressed in uniform black, with berets and dark glasses, and marched in military precision, carrying the flags of the four provinces.

The abuse continued. I was told that “if it was not for the likes” of the IRA I “would have not got your silver spoon education” – considering I paid for my own third-level and post-graduate education while I was working as a journalist, and my parents worked hard to pay my school fees, that certainly was a revelation.

Adams refused to withdraw his remarks, but with mixture of self-pity and menace, he wrote in his blog about “a vile smear against me and against Sinn Fein” by “these modern-day McCarthyites.”

He still does not accept that his remarks were a threat not only to Independent journalists, but to all who work in the media, whether it is the press, the broadcast media, or on the internet. If, as Adams hopes, Sinn Fein is in government North and South in 2016, the centenary of the Easter Rising, we can expect a poor lookout for free speech.