A full weekend of Easter
celebrations in Barcelona

A float in the Good Friday procession in Barcelona (Photograph: Patrick Comerford, 2016)

I am back from Barcelona following a full weekend that began with marking Good Friday with the solemn processions in the old town, and that included the Easter Vigil in Barcelona Cathedral, attending the Easter Morning Mass on Sunday, and visits to Antoni Gaudí’s monumental Basilica of Sagrada Familia and a number of the splendid Gothic churches that found throughout the capital of Catalunya.

I had been in Dublin for much of Holy Week, including the Palm Sunday Eucharist and the Chrism Eucharist on Maundy Thursday in Christ Church Cathedral.

But an early morning flight on Friday meant I was in Barcelona Cathedral in time for the Good Friday services. I was staying is in the Hotel Suizo on Plaça de l’Angel in the old Gothic quarter of Barcelona, close to the remains of the ancient Roman walls and just two or three minutes’ walk from the cathedral, which dates from 1298.

On Good Friday, it was worth recalling that Barcelona Cathedral is dedicated to the Holy Cross (Santa Cruz) and to Saint Eulalia, Barcelona’s martyr and first patron saint.

There we joined the procession of the Cross on Good Friday from the cathedral cloisters into the nave of the cathedral and out onto the steps of the west front for the afternoon solemn prayers and readings.

Later in the day, after walking by the port and the marina, we stopped at the Plaça de la Porta de Pau (Square of the Gate of Peace), where a tall monumental column is topped with a statue of Christopher Columbus, marking the spot where Columbus returned after his first voyage to the Americas.

From there, two of us returned to the Barri Gotic joined one of the many Good Friday evening processions through the narrow cobbled streets and small squares of the old city to the square in front of the main façade of the cathedral.

The outpouring of collective and individual piety in these processions is deeply moving. The procession we joined was led by a uniformed brass band playing solemn, funeral-style music or marchas procesionales, followed by a large float bearing a life-size Pieta composition from the Church of Sant Jaume on Calle Ferran, with a weeping Madonna cradling the dead body of Christ taken down from the Cross.

Jewish culture flourished in Barcelona for centuries, and Calle Ferran Ferran, one of the busiest shopping and commercial streets in Barcelona, is in what is commonly known as the Call Menor, an extension of the original Jewish Quarter (El Call). The old synagogue of Barcelona stood for centuries on the site of this church until an attack on the Jews Quarter in 1391 and the building became a convent.

Along the way the procession stopped relatedly in the narrow streets, and when we arrived at the cathedral we were joined by similar processions from other parishes throughout the old town with their own pasos or floats.

Penitent and pious people thronged the square for the evening of prayers. Some were dressed in the distinctive cloaks and hoods (capirotes) of the brotherhoods and confraternities associated with the Holy Week processions in Spain. Some women were dressed formally in black with tall head-dresses and black mantillas. A small number of people in bare feet carried their own large wooden crosses, shackled to chains they dragged behind them.

Later we followed the sorrowful float back to the Church of Sant Jaume on Calle Ferran, and it was late on Friday night or early on Saturday morning when I got back to my hotel.

After a day spent exploring Barcelona, I returned to the Cathedral on Saturday night for the Easter Vigil, and was back again on Easter Morning for the Easter Mass. 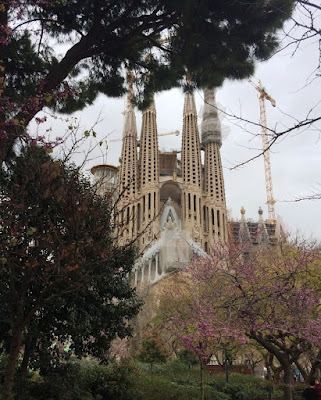 Later on Sunday, two of us walked through the streets of Barcelna, visiting some of Gaudí’s great architectural works in the city, including La Pedrera and Casa Battló, and other modernista buildings, including the Palau de la Música Catalana, the Hospital de la Santa Creu i de Sant Pau, the Casa Amatller and the Casa de la Punxes, before spending the rest of the afternoon in Gaudí’s greatest masterpiece, the Basilica of Sagrada Familia, followed by a second visit to Park Güell. 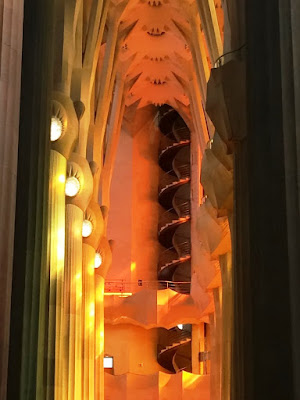 Inside The Basilica of Sagrada Familia on Easter Day (Photograph: Patrick Comerford, 2016)

There was time too for eating out, introducing myself, with all my vegetarian cautions, to tapas, and for learning a little more about Spanish wines.

Barcelona also more than 4 km of golden sandy beaches only 10 minutes’ walk from the city centre and four main beach areas. We spent much of Monday afternoon at Barceloneta, the first of these beaches. It is still March, but at one stage, when the clouds cleared and the sun burst through, the temperature briefly reached a high of 25.

There is much to write in the weeks to come about Barcelona, Gaudí and the mixture of Roman, Gothic and modernista architecture in this beautiful Mediterranean city.

Barcelona has over 4 km of sandy beach just a few minutes from the city centre (Photograph: Patrick Comerford, 2016)

Posted by Patrick Comerford at 20:36 No comments: