The crowning achievement of Romanesque architecture in Ireland 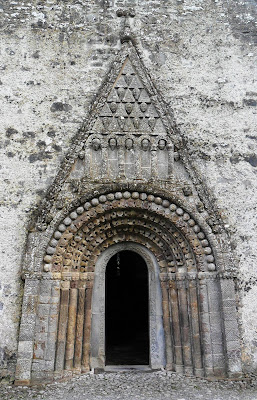 During a break from the Dublin and Glendalough clergy conference in Athlone yesterday afternoon, a few small groups of us headed west across the Shannon to visit Saint Brendan’s Cathedral in Co Galway. This is the cathedral of the Church of Ireland diocese of Clonfert, now part of the Dioceses of Limerick and Killaloe, and it is one of many cathedrals in a united diocese that spreads through three geographical provinces from Offaly and East Galway on the banks of the Shannon to the tips of the Kerry peninsulas.

It was difficult to find our way there, and once we turned south from Ballinasloe, the signposts to Clonfert were totally inadequate for an important site in Irish architectural and ecclesiastical heritage.

Eventually, when we reached Clonfert, we found that – apart from the cathedral – there is nothing in Clonfert today that testifies to its fame and reputation in the past. Some say this was once a city with a celebrated school and more than 3,000 learned monks, and that it was the site of a proposed university. Today, Clonfert is little more than a townland, but it was a visit that more than repaid all our efforts and detours. 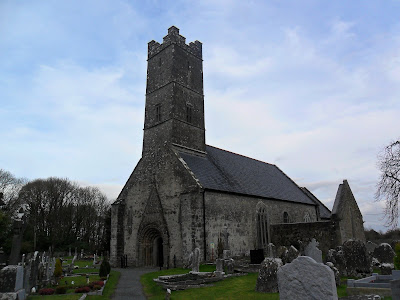 Saint Brendan’s Cathedral, Clonfert ... stands in the grounds of a monastery founded in 563 by Saint Brendan the Navigator (Photograph: Patrick Comerford, 2011)

The cathedral stands in the grounds of the monastery founded in the year 563 by Saint Brendan the Navigator, who is said to be buried in Clonfert. His monastery flourished for many centuries, even through times of great Viking raids – it was burnt down in 1016, 1164, and again in 1179. Despite these raids, Clonfert was one of Ireland’s great monastic schools and it became the launching pad for some of some of the great Irish missionary endeavours in Europe.

Despite its early foundations, the earliest part of the cathedral dates from around 1180, and most authorities now agree that the present building dates from the close of the 12th century when the church was rebuilt as a small Romanesque Cathedral.

The west doorway is the crowning achievement of Hiberno-Romanesque architecture. It is in eight orders, and has a sturdy variety of motifs, including animal heads, foliage and human heads. Many authorities have said that no other doorway exhibits such “fertility of invention and beauty of design.”

There is hardly a square inch of this unique doorway where the sculptor’s tool has not been at work. The variety of animals’ heads would suggest Scandinavian and Norman-French influences. Above the doorway, a pointed hood encloses triangles alternating with bizarre human heads, and below is an arcade enclosing more human heads.

The early 13th century east window in the chancel are said to be among the best late Romanesque windows. This window is described in Brash’s Ecclesiastical Architecture of Ireland, which says “the design of this window Is exceedingly chaste and beautiful, the mouldings superior to anything I have seen either of ancient or modem times.” 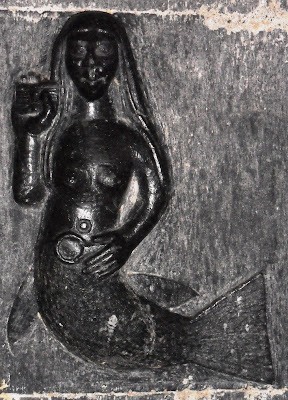 A bare-breasted mermaid carrying a mirror and combing her hair ... a figure in the 15th century chancel arch in Clonfert Cathedral (Photograph: Patrick Comerford, 2011)

During 15th century restoration work, the present Gothic chancel arch took the place of the original transitional arch and the Gothic windows were inserted in the chancel walls. This 15th century chancel arch is decorated with angels, a rosette and on the south side with a bare-breasted mermaid carrying a mirror and combing her hair – a reminder of the story that Saint Brendan, on one of his voyages, preached to the creatures of the sea. On the opposite side of the arch is a Celtic sculpture showing a Celtic knot like an anchor chain.

The supporting arches of the tower at the west end of the church are also decorated with 15th century heads, and the innermost order of the Romanesque doorway was also inserted at this time. The sacristy also dates from the 15th century.

Other features include the cathedral’s large 15th century carved stone font and a number of gravestones, some with marks of great antiquity and one bearing Celtic lettering in Latin across a Celtic cross.

Originally there were two transepts; the Romanesque south transept has long been in ruins and is roofless, while the north transept has disappeared altogether.

When the Revd Robert McLarney became Rector of Clonfert in 1882, he said: the cathedral was “literally the abode of the rat, the bat and the beetle. Noisome insects crawled all over the place. The walls were covered with ugly modem plaster and were reeking with damp; the atmosphere of the cathedral resembled that of a charnel house. The floor was greatly decayed. Small trees and shrubs grew on the roof which leaked badly.”

Clonfert Cathedral was included in the 2000 World Monuments’ Watch by the World Monuments’ Fund, which says the soft sandstone structure had weathered severely, and prior conservation efforts, which did not fully address all the building’s problems, as well as substantial biological growth, have compounded the deterioration. 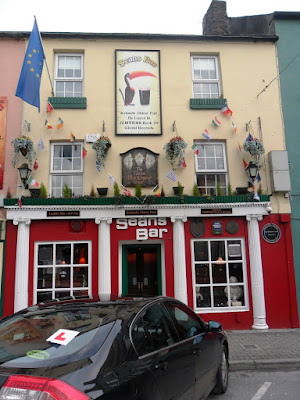 Sean’s Bar ... claims to date from the year 900 and to be the oldest pub in Europe (Photograph: Patrick Comerford, 2011)

When we returned to Athlone, a small group of us adjourned to Sean’s Bar,below the castle on the west bank of the Shannon. This claims to be the oldest pub in Europe – dating from the year 900. I suppose the Vikings and the monks found good reason to make their way from Clonfert to Athlone too – perhaps the river was easier to navigate than following the road signs through Banagher, Shannon Harbour and Ferbane.

Posted by Patrick Comerford at 05:59 No comments: