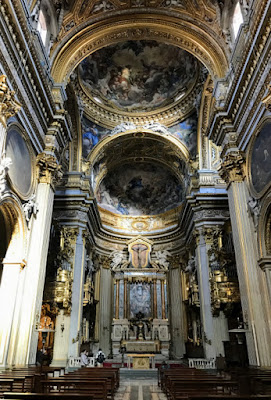 The Chiesa Nuova or the Church of Santa Maria in Vallicella is closely associated with the life of Saint Philip Neri (Photograph: Patrick Comerford, 2017)

3, Chiesa Nuova or the Church of Santa Maria in Vallicella: 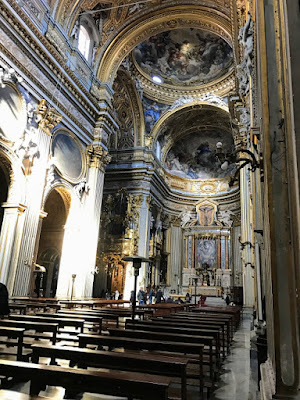 Saint Philip Neri intended to have a church with a plain interior and with whitewashed walls (Photograph: Patrick Comerford, 2017)

The problem of homelessness and the number of people sleeping rough on the streets of Rome seems to be as proportionately high if not higher than in Dublin. It was interesting to see that homeless people felt welcome in the Via della Chiesa Nuova on the steps of the Chiesa Nuova and the Oratory next door, for if the Church can find no place for the homeless where are they going to find a welcome?

The Chiesa Nuova (New Church), known formally as Santa Maria in Vallicella, is closely associated with the life of Saint Philip Neri, and inside we received a warm welcome and heard the story of both the church and the saint, his emphasis on love and his priorities for the poor and the marginalised in 16th century Rome.

The Chiesa Nuova faces onto the main thoroughfare of the Corso Vittorio Emanuele and the corner of Via della Chiesa Nuova. The first church on this site was built by Saint Gregory the Great, and by the 12th century the church was dedicated to Santa Maria in Vallicella (Our Lady in the Little Valley).

Since the 16th century, this has been the main church of the Oratorians, a congregation of secular priests founded by Saint Philip Neri in 1561. At that time in the Counter-Reformation, a number of similar new religious organisations were founded, including the Society of Jesus or Jesuits. In 1575, Pope Gregory XIII recognised Saint Philip Neri’s priests as a religious congregation and gave them this church and the small convent next door.

With the help of Cardinal Pier Donato Cesi and Pope Gregory XIII, Saint Philip Neri rebuilt the church. When Cardinal Cesi died, his brother Angelo Cesi, Bishop of Todi, continued to support the project. The first architect, Matteo di Città di Castello, was replaced later by Martino Longhi the Elder. The nave was completed in 1577, the church was consecrated in 1599, and the façade, designed by Fausto Rughesi, was completed in 1605 or 1606.

The ground plan of the church follows the Counter-Reformation design of churches established by the Jesuits in the 1550s at the nearby Gesù (Chiesa del Santissimo Nome di Gesù all’Argentina) on the Piazza del Gesù. The church has a single main nave with transepts and side chapels, leading towards the High Altar.

Saint Philip Neri intended to have a plain interior with whitewashed walls, but after his death, mainly in the period from 1620 to 1690, it was filled by patrons with works of art, including masterpieces by some of the great artists of the day in Rome. Today, the church is renowned for its altarpieces by Barocci, Pietro its ceilings by Pietro da Cortona, and the slate and copper altarpiece by Peter Paul Rubens.

Pietro da Cortona’s decorations include the Trinity in the dome (painted 1647–1651), the prophets Isiah, Jeremiah, Daniel and Ezekiel in the four pendentives (1655-1656 and 1659-1660), and his fresco of ‘The Assumption of the Virgin Mary,’ adorning the apse. The visual continuum between frescoes in the dome and in the apse frescoes is aided by the fact that there is no dome drum. The Virgin of the Assumption in the apse raises her eyes towards Heaven while God the Father in the dome extends his hand as if he is bestowing his blessings on her. 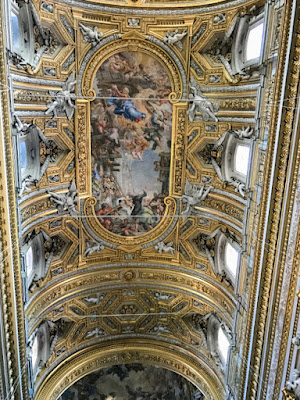 Cortona’s nave vault fresco of the ‘Miracle of the Madonna della Vallicella’ was completed in 1664-1665 (Photograph: Patrick Comerford, 2017)

Cortona’s nave vault fresco of the ‘The Miracle of the Madonna della Vallicella’ was completed in 1664-1665. It is set within an elaborate gold frame, a quadro riportato, and is painted with a Venetian-influenced view from below to above (di sotto in su). His designs for the vault decoration around the painting, with elaborate white and gilt stucco work, incorporating figurative, geometrical and naturalistic elements, were carried out by Cosimo Fancelli and Ercole Ferrata.

The walls of the nave and transept, as well as the sanctuary or presbytery ceiling, have canvases of Episodes of the Old and New Testament by Lazzaro Baldi, Giuseppe Ghezzi, Daniele Seiter, Giuseppe Passeri, and Domenico Parodi.

The first altarpiece on the right is ‘The Crucifixion’ by Pulzone with a ceiling fresco painted by Lanfranco; the third altarpiece is ‘The Ascension’ by Girolamo Muziano; the fourth is ‘The Pentecost’ by Giovanni Maria Morandi; the fifth is ‘The Assumption’ by Cerrini. In the transept, ‘The Coronation of the Virgin Mary’ is by d’Arpino, who also painted the first altarpiece, ‘The Presentation in the Temple,’ on the right.

In the right sanctuary or presbytery, the Spada family chapel was completed by Rainaldi in 1593 by Rainaldi. Inside, Maratta painted the Madonna with Child and Saint Charles Borromeo and Saint Ignatius Loyola (1675).

In the central sanctuary or presbytery, the bronze ciborium was designed by Ciro Ferri (1681). The Virgin and Child and two paintings to the side, Saints Domitilla, Nereo and Achilleo, and Saints Gregorio Magno, Mauro and Papia (1606-1608) are among the few works painted by Rubens that were created specifically for a Roman commission. When they were installed, the three slate panels caused a stir in Rome, which was not used to seeing the Flemish style of painting. The Rubens altarpiece was commissioned by Monsignor Jacopo Serra.

In the left transept, ‘The Presentation of Mary in the Temple’ (1593-1594) is by Federico Barocci, who also completed two altarpieces, including one in the Chapel of the Visitation (1583-1586).

The sacristy was begun in 1621 based on plans by Mario Arconio and completed by Paolo Maruscelli in 1629. In the sacristy is a marble sculptural group of Saint Philip Neri with an Angel by Alessandro Algardi. The wall frescoes are by Francesco Trevisani, ‘The Benediction by Christ’ is by Cerrini, and the frescoes in the ceiling, with with angels carrying the instruments of the Passion (1633-1634), are by Pietro da Cortona.

The fifth altarpiece on the left is ‘The Annunciation’ by Passignano. The fourth is ‘The Visitation’ by Barocci, and the ceiling frescoes with saints are by Saraceni. The third is ‘The Adoration by the Shepherds’ by Durante Alberti and the vault frescoes with a saint are by by Cristofano Roncalli. The second altarpiece is ‘The Adoration by the Magi’ by Cesare Nebbia. The first is ‘The Presentation in the Temple’ by d’Arpino.

Alessandro Salucci worked on decorations in the Chapel of the Presentation of Our Lady in 1635. He painted frescoes on the vault, depicting the story of Hannah, Elkanah and the young Samuel, painting over earlier decorations by Domenico de Coldie in 1590. 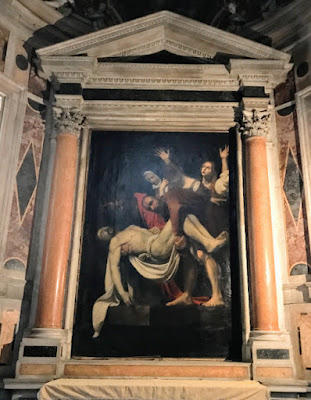 Perhaps the best-known painting in the church is Caravaggio’s altarpiece, ‘The Entombment of Christ,’ although this has not not remained in the chapel it was intended for. Caravaggio was commissioned by Alessandro Vittrice, a nephew of one of the friends of Saint Philip Neri, and depicted the entombment in a radically naturalistic format, foreign to the grand manner found in the remaining altarpieces. The original is in the Vatican Pinacoteca.

Saint Philip Neri is buried in the chapel to the left of the choir, in a tomb decorated with mother-of-pearl. The chapel was designed by Onorio Longhi in 1600. The first octagonal part of the chapel has a central vault painting of Saint Philip by Roncalli, and the altarpiece is a mosaic copy of ‘The Virgin Appearing to Saint Philip Neri’ by Guido Reni. In the inner and more removed part of the chapel, Cortona added a lantern to let in more light and the dome was redecorated, perhaps by Ciro Ferri.

Beside the church, the Casa dei Filippini or the House of the Oratorians includes the Oratory designed by the baroque architect Francesco Borromini.

Once again, in this church I received a warm but unobtrusive welcome. I was quietly offered headphones, directed to the main pieces of art, and the values of Saint Philip Neri and his Oratorians were explained gently, as well as being visible outside on the steps of the church and the oratory.

But two other fleeting thoughts passed through my mind as I sat in a pew at the back of the church thinking about its story and its beauty.

The first was the long line of stucco artists in Rome who handed on their art from one generation to the next, and was there something similar to a line of apostolic succession that eventually brought the art of the stuccodore to my ancestors in Co Wexford in the mid-18th century?

The second was an amusing thought about the way the word presbytery is used in architecture. The chancel is the space around the altar, and includes the choir and the sanctuary, and in architecture this area is sometimes called the presbytery. The word chancel derives from the French use of the Late Latin word cancellus (‘lattice’), referring to the latticed form of a rood screen. The word presbytery, on the other hand, designates the area in a church reserved for the priests. I wondered whether the link between the Roman Presbyteries, the priests and the Mass was ever to the fore of the minds of Calvinist Reformers in Scotland and Ireland in the 16th and 17th centuries as they decided to name their churches.