‘Snow had fallen, snow on snow, snow on snow, in the bleak mid-winter’ ... snow falling on Christ’s Pieces, Cambridge, in the early morning (Photograph: Patrick Comerford)

Some readers have asked me how they might organise a Service of Nine Lessons and Carols at this time of the year, and what readings they should use.

I was reminded of this request during this week’s visit to the Church of Ireland Theological Institute by the Bishop of Truro, the Right Rev Tim Thornton, Bishop of Truro, Bishop John Ford of Plymouth and Archdeacon Roger Bush of Cornwall, for the Service of Nine Lessons and Carols has its origins in Truro Cathedral and with the first Bishop of Truro.

The Festival of Nine Lessons and Carols tells the story of the fall, the promise of the Messiah and the birth of Christ in nine short Bible readings, interspersed with carols, hymns and other season music.

The tradition dates back to a service first devised by Bishop Edward White Benson (1829-1896) of Truro, later Archbishop of Canterbury, for use on Christmas Eve 1880. It is said he organised the 10 p.m. service that evening in the hope of keeping working men out of the pubs on Christmas Eve. At the timne, he was using a temporary wooden shed as his cathedral, for the foundation stone of Truro Cathedral had only been laid, and the new Gothic Revival Cathedral would not be consecrated until 1887.

Since then, his idea has been adapted around the world, and the Service of Nine Lessons and Carols has become a traditional and well-loved expression of Anglican spirituality in the run-up to Christmas.

The Chapel of King’s College Cambridge ... the Service of Nine Lessons and Carols as we know it found its shape here on Christmas Eve 1918 (Photograph: Patrick Comerford)

The best-known version of the service is broadcast annually from the Chapel of King’s College, Cambridge, where the first Festival of Nine Lessons and Carols was held on Christmas Eve 1918, adapting Bishop Benson’s outline first used in Truro.

The Dean of King’s College, Eric Milner-White (1884-1963), was a liturgist and hymn writer who later became Dean of York. He had been a distinguished and decorated army chaplain on the Western Front and in Italy during World War I, and those experiences shaped his belief that the Church of England needed a more imaginative to liturgy and worship.

The music at that first service in King’s College was directed by the organist of King’s Chapel, Arthur Henry Mann (1850-1929), a composer and hymn-writer who is also remembered for his hymn O Jesus, I have promised (see Irish Church Hymnal, No 593).

The BBC first broadcast the service from King’s in 1928. Since then, the service has been broadcast every year, Apart from 1930, even through the years of World War II, and each year millions of people around the world listen to the service live on BBC Radio 4 and the BBC World Service, or watch it on television on BBC 2 and BBC 4.

The format of the service and the order of the lessons have changed little since 1919, and it always opens with the hymn Once in Royal David’s City (see Irish Church Hymnal, No 177) as the processional hymn. This hymn was written by the Irish hymn-writer, Cecil Frances Alexander (1818-1895), whose husband was Bishop of Derry and later Archbishop of Armagh. Traditionally in King’s, the first verse of this hymn is sung unaccompanied by a solo boy chorister.

The Dean of King’s College then begins the service with the traditional bidding prayer:

“Beloved in Christ, be it this Christmas Eve our care and delight to prepare ourselves to hear again the message of the angels: in heart and mind to go even unto Bethlehem and see this thing which is come to pass, and with the Magi adore the Child lying in his Mother’s arms.

“Let us read and mark in Holy Scripture the tale of the loving purposes of God from the first days of our disobedience unto the glorious Redemption brought us by this Holy Child; and let us make this chapel, dedicated to his pure and lowly Mother, glad with our carols of praise:

“But first let us pray for the needs of his whole world; for peace and goodwill over all the earth; for unity and brotherhood within the Church he came to build, within the dominions of our sovereign lady Queen Elizabeth, within this University and City of Cambridge, and in the two royal and religious Foundations of King Henry VI here and at Eton: And let us at this time remember in his name the poor and the helpless, the cold, the hungry and the oppressed; the sick in body and in mind and them that mourn; the lonely and the unloved; the aged and the little children; and all who know not the loving kindness of God.

“Lastly, let us remember before God all those who rejoice with us, but upon another shore and in a greater light, that multitude which no man can number, whose hope was in the Word made flesh, and with whom we for evermore are one. These prayers and praises let us humbly offer up to the throne of heaven, in the words which Christ himself hath taught us: Our Father ...”

The singing is divided into carols sung by the Choir of King’s College and hymns sung by the choir and congregation.

The carols vary from year to year, although some music is repeated. Each year since 1982, the Director of Music at King’s College, Stephen Cleobury, has commissioned a new carol on behalf of the college for the choir. The service ends with Charles Wesley’s hymn, Hark! the herald-angels sing (see Irish Church Hymnal, No 160).

The pattern of readings is:

The demand for seats always exceeds the number available in chapel. Members of the public are admitted to King’s College through the main gate on King’s Parade from 7.30 a.m., but people usually start queueing the night before.

Those who join the queue before 9 a.m. usually get in, although this is not guaranteed. As they queue, they are often entertained by members of Collegium Regale, Choral Scholars of King’s College Choir, singing carols.

More about this service, including the order for this year’s service and for previous years, is available at: http://www.kings.cam.ac.uk/events/chapel-services/nine-lessons.html

The Service of Nine Lessons and Carols in Christ Church Cathedral, Dublin, with the combined cathedral choirs, takes place at 8 p.m. on Monday 20 December 2010. Free tickets are available from the cathedral office (01-877-8099). 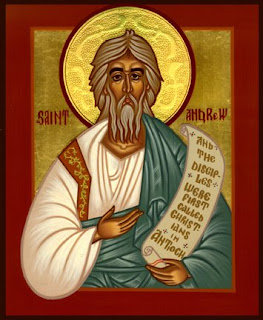 Sunday marked the beginning of the New Church Year. We marked it in Christ Church Cathedral, where we celebrated the First Sunday of Advent at the Cathedral Eucharist and with the Advent Procession.

Although we are using red today, the seasonal liturgical colours have changed from green to violet, we have lit the first candle on the Advent Wreath, and we have turned to the Year A readings in the Lectionary.

But in the midst of change and in the midst of new beginnings, it is important to maintain the link between Saint Andrew and Advent, the beginning of the Church Year. For Saint Andrew is the first-called of the Apostles, the patron saint of mission work. And without mission, there is no church, without discipleship how can people live in the Advent hope, be prepared for the coming of Christ?

In my work with mission agencies, I have constantly been engaged in that question about the link between mission and the Church. Which came first, the chicken or the egg, church or mission?

The Apostle Andrew may not have realised that he was preparing for the coming of Christ, the Advent of Christ. He was a fisherman, working on the Lake of Galilee with his brother Simon Peter. But he was a disciple of John the Baptist, and as we are going to be reminded once again in next Sunday’s Gospel reading, John the Baptist was the forerunner, the one who prepared the way for the coming of Christ.

In hearing the call of Christ to follow him in the Fourth Gospel, Andrew hesitated for a moment, not because he had any doubts about his call, but because he wanted to bring his brother with him. Recognising his duty to bring others to Christ, he went to Peter and told him: “We have found the Messiah … [and] he brought Simon to Jesus” (John 1: 41, 42).

In answering our call to ministry and mission, we must not forget those who are closest to us, those in our families and those who have worked with us.

But, at the same time, like Andrew, we must be happy about leaving behind the nets of yesterday and not getting caught up in them.

Caught up in the minutiae of commercial life and shopping the other day, I once noticed how they were selling cinnamon-flavoured hot cross buns in Marks and Spencer in Dundrum at the beginning of November. Hot cross buns! At this time of the year? Hot cross buns with a sell-by and best-before date of 29 November!

And yet there is a direct connection. In the end, this first Apostle’s life reached its climax when he met his death through crucifixion. He may have left behind no Gospel or Epistles. But Andrew, the first-called of the Apostles, literally took up his cross and followed Jesus. And he called others to do the same.

Christmas is meaningless without looking forward to the Cross and the Resurrection. Mission and Church must always go together. And this morning Saint Andrew, the first-called of the Apostles, reminds us of the meaning of our call to ministry and mission.

And so, may all praise, honour and glory be to God, + Father, Son and Holy Spirit, Amen.

Canon Patrick Comerford is Director of Spiritual Formation, the Church of Ireland Theological Institute. This sermon was preached in the chapel at the Eucharist on Tuesday 30 November 2010.
Posted by Patrick Comerford at 08:35 No comments: