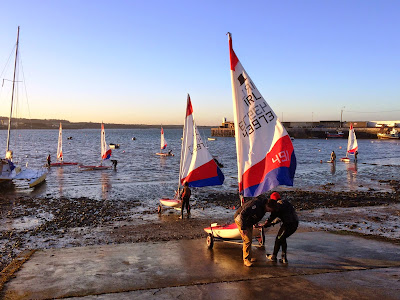 A flurry of sails as the sun was setting at Skerries harbour late this afternoon (Photograph: Patrick Comerford 2014)

I served as subdeacon this morning at the Cathedral Eucharist in Christ Church Cathedral celebrated by the Dean, the Very Revd Dermot Dunne.

Today, in the calendar of the Church, we celebrated the Kingship of Christ or the Feast of Christ the King. To generations of Anglicans, this Sunday has been known as “Stir-up” Sunday, and this is traditionally the day to begin preparing the mixtures for Christmas cakes and Christmas puddings.

This day marks the transition from Ordinary Time in the calendar of the Church to preparing for Advent. As we prepare for the Coming of Christ, especially his Second Coming, today’s readings remind us of the majesty of Christ and his coming in glory.

We certainly had a glimpse of the majesty and glory of God this afternoon, as we strolled along the Harbour in Skerries, and watched a flurry of sails just as the sun was beginning to set.

Unusually, there had been clear blue skies all day, and the setting sun was casting clear lights across the harbour waters and turning the evening skies into a sharp, deep blue that I often associate with Mediterranean sunsets in Greece.

I was filled with wonder as I watched what I imagine was a junior sailing class being brought safely into the harbour and then across the road into Skerries Sailing Club.

Skerries is one of the few coastal places on the east coast of Ireland with a harbour and beaches where you can see both the sunrise and the sunset. 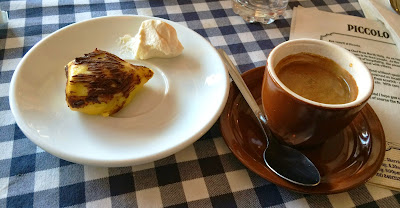 Earlier in the afternoon, two of us had lunch in Piccolo, a new Italian café and bistro which was opened on Thomas Hand Street earlier this year by the chef Giorgio, who is from Treviso.

We finished off with two double espressos and marzipan chestnuts filled with chocolate rum surprise. It gave good reason to return to this little delight. 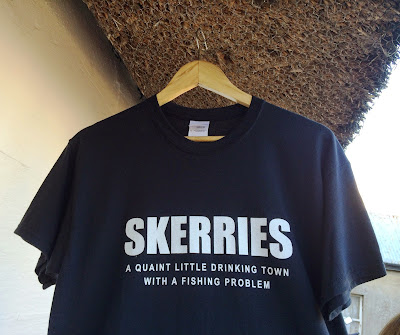 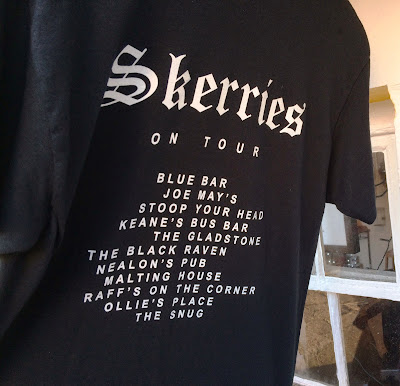 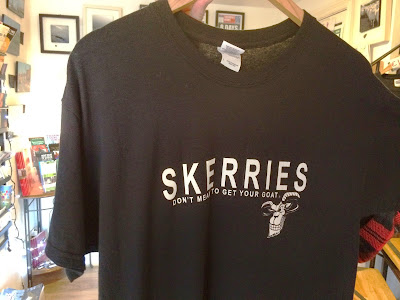 From there, we dropped into the Skerries Tourism and Town Information Office, a new enterprise by Emily Byne Diebold and David Diebold of Skerries News, who have invested years of energy and emotion into this beautiful harbour town.

This new information drop-in centre for Skerries provides information on everything Skerries has to offer, from stories and myths about Saint Patrick, his footsteps and the goats of Skerries, to restaurants, cafés, sand, sea, sunsets, seals and other places to visit.

They also stock an array of locally-made craft gifts, maps and humorously-designed T-shirts and coffee mugs … and the latest editions of Skerries News.

Later we went for that walk around the harbour, and then stepped down onto the South Strand, for a walk on the soft sand. The tide was out, dusk was beginning to close in, but the sky was still a striking, clear blue.

After that we stopped in Gerry’s to buy two bottles of wine, and I was reminded how the buyers here truly know their Italian wines.

Across the street from Gerry’s, we visited the new town gardens at Floraville, close to the Library, Saint Patrick’s Roman Catholic Church, and Olive. This once derelict site has been transformed into a place of tranquillity and peace in the centre of the town, and this afternoon it was crowded with people reading new memorial and gift plaques that have been laid in the last few days. 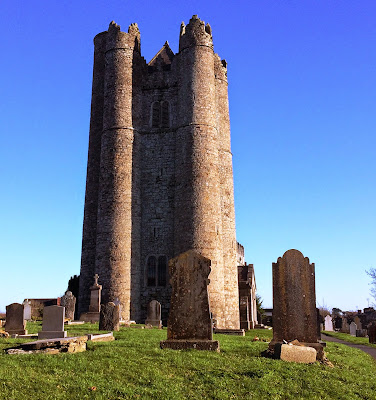 The former Church of Ireland parish church in Lusk towers like a mighty castle above the village (Photograph: Patrick Comerford, 2014)

Earlier, on our way from Christ Church Cathedral to Skerries, I stopped to visit the former Church of Ireland parish church in Lusk, which towers like a mighty fortress above the village, with its ancient round tower and a mediaeval belfry.

The round tower at Lusk is the only surviving building from a monastery said to have been founded about the year 450 by Saint Mac Cuillinn. The site is also associated with Saint Maurus. Saint Maculin is reputed to have either lived or been buried in a cave, which may explain the name Lusk, which is derived from the Gaelic word Lusca meaning a cave or underground chamber. The annals refer to the death in 497 of Saint Mac Cuillinn, who is described as both Abbot and Bishop of Lusk.

The round tower has eight storeys and a basement, which is more than any other round tower in Ireland. The monastery was plundered and destroyed by the Vikings in 827, 835 and burned again in 856, and Lusk was attacked by the neighbouring Irish in 1053, 1089, and 1135. Because Lusk was plundered and burned so many times, the Round Tower is all that survives from the early monastic foundation. 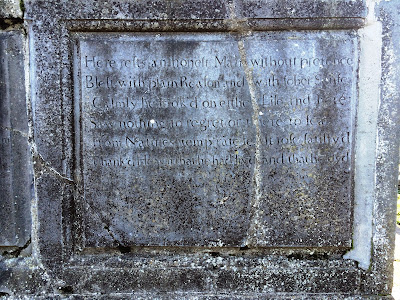 The Echlin tomb, with an epitaph borrowed from Alexander Pope, once stood inside the walls of the older, larger church in Lusk (Photograph: Patrick Comerford, 2014)

You can estimate how large the original monastic and mediaeval church was by standing at the graves in the churchyard of Sir Robert Echlin (1699-1757) of Kenure House, at nearby Rush, and his wife Elizabeth (1704-1782). The Echlins bought their estate from the Butlers of Ormond, and Sir Robert Echlin, who married Elizabeth Bellingham in 1727, settled in Kenure two years later in 1729. Robert died in 1757, and his wife, Elizabeth died in 1782, and their grave was once inside the church but now stands outside in the churchyard.

Elizabeth Echlin, an important 18th-century literary figure in Ireland, was the correspondent of Samuel Richardson and the author of an alternative ending to Richardson’s Clarissa (1757-1748). Her husband’s epitaph, which she composed in 1759, reads:

Here rests an honest Man without pretence,
Blest with plain Reason and with sober Sense,
Calmly he look’d on either Life and here
Saw nothing to regret or there to fear.
From Natures temp’rate feast rose satisfyd
Thank’d Heav’n that he lived, and that he dy’d.

The lines of this epitaph were appropriated by Lady Echlin from two of Alexander Pope’s best epitaphs, the first two lines from that on a Mr Corbett, and the last four from that of a Mr Elijah Fenton.

When the old, ruined church was pulled down in the early 19th century, the smaller church in the Gothic or early English style was built in 1847 against the east wall of the belfry, and the new church was licensed for public worship on 13 October 1847.

However, the church is Lusk finally closed after Divine Service 55 years ago on the last Sunday in December, 1959. The church now houses the Lusk Heritage Centre, and the belfry houses an exhibition on mediaeval churches of North County Dublin. 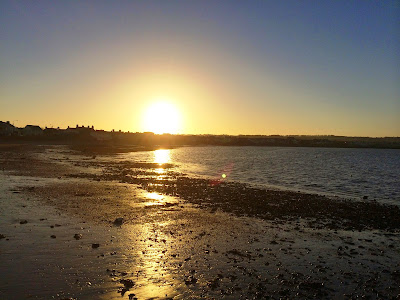 The past few days have been cold and wet, I had to visit my GP on Thursday for another B12 injection, and the wet and cold weather have been aggravating my symptoms of sarcoidosis in my lungs and in my joints.

But under the blue skies of Fingal this afternoon, and as I watched the sunset in Skerries and walked along the beach, I knew this was good for my physical well-being and my spiritual health. This evening, I know that sarcoidosis can never deprive me of the pleasures of life, and that while I may have sarcoidosis, sarcoidosis will never have me. 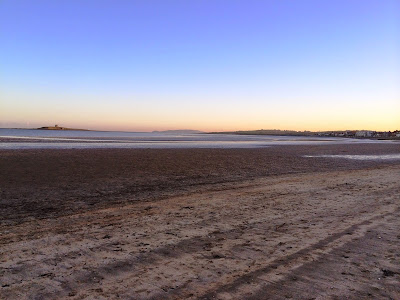 Walking on the beach in Skerries this afternoon (Photograph: Patrick Comerford, 2014)>br />

Posted by Patrick Comerford at 20:21 No comments: