Finding the meaning of
Easter in times of stress 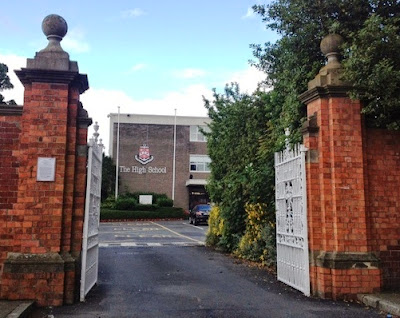 What does Easter mean for you?

If you were honest, for some of you it’s going to be a time for relaxation, and for your first real holiday since Christmas. With the extra promise of sunshine, Easter looks like being a good break for many of you.

But for some of you, Easter may also be a time of anxiety and extra pressures. You have already had many of your oral exams, and now instead of having a break many of you are probably going to use this time for extra study, and pile on your anxieties about the looming exams that many of you fear is going to decide your future.

I am not surprised if for many of you the real meaning of Easter is going to pass you by.

I saw a sign outside the Orchard Inn in Rathfarnham this morning proclaiming boldly that it going to be open all day on Good Friday.

This sort of sign produces two strong reactions among adults that shows even when you have left school, graduated, and found a job, many adults can still behave like teenagers.

The first reaction is from those who rejoice in being able to do something that was once regarded as illicit if not immoral – spending all day in a pub on Good Friday.

The other reaction is from people who encircle their religious beliefs with their symbolic wagons – always a sign of insecurity and immaturity – and bemoan the fact that society is becoming more and more secular.

But even religious people often fail to understand the true significance of Good Friday and Easter. I remember someone a parish some years ago offering me sympathy because I would be “working” throughout a Bank Holiday and have no chance to get away.

Now that Cadbury’s crème eggs can be bought long before Lent begins, the significance of Good Friday and Easter lie not in opening pubs or opening Easter eggs, in whether you have to work hard or get time off.

I spent most of yesterday at a funeral in a border parish in Co Fermanagh. You have all known someone who died. Perhaps a grandparent, a parent, a sibling, an aunt or uncle, even a friend.

And you will wonder, over the next few years, what is the meaning and value of a life after someone has died. You will even come to ask that question of yourself.

Am I worth more than the length of my own life?

Am I worth more than how useful I am to other people?

Am I worth more in life, even if others turn away from me or bully me?

Yes, the answer is always Yes.

And God knows the answer is Yes.

And when God sees you hurt or broken, God knows what it is like to be hurt, broken, dejected, broken inside though no-one else can see that, because God knows what Good Friday is like, and so God loves you even more.

That’s exactly what God does through Jesus Christ on Good Friday – takes on everything that could be possibly wrong in our lives.

But the Good News lies in Easter.

That for me is at the heart of Good Friday and Easter – no matter what, God loves you, and you are worth loving.

Canon Patrick Comerford was speaking at the end-of-term assembly in the High School, Rathgar, Dublin, on Friday 10 April 2014.

Posted by Patrick Comerford at 08:50 No comments:

Art for Lent (38): The Tomb of Nikos
Kazantzakis in Iraklion, Crete 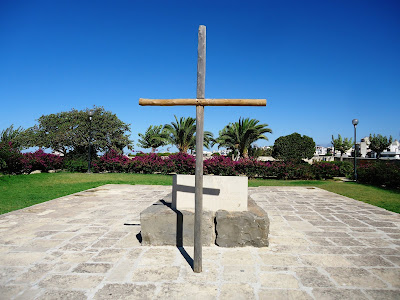 As summer lingered on in Crete last September, I climbed up through the narrow streets of Iraklion one warm sunny afternoon to visit the grave Crete’s most famous writer, Nikos Kazantzakis (1883-1957).

This simple grave, with its plain cross of two unadorned wooden beams and a simple, carved epitaph is a tranquil oasis on the Martinengo Bastion looking across the roof tops the city, pierced by the dome and the baroque towers and turrets of Aghios Minas. Beyond, the blue of the Mediterranean stretches out to meet the blue of the sky on the horizon

The grave is marked by a simple cross and an epitaph carved in his own handwriting, with his own words:

This simple grave, with its cross, epitaph and majestic, sweeping views is so beloved of Greeks that it is a work of art in itself, and visited by countless people who may never have read any books by Kazantzakis, or perhaps only know him through movies such as Zorba the Greek or The Last Temptation of Christ.

An so, with only a week to go to Good Friday, I have chosen this cross and epitaph as my work of Art for Lent this morning [11 April 2014].

The great walls and bastions of Iraklion were part of the Venetian defences of the city they called Candia. Two of the great city gates have survived to this day: the Pantocrator or Panigra Gate, also known now as the Chania Gate (1570), at the western edge; and the Jesus Gate or Kainouryia Gate (about 1587), at the southern edge. Between them, at the south-west corner of these great walls, the grave of Nikos Kazantzakis.

Below the bastion is a monument to Iraklion’s partisans who resisted the Nazi invasion of Crete during World War II. To the south is Mount Iouktas – it looks like the head of a man in profile and so is said to have given rise to the Cretan legend that this was the head of the buried god Zeus.

Throughout his writings, Kazantzakis wrestles with his ideas about God and Humanity, and at different times he spent months in monasteries on Mount Athos and on Mount Sinai in prayer and contemplation.

When The Last Temptation of Christ (1951) was published, the Roman Catholic Church places it on the Index of Prohibited Books. Kazantzakis’ reaction was to send a telegram to the Vatican quoting Tertullian: “Ad tuum, Domine, tribunal appello” (“I lodge my appeal at your tribunal, Lord,” “Στο δικαστήριό σου ασκώ έφεση, ω Kύριε”).

When the Church of Greece condemned Kazantzakis in 1955 and anathematised him, his response was prompt and clear: “You gave me a curse, Holy fathers, I give you a blessing: may your conscience be as clear as mine and may you be as moral and religious as I.” (“Μου δώσατε μια κατάρα, Άγιοι πατέρες, σας δίνω κι εγώ μια ευχή: Σας εύχομαι να ‘ναι η συνείδηση σας τόσο καθαρή, όσο είναι η δική μου και να ‘στε τόσο ηθικοί και θρήσκοι όσο είμαι εγώ.”).

Although Kazantzakis was denied church ceremonies in Athens, when his body was flown to Crete by Aristotle Onassis he lay in state in Aghias Minas Cathedral in Iraklion. His funeral took place on 5 November 1957, and a priest officiated at the burial, giving lie to the popular claim that Kazantzakis had died an excommunicate and was buried without the rites of the Church.

Kazantzakis was nominated three times for the Nobel Prize for Literature. He achieved universal popularity in 1964 with the release of the Michael Cacoyannis film Zorba the Greek, based on the novel. His fame was renewed in a different way in 1988 with the Martin Scorsese adaptation of The Last Temptation of Christ.

After spending six months in a monastery, Kazantzakis published his Spiritual Exercises (Ασκητική) in 1927, which was translated into English and published in 1960 as The Saviours of God.

But he he is best known for his novels, in particular Zorba the Greek (1946, Βίος και Πολιτεία του Αλέξη Ζορμπά). His other books include Christ Recrucified (1948, Ο Χριστός Ξανασταυρώνεται); Freedom and Death (1950, Καπετάν Μιχάλης, Capetan Michalis ); The Last Temptation of Christ (1951, Ο Τελευταίος Πειρασμός); and Saint Francis or God’s Pauper: St Francis of Assisi (1956, Ο Φτωχούλης του Θεού). Report to Greco (1961, Αναφορά στον Γκρέκο), is both autobiographical and fictional.

The figure of Christ is ever-present in his thoughts, from his youth to his final days. He once wrote: “My entire soul is a cry, and all my work the commentary on that cry.”

In The Last Temptation of Christ, he presents a tragic Christ wrestling all his life with the conflicting claims of his divine mission and duty and his human desire to live a normal life, to love and be loved, and to have a family. In this book, Christ summarises his purpose and mission: “I said only one word, brought only one message: ‘Love. Love – nothing else’.”

Writing about this book, Kazantzakis said: “I am certain that every free man who reads this book, so filled as it is with love, will more than ever before, love Christ.”

Some years ago, I wrote about Kazantzakis and his brief love affair with the daughter of an Irish rector, which he recalls in his autobiographical novel Report to Greco. He prefaces this novel with a prayer: “Three kinds of souls, three kinds of prayers: 1, I am a bow in your hands, Lord, draw me lest I rot. 2, Do not overdraw me, Lord, I shall break. 3, Overdraw me, Lord, and who cares if I break!”

In his introduction to Report to Greco, Kazantzakis says “My entire soul is a cry, and all my work the commentary on that cry.”

He goes on to say: “Every man worthy of being called a son of man bears his cross and mounts his Golgotha. Many, indeed most, reach the first or second step, collapse pantingly in the middle of the journey, and do not attain the summit of Golgotha, in other words the summit of their duty: to be crucified, resurrected, and to save their souls. Afraid of crucifixion, they grow fainthearted; they do not know that the cross is the only path to resurrection. There is no other path.”

Later in the book, he writes: “Whoever climbed the Lord’s mountain had to possess clean hands and an innocent heart; otherwise the Summit would kill him. Today the doorway is deserted. Soiled hands and sinful hearts are able to pass by without fear, for the Summit kills no longer.”

Kazantzakis is very clear about his belief in the “mystic law” at work in the world. Although at times he was tempted by nihilism and atheism, Daniel A. Dombrowski points out in Kazantzakis and God (1997), “he makes it clear throughout his works that not want a merely human ‘god.’ Nor does he want a ‘god’ who would be limited by our puny imagination. It is those who turn Kazantzakis’s partial criticism (and partial appropriation) of traditional theism into an agnosticism or atheism who are unfaithful to Kazantzakis’s texts. … neither a pantheistic nor a Buddhist/nihilist interpretation can stand up under the weight of Kazantzakis’s many writings about God.”

His epitaph on his grave on the walls above Iraklion reads: “I hope for nothing. I fear nothing. I am free” (Δεν ελπίζω τίποτα. Δε φοβούμαι τίποτα. Είμαι λέφτερος). In the fuller version, Kazantzakis writes: “I do not hope for anything. I do not fear anything, I have freed myself from both the mind and the heart, I have mounted much higher, I am free” (Δεν ελπίζω τίποτα, δεν φοβούμαι τίποτα, λυτρώθηκα από το νου κι από την καρδιά, ανέβηκα πιο πάνω, είμαι λεύτερος).