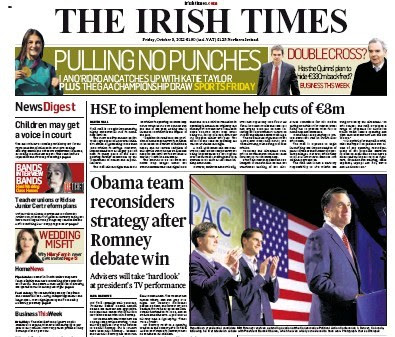 Today’s edition of The Irish Times [5 October 2012] carries the following editorial comment on its leader page:

The newly-elected Church of Ireland Archbishop of Armagh, Dr Richard Clarke, takes up office before Christmas – at the same time as the Church of England expects to have a new Archbishop of Canterbury. The two new primates face similar challenges in their own churches, albeit in different formats, and may need to work closely together as they seek to reconcile what many think are irreconcilables.

Both new Archbishops face churches that have challenging financial problems, open fissures in the debates about clerical sexuality and same-sex marriage, and deep divisions between evangelicals who tend to be conservative on social issues and those who hold more tolerant and understanding values. The two new primates must also address the challenges of secularism and a growing chasm between the stated values of their churches and legislation.

As Archbishop of Armagh, Dr Clarke’s new cross-Border diocese has parishes in both jurisdictions, stretching from Drogheda to the borders of Tyrone and Derry. But while the problems at Drumcree have become less acute in recent years, the Border continues to define many of the divisions in the Church of Ireland today, demonstrated most clearly in the voting at this year’s General Synod on the divisive issues of sexuality. Dr Clarke has a reputation as a liberal, but during those debates in the General Synod he sought to steer a middle ground, perhaps in the hope of holding together a church that was visibly divided and a House of Bishops that allowed its differences to be shown both on the platform and at the synod service in Saint Patrick’s Cathedral.

In the next few months, new bishops are due to be elected in two dioceses, Meath and Kildare, and Kilmore, Elphin and Ardagh. Those elections are likely to have a knock-on effect in other dioceses, so that the House of Bishops may soon have a different balance, perhaps even with the first woman bishop and some evangelical clergy demanding “alternative oversight” from a retired bishop. Maintaining balance and holding together the House of Bishops may be the first difficult task facing the new primate, who chairs their meetings and most of the central committees of the Church of Ireland. He will hope that his experience of local and global ecumenism – from Methodism and Orthodoxy to the Irish Council of Churches, the Community of Sant’Egidio in Rome and Islam in Iran – help him in the tasks ahead.