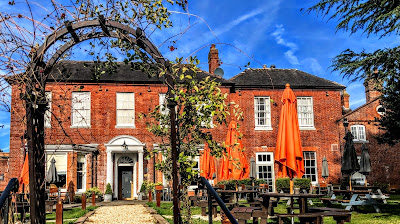 The Hedgehog in Lichfield … time out for reflection and country walks (Photograph: Patrick Comerford, 2021)

I am taking a three-day break in Lichfield, staying in the Hedgehog Vintage Inn at the junction of Stafford Road and Cross in Hand Lane. The pandemic travel restrictions mean I have not been in England since early last year (2020), and I have been missing Lichfield for a long time.

I caught an early-morning Ryanair flight from Dublin to Birmingham, and I was in Lichfield in time for breakfast.

One of the first places I visited this morning was the Chapel of Saint John’s Hospital, which played a foundational role in my spiritual life late on a summer afternoon 50 years ago in 1971.

This is time to reflect on a spiritual journey over the last half century, and to give thanks for the journey that began in the chapel of Saint John’s and in Lichfield Cathedral.

I plan to continue my prayer diary on my blog each morning, and there should be some time for reading and reflection too.

But this is time out too, and I hope to enjoy some meals out, browse in some bookshops and return to some of my favourite buildings after a long absence.

Hopefully, too, I may even bump into some old friends.

The Franciscan Church and Friary on Merchants’ Quay on the south bank of the River Liffey, Dublin, facing the Four Courts (Photograph: Patrick Comerford, 2021)

I am in Dublin Airport, waiting to catch a flight to Birmingham this morning to spend three days in Lichfield.

My photographs this morning (11 October 2021) are from the Church of the Immaculate Conception on Merchants’ Quay, Dublin, better known to Dubliners as ‘Adam and Eve’s’ or simply as ‘Merchants’ Quay.’ 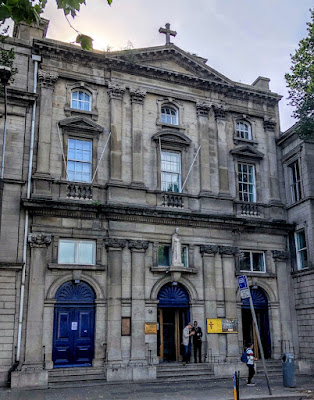 The Merchants’ Quay entrance to the Church of the Immaculate Conception on Merchants’ Quay, Dublin, better known to Dubliners as ‘Adam and Eve’s’ (Photograph: Patrick Comerford, 2021)

Merchants’ Quay is on the south bank of the River Liffey, facing the Four Courts on the north bank.

A new friary was built on Cook Street in 1615, and was Ireland’s first post-Reformation seminary. A chapel on the site was destroyed in 1629, and the friars did not return to the area until 1757, when they bought a house on Merchants’ Quay.

At first, the Franciscans secretly said Mass in the Adam and Eve Tavern, giving the present church its popular name. A newer church was built in 1759, and this was later replaced by the current church.

After Catholic Emancipation in 1829, the friars set about building a new church and laid the foundation stone of the current church in 1834. The church was designed in 1852 by the architect Patrick Byrne, who planned a tower at the Merchants’ Quay entrance. However, because of financial problems, the church was built without a nave or tower.

The church was originally dedicated to Saint Francis, but was rededicated to the Immaculate Conception of Our Lady in 1889.

The church was reorganised after 1900 by moving of the altar to the left wall and the original sanctuary was changed into a transept and an entrance from Cook Street. A small nave was added to the right and a dome built over the sanctuary.

A shrine to Saint Anthony, designed by the architects Doolin, Butler and Donnelly, was built in 1912.

To mark the seventh centenary of Saint Francis in 1926, the friars built a circular apse, remodelled the transepts and extended the nave with an entrance to Skipper’s Alley. This work was designed by JJ O’Hare.

The high altar was consecrated in 1928. The granite bell tower added in 1930 was probably designed by JJ Robinson and RC Keefe, and is crowned by a pedimented temple with columns.

In recent years, the Franciscans of Merchants’ Quay have been closely identified with the work of the Simon Community and addiction and counselling services. 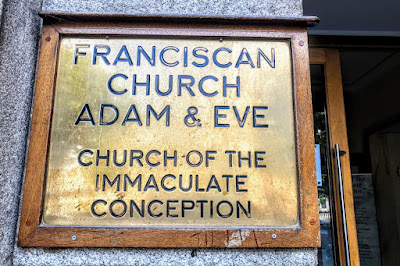 The name of Adam and Eve survives from an 18th century tavern (Photograph: Patrick Comerford, 2021)

1 After this the Lord appointed seventy others and sent them on ahead of him in pairs to every town and place where he himself intended to go. 2 He said to them, ‘The harvest is plentiful, but the labourers are few; therefore ask the Lord of the harvest to send out labourers into his harvest. 3 Go on your way. See, I am sending you out like lambs into the midst of wolves. 4 Carry no purse, no bag, no sandals; and greet no one on the road. 5 Whatever house you enter, first say, “Peace to this house!” 6 And if anyone is there who shares in peace, your peace will rest on that person; but if not, it will return to you. 7 Remain in the same house, eating and drinking whatever they provide, for the labourer deserves to be paid. Do not move about from house to house. 8 Whenever you enter a town and its people welcome you, eat what is set before you; 9 cure the sick who are there, and say to them, “The kingdom of God has come near to you.” 10 But whenever you enter a town and they do not welcome you, go out into its streets and say, 11 “Even the dust of your town that clings to our feet, we wipe off in protest against you. Yet know this: the kingdom of God has come near.” 12 I tell you, on that day it will be more tolerable for Sodom than for that town.’ 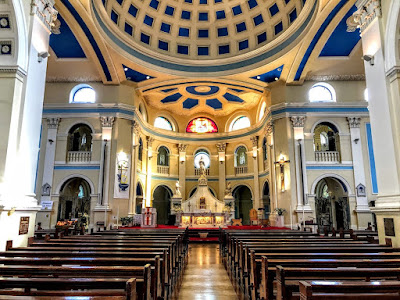 Inside the church, facing the liturgical east (Photograph: Patrick Comerford, 2021)

The Prayer in the USPG Prayer Diary today (11 October 2021, International Day of the Girl Child) invites us to pray:

Today, we pray for girls across the world. May they feel empowered to make their own choices in life. 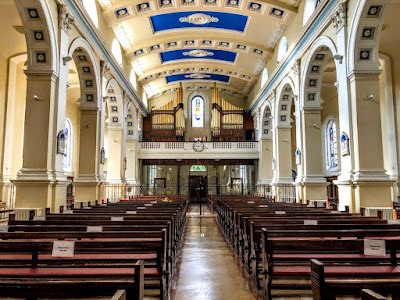 Inside the church, facing the liturgical west (Photograph: Patrick Comerford, 2021)

The dome and the church seen from Cook Street (Photograph: Patrick Comerford)