Elafonísi and the crystal clear waters of the lagoon (Photograph: Patrick Comerford, 2016; click on image for full-screen resolution)

The number of Greek islands I have visited is rising exponentially. Not that I am counting – I lost the list somewhere a few years ago – but after my visits to the Gramvoúsa islands and the lagoon at Balos Bay last week, I visited the island of Elafonísi, at the south-west tip of Crete, yesterday [12 July 2016].

It was an early start from Platanes, outside Réthymnon, at 7.30, and it was a long journey by coach past Chania, before turning south through Kaloudhianá, Voulgáro, and along the side of the Koutsamatádos Gorge, to Élos, one of the nine villages that are known collectively as the Enneachora.

We stopped briefly for breakfast at Kostanofolia, a taverna that takes its name from the local chestnut forests. Behind the taverna, an old arch is said to have been part of an ancient Roman aqueduct, although it may have been built by the Turks. But the real find was the Byzantine Church of Saint John the Theologian (Agios Ioannis Theologos). This tiny church is almost dwarfed by the neighbouring modern parish church of Saint Nikolas of Elos, and hidden in a shaded corner among trees behind the taverna. But the church is decorated with important early 14th century frescoes attributed to Ioannis Pagomenos, a well-known icon writer and painter from western Crete.

We continued on the road above Perivólia, through Kefáli and Váthi, and passed the Monastery of Chryssoskalítíssa (Μονή Χρυσοσκαλιτίσσας), perched on a rock cliff above the sea, before eventually reaching Elafonísi on the south-west tip of Crete. 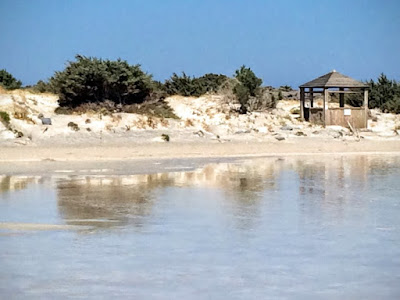 Reflections of Elafonísi in the crystal-clear waters of the lagoon (Photograph: Patrick Comerford, 2016)

Elafonísi (Ελαφονήσι, ‘deer island’), also known as the ‘Pearl of the West,’ is a popular destination for day trippers and the rough car parks were packed tight with hundreds of cars and buses. But no buildings are allowed on the lagoon and the island, which helps to keep the feeling that this is a wilderness away from everything.

The beautiful sandy beaches of Elafonísi and the lagoon are fringed with pink coral sand and the sea and the lagoon have crystal clear waters so that there is a unique feeling of being on a desert island or in a South Seas lagoon while still being in the Mediterranean.

The lagoon is rimmed with sun beds and there is a small number of beach bars supplying drinks and snacks. But we were told the high winds of last week meant there were fewer visitors yesterday than expected.

From the beaches that fringe the lagoon, two of us waded knee-deep across to the island, which is a protected nature reserve and where there are no sun beds or beach bars. The further we walked the quieter the quieter this tiny island became. At the western end there is a promontory with a small lighthouse, and chapel. Out in the distance is the Libyan Sea. 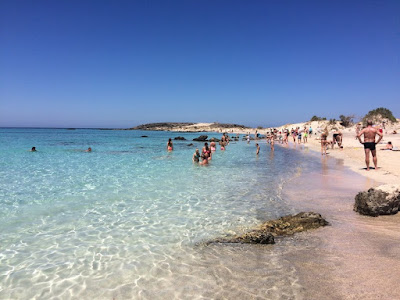 The pink sands and crystal waters of the lagoon (Photograph: Patrick Comerford, 2016)

The pink and red coral sand deposited along the edge of the water is produced by the large amount of red and pink shells that are ground up by the waves and the sea.

Elafonísi is a protected area and a micro reserve. The island is home to 110 plant species including sea daffodils, Marram grass and Juniper trees that have been roped off to stop them being disturbed by visitors. Some paths are marked to discourage people wandering and trampling on the plants.

At the highest point on the island, a plaque commemorates a tragedy on Easter Day, 24 April 1824, when several hundred Greeks, mostly women and children, were killed on Elafonísi by Ottoman soldiers. To avoid advancing Turkish Ottoman troops, 40 armed men took refuge on the island with women, children and older people, where they waited for a ship to take them to the Ionian Islands.

The Ottoman soldiers camped on the beach opposite the island. One of their horses walked along the shallow water to the island and the people hiding there were discovered. In all, 640 to 850 people were seeing refuge on the island; most of them were killed and those who survived were sold into slavery in Egypt.

A large wooden cross commemorates the shipwreck on 22 February 1907 of the Australian passenger steamer the Imperatrix. Due to strong north-west winds, 38 people died in a lifeboat as they tried to reach the shore. They are all buried on the island, and the Imperatrix still lies on the seabed below. Following the shipwreck, a lighthouse was built on an island hilltop, but this was destroyed during World War II by occupying German troops.

In the 1990s, at the height of tensions in the Aegean between Greece and Turkey, Ankara laid claim to a number of Greek islands, the most absurd claims including the islands of Gávdos and Elafonísi off the coast of Crete. 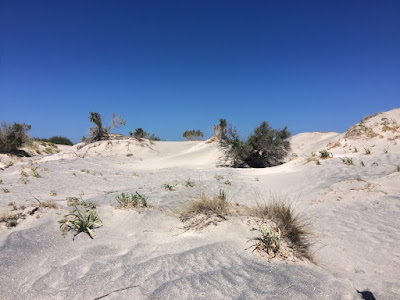 After a few hours on Elafonísi we retraced our route, past the Monastery of Chryssoskalitíssa, which is built on rocks and is 35 metres high, overlooking the Libyan Sea. This monastery once had a community of 200. But like many monasteries in Crete, numbers have dwindled and today there is only one nun and one monk.

The monastery, which dates from the 13th century, is dedicated to the Holy Trinity (Agia Triada) and the Dormition of the Virgin Mary (Koimisis Theotokou). But the popular name comes from a local tradition that one step in a set of 90 appears as a golden step (chryssí skála) to those who are pure of heart.

We never stopped to see whether we could find the golden step. Instead, we broke our journey back at the cave of Aghía Sophía. But instead of climbing the steps to the cave, we had a drink at the Romantza Taverna overlooking the gorge.

It was late in the evening when we got back to Rethymnon from our day on a tropical island. 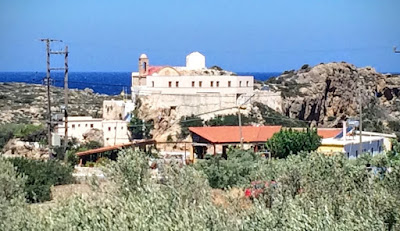 The Monastery of Chryssoskalitíssa, or the golden step, is perched above the Libyan Sea (Photograph: Patrick Comerford, 2016)

Posted by Patrick Comerford at 06:23 No comments: