Two days in Gracehill and Ballymena
in conversations with the Moravians 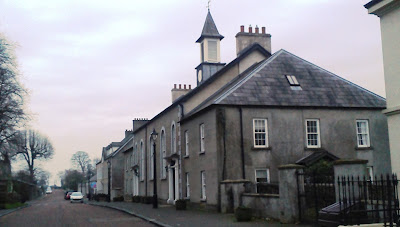 The Moravian Church … at the heart of the village in Gracehill, Co Antrim (Photograph: Patrick Comerford, 2014)

I am visiting Gracehill and Ballymena, Co Antrim, today and tomorrow [30-31 January 2014] as part of the dialogue between the Church of Ireland and the Moravian Church.

These talks began last year in Kilkenny, and I am staying tonight in Tullyglass House Hotel in Ballymena. The hotel is a former country house, dating from the 1890s, and is known as a venue for business meetings, conferences, weddings and dinners.

The Moravian settlement at Gracehill, 3 km outside Ballymena, was founded in 1765. The first group of Moravians arrived in the area ten years earlier in 1746, the church was founded in 1759, and the name of the village reflects their religious convictions.

A plaque on the church wall commemorates John Cennick (1718–1755), the first Moravian evangelist in mid-Antrim, who arrived in Ballymena in 1746, and our meetings today and tomorrow are being held in the Cennick Hall behind the church. 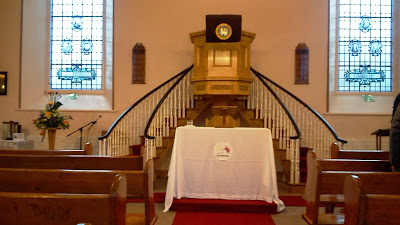 The village retains much of its original and unique Georgian architecture, and Gracehill reflects many of the values of the Moravians, with the village church still the central focal point, facing the square and flanked by the manse and the warden’s house. The Brothers’ Walk and Sisters’ Walk, on either side of the church, meet at the burial ground above, known as “God’s Acre.”

This afternoon we were taken on a walking tour of the village, where life was highly structured in the 18th century, with a community-based way of life. Two and a half centuries ago, the village had its own doctor, there was access to education for all, and many houses had running water.

All the villagers were Moravians, and they were divided into different “choirs” or groups, each with specific duties and houses. We visited the Single Brethren House, pointed to the Single Sisters’ House and the Widows’ House, saw the village shop, hotel and weaving factory, brought into the old school, and we walked around the village green. Later in the evening, we took part in the Holy Communion in the village church. 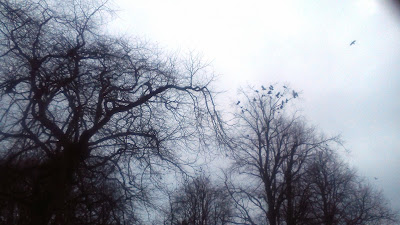 January evening lights in the trees on the Village Square in Gracehill (Photograph: Patrick Comerford, 2014)

As for Ballymena, the history of the town is almost four centuries old and dates back to a grant of land given to the Adair family by King Charles I in 1626. The historic buildings in the town include the Town Hall, built in 1924 on the site of the old Market House.

However, the story of the Ballymena area dates back to Early Christianity. The town is about 10 km from Slemish Mountain, where Saint Patrick is said to have spent six years as a shepherd slave, from the age of 16 to 22. During this time, he turned to frequent prayer in his loneliness. After a vision, he escaped and returned, but after his ordination he returned to Ireland.

Each year on Saint Patrick’s Day (17 March), large crowds hike to the top of Slemish Mountain on a pilgrimage along the one-hour, 1.5 km walk to the summit and back. The 180-metre climb is steep and rocky.

A number of souterrain sites within a 2 km radius of the town centre date to the fifth to seventh centuries, and there are sites of Early Christian settlements nearby. A large stone slab found in the area was carved a cross with the inscription ord do degen, said to refer to Bishop Degen from the seventh century. The stone now stands in the porch of Saint Patrick’s Church, Kilconriola, in Castle Street, Ballymena. 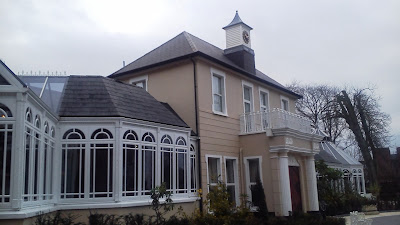 The Tullyglass House Hotel in Ballymena is built around a Victorian country house (Photograph: Patrick Comerford, 2014)

In 1576, Queen Elizabeth I granted lands around Ballymena, to Sir Thomas Smith, but his settlement had failed by 1581, and the lands reverted to the crown. Then in 1607, King James I granted Ballymena to Ruairí Óg MacQuillan.

The Ballymena estate then passed through several owners, and eventually came into the hands of William Adair, a Scottish laird from Kinhilt. Ballymena Castle was built in the early 17th century on the banks of an ancient ford over the River Braid. In 1626, King Charles I confirmed the grant of the Ballymena Estate to William Adair.

During the Williamite Revolution, the Duke of Württemberg, a Williamite general, used Galgorm Castle as his headquarters and Sir Robert Adair raised a Regiment of Foot to fight for William III at the Battle of the Boyne. A century later, during the 1798 Rising, Ballymena was occupied by 10,000 United Irishmen who stormed the Market House.

The Adairs sold of most of their Ballymena estate to their tenants in 1904. Ballymena Castle was abandoned and laid empty for many years and was vandalised thoroughly before it was demolished in 1957. The site is now a car park. Famous local people today include the actor Liam Neeson and the Revd Ian Paisley.

Posted by Patrick Comerford at 00:20 No comments: