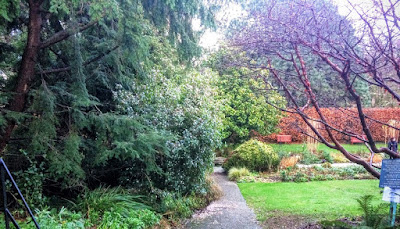 ‘We shall not cease from exploration’ … in the gardens at Mount Usher, Co Wicklow, this afternoon (Photograph: Patrick Comerford, 2015) 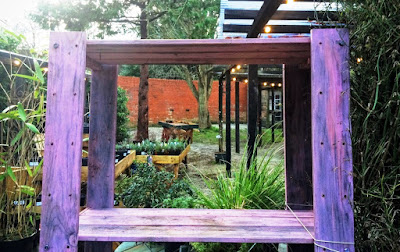 ‘And the end of all our exploring / Will be to arrive where we started’ (Photograph: Patrick Comerford, 2015)

A good place to do this this afternoon was by the river and the waterfall in Mount Usher in Ashford, Co Wicklow, which is the “Garden of Ireland.”

It is only 2 January, but I found myself thinking how this was already my first time outside Dublin this year. Time plays silly games with us as we move between one place and the next, from one year to the next.

I had spent much of this morning working on a paper on James Annesley, the schoolboy from Bunclody, Co Wexford, who was kidnapped 300 years. It is a story of abduction, adultery and assassination that is more captivating than the novel it later inspired, Robert Louis Stevenson’s Kidnapped. Time does little to diminish its shocking impact.

Strolling through the riverside garden by the banks of the River Vartry and at the Garden Café before lunch and through the walled garden with its garden shop later, between the enveloping dusk of the afternoon and the winter darkness of the evening, I had just a tinge of regret that I had not arrived in time to walk by the rivers, waterfalls and tall trees in Mount Usher Gardens.

Three of us had lunch in the Garden Café before returning to the café gardens. Perhaps, had I been more organised, we might have gone further south to see the flooding Slaney Co Wexford, in Bunclody, Enniscorthy and Wexford, for the reports of rising waters and the losses suffered by people in flooded areas are heart-breaking.

But “what might have been … is always present,” as TS Eliot reminds us in ‘Burnt Norton,’ his first poem in the Four Quartets. And I have promised myself more time this year for walks by rivers and the sea, in gardens and in the countryside. 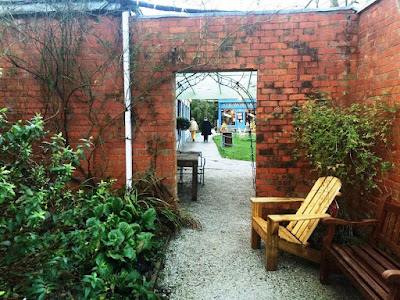 ‘What might have been is an abstraction’ … (Photograph: Patrick Comerford, 2015) 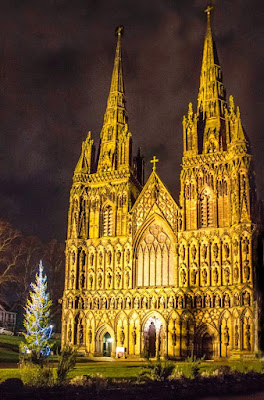 ‘Never since the world began / Such a light such dark did span’ … Lichfield Cathedral at night during this Christmas season (Photograph: John Godley, 2015)

During this Christmas season, I have been inviting you to join me each morning in a series of Christmas meditations as I listen to the Christmas cantata Hodie (‘This Day’) by the great English composer Ralph Vaughan Williams (1872-1958).

In this cantata, Vaughan Williams draws on English Christmas poetry from diverse sources, including poems by John Milton, Thomas Hardy and George Herbert that reflect a variety of Christmas experiences, and the narration of the Nativity story in the Gospels.

This morning [1 January 2016], we come to the end of this cantata, with the two closing movements, a second choral and the Epilogue.

The text of the second choral, again for an unaccompanied chorus, is heart-achingly beautiful and is in two parts. The first verse is from an anonymous poem, while the second verse again was furnished by the composer’s second wife, Ursula Vaughan Williams (1911-2007), who was already established as a poet when they married:

No sad thought his soul affright,
Sleep it is that maketh night;
Let no murmur nor rude wind
To his slumbers prove unkind:
But a quire of angels make
His dreams of heaven, and let him wake
To as many joys as can
In this world befall a man.

Promise fills the sky with light,
Stars and angels dance in flight;
Joy of heaven shall now unbind
Chains of evil from mankind,
Love and joy their power shall break,
And for a new born prince’s sake;
Never since the world began
Such a light such dark did span.

The chorus joins in on the final words, and the remainder of the work is scored for full chorus and orchestra, with soloists. It again sets a fragment of the poem ‘On the Morning of Christ’s Nativity,’ one of the earliest poems by John Milton (1608-1674), written while he was a 21-year-old at Christ’s College, Cambridge:

Ring out, ye crystal spheres,
Once bless our human ears,

If ye have power to touch our senses so;
And let your silver chime

Move in melodious time,
And let the bass of heaven’s deep organ blow;
And with your ninefold harmony
Make up full consort to the angelic symphony.

Such music (as ’tis said)
Before was never made,

But when of old the sons of the morning sung,
While the Creator great
His constellations set,

And the well-balanced world on hinges hung,
And cast the dark foundations deep,
And bid the weltering waves their oozy channel keep.

Yea, truth and justice then
Will down return to men,
Orbed in a rainbow; and, like glories wearing,
Mercy will sit between,
Throned in celestial sheen,
With radiant feet the tissued clouds down steering;
And heaven, as at some festival,
Will open wide the gates of her high palace hall.

Tomorrow: ‘The truth sent from above’.