Dinner in an old church, and a fountain
and love story in the Meath countryside 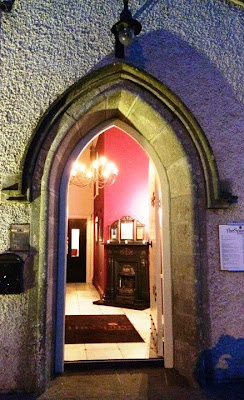 The Spire Restaurant in Duleek is in an old church in the grounds of Saint Mary’s Abbey (Photograph: Patrick Comerford, 2014)

I have been to Duleek a few times this year and last year, so four of us decided to go for an early dinner this evening in the Spire Restaurant in the restored Church of Ireland parish church in grounds of the ruins of Saint Mary's Abbey.

Karen and Aogán Dunne opened the Spire Restaurant on Church Lane on 14 August 2013. But the building is almost 200 years old: Saint Keenan’s Church, designed by the architect John A Trotter (1790-1842), was built in 1816 and consecrated in 1826. The church was closed in 1973 and was derelict for many years until it was converted for us as a restaurant use.

Thomas Trotter inherited the Duleek estates when he married Rebecca Ram. In 1727, he and Abel Ram were elected MPs for the pocket borough of Duleek. Later, Trotter was MP for Old Leighlin until he died in 1745. He was also a Master of Chancery from 1731 to 1742.

A statue of Judge Thomas Trotter once stood in the front porch of Saint Keenan’s Church. It was restored by the Heritage Council and later moved for safe keeping to the Incorporated Law Society in Blackhall Place, Dublin.

His grandson, also Thomas Thomas, was a strong supporter of the Patriot Party in the Irish Parliament, and a close friend of Henry Grattan and Lord Charlemont. He played an active role in the Dungannon Convention and in organising the Volunteer Movement. He is buried in the graveyard of Saint Mary’s Augustinian Abbey beside the Spire Restaurant. 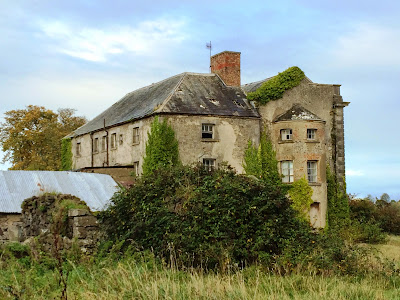 On the other side of Duleek, in the town land of Abbeyland and close to the River Nanny are the crumbling Duleek House and the ruins of the Grange of Saint Michael. The grange was established about 1172 by Augustinian monks from Llanthony Secunda in Monmouthshire, Wales.

Saint Michael’s was a grange or manor farm and acted independently of the Irish civil and religious authorities, giving its allegiance solely to Llanthony Secunda.

Duleek House was designed by Richard Cassels and built around 1750 for Judge Stephen Trotter, who made the house his principal residence. Local lore says some of the window-sills of the house are made of headstones from the graves of the monks of Saint Michael’s House.

This is a detached, three-bay, three-storey over basement country house, attached to an earlier house to the rear, built around 1700. It has a pitched slate roof with a red brick chimneystack to the front block, with a stone balustrade parapet. There are ashlar limestone walls to the front elevation, with a pedimented central breakfront, quoins and a carved cornice. There is a carved stone tripartite Doric doorcase, a Venetian window and a square-headed tripartite window to breakfront. 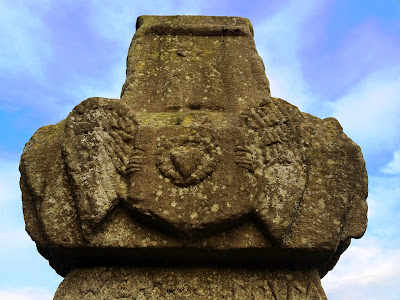 A small heart encircled by a ring on the Dowdall wayside cross in Duleek (Photograph: Patrick Comerford, 2014)

It was sad to see this once-elegant house in such a sad state of disrepair. A more pleasant sight, between Duleek House and the Spire, is a Wayward Cross erected in 1601 by Jane Dowdall in memory of her first husband, William Bathe of Athcarne Castle near Duleek.

The cross, which was repaired in 1810, is one of a series of crosses she erected in Duleek to her husband. Carved on the west side of the projecting band is a small heart encircled by a ring representing conjugal love. 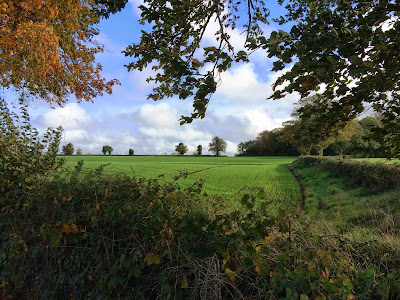 Earlier in the day, I served as subdeacon at the Cathedral Eucharist in Christ Church Cathedral, and attended a reception in the crypt for a second launch of Search, a Church of Ireland Journal.

On the way out to Duleek, the countryside of Co Meath was still in bright autumnal colours under a blue sky with few clouds. Between Balrath and Kentstown, I stopped to admire the views of Somerville House, and the Somerville Fountain on the side of the road. 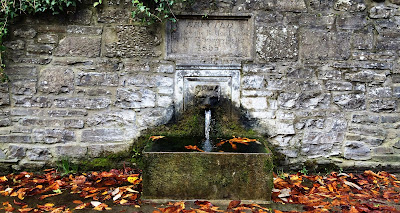 The Somerville fountain on the road between Balrath and Kentstown (Photograph: Patrick Comerford, 2014)

The fountain is set into the demesne wall of what was once the Somerville estate. The water comes from a well a few miles away where, according to legend, Saint Patrick drank while he was on his way from Slane to Tara.

On the way back to Dublin tonight, the countryside of Co Meath was enveloped in darkness, and all seemed to be well … at least in this part of God’s world. 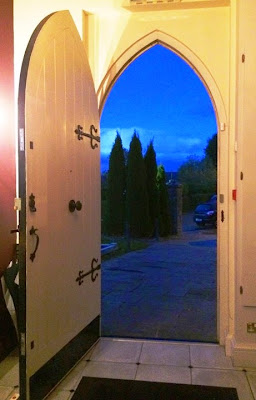 Stepping out into the evening darkness in Duleek (Photograph: Patrick Comerford, 2014)

Posted by Patrick Comerford at 23:16 2 comments: