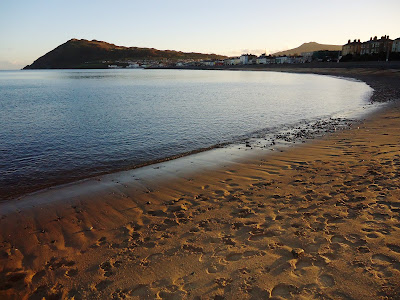 The setting sun seemed to linger a little longer in Bray this afternoon (Photograph: Patrick Comerford, 2012)

I needed to clear some cobwebs from my brain, and despite being told my sarcoidosis is quiescent, I have had a lingering and bothersome sarcoid cough for much of the week. Bray seemed to be a good option for a walk on a beach this afternoon.

The sky above Bray was clear and blue this afternoon. The setting sun seemed to linger for a long time as I walked along the beach and then back along the seafront. It was possible to imagine, even for just for a moment or two, that this afternoon was much warmer that it actually was. 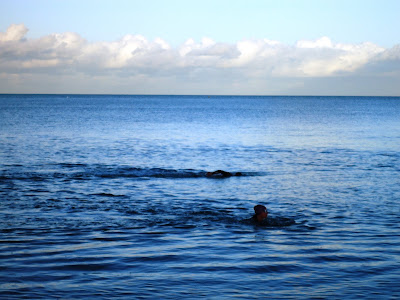 Five brave women swam half the length of the beachfront in Bray this afternoon (Photograph: Patrick Comerford, 2012)

But I was not as brave as the five women who got into the water together for an early winter’s afternoon swim along half the length of the beachfront.

Were they brave? Or were they foolhardy?

One of them cried out that her face was cold. But I shivered at the thought of their venture.

Instead, I warmed up with a comforting and comfortable coffee in Sapori di Campo de Fiori, a tiny but authentic and friendly Italian café-deli on Albert Avenue. 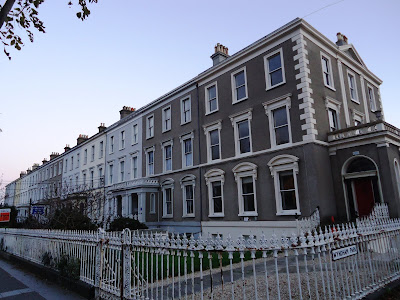 There is a fading elegance about the Victorian terraces of Bray (Photograph: Patrick Comerford, 2012)

Then it was back along the seafront and up Quinnsborough Road to admire the Victorian architecture of Prince of Wales Terrace and to buy the Guardian.

There is a fading, sometimes jaded, elegance about the Victorian terraces of Bray, Co Wicklow. At times, the houses can look tired – sometimes even dilapidated – but they still have the characteristic charm of Victorian seaside resorts.

Quinsborough Road, leading from the Main Street down to the Railway Station and on to the seafront, is one of the most impressive roads in Bray. It has a number of Victorian terraces, including Prince of Wales Terrace. These dozen, terraced mid-Victorian houses were designed as an integrated unit by Lanyon Lynn and Lanyon and built in 1861.

As I headed home, there was a clear blue night sky and a golden crescent moon.

Posted by Patrick Comerford at 21:28 No comments: