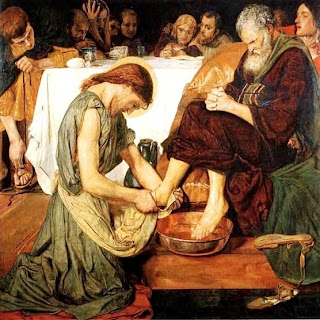 Maybe I am just a little bit of a nerd, maybe.

But sometimes I can find lists interesting. Not that I’m good at learning names, but I find it interesting what lists of names say.

In our New Testament reading this morning, we have the names of the first seven deacons.

We can all – well most of us probably can – list the names of the 12 disciples, perhaps since Sunday school days.

But how many of us can list the names of the seven?

How many of us learned those seven names at Sunday school?

Stephen – the first deacon and martyr.

Prochorus – who, according to tradition, serves John on Patmos as his scribe, writing down in the cave the words of Revelation.

So, diaconal ministry is rooted in witness, in service, in apostolicity – and in listening to the promptings of the Spirit.

Who served at the tables, served as deacons, on the night of the Last Supper?

In this morning’s Gospel passage, surprisingly the word translated into English as servant is not διάκονος (diakonos), but the word δοῦλος (doulos), not servant, but slave (verse 16).

Yes, the word ἀπόστολος (apostolos), apostle, is also used in the same verse (verse 16), for messenger.

Slaves, servants, messengers, foot washers … in our society not very good career options or ambitions for the well-educated and the well-heeled. Called and sent, come and go, fetch and carry, wash up … they all do these things, not by choice, but by compulsion.

It is humbling to remind ourselves every now and then – and especially before we approach this meal – how far we can stray at times from the compelling call to ministry, the call we could not resist; how willing we were to stoop low and kneel, just like Christ – and without making a virtue of it, without making a show and a dance about it.

This was the second of three reflections at the Morning Eucharists at the Porvoo Consultation on Diaconal Ministry in Dublin, 15-18 April 2013.

Posted by Patrick Comerford at 08:15 No comments: