Stopping in Monaghan and recalling
some long roads we have travelled 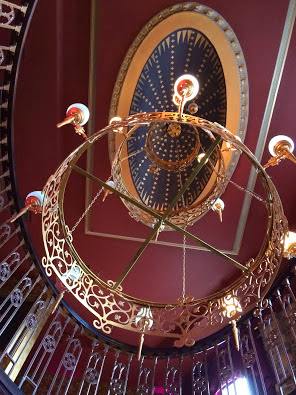 Inside the Westenra Arms Hotel in Monghan this evening (Photograph: Patrick Comerford, 2014)

I spent much of the day travelling to and from a funeral in a small country parish church in the picturesque lakelands of Co Fermanagh, between Roslea and Lisnaskea, close to the border between Co Fermanagh and Co Monaghan.

On the way back to south Dublin, five of us stopped briefly for a late lunch in Monaghan at the Westenra Arms Hotel on the Diamond.

This is an hotel with an interesting history that has served the people of Monaghan for almost 200 years. It has been a silent witness to many social and political events events, and some of the foundations of the older buildings on this site are said to date back to the 17th century.

Thomas Kelly was an innkeeper at the “Westenra Arms” in 1824, when it was probably a coaching inn. In the 1830s, Mr James Curran and his wife Elizabeth were running the hotel. A daughter continued running the hotel, and in the 1860s Miss Emma Curran and sister are listed as leasing the premises from a Mr Mitchell.

The hotel was later bought by Lord Rossmore and rebuilt in the late 19th century. By 1939, Miss Mary F. Bain was the proprietor and manageress of the hotel.

By the end of the 20th century, the hotel’s proprietors were Peter and Anne Driver. Today, the McEnaney family are the proprietors. They undertook major refurbishment work at the hotel in 2003, including the careful restoration of many of the hotel’s original and elegant features.

The Westenra Arms overlooks the Rossmore Memorial in the Diamond in Monaghan’s town centre. The hotel takes its name from a local family, the Westenra family, who are of Dutch descent, and came to Ireland in the 17th century. They lived nearby at Rossmore Park and held the title of Baron Rossmore,

The title was given to General Robert Cuninghame, Commander-in-Chief of Ireland, in 1796, with remainder to the nephews of his wife Elizabeth, Henry Alexander Jones, Warner William Westenra and Henry Westenra.

When the general died the title passed to his nephew Warner William Westenra, was an MP for Monaghan. His eldest son, the third baron, also sat as a Whig MP for Monaghan before succeeding to the family title.

The Rossmore Memorial in the Diamond was erected in 1876 as a memorial to the 4th Lord Rossmore, who died after a hunting accident at Windsor Castle on 28 March 1874. This Victorian monument was described by architectural historian CEB Brett as “formidable and striking.” It is octagonal in shape, with central marble columns supporting a fountain. Around it, the eight grey columns support the pinnacled superstructure that rises to a dome. The dome is surmounted by a spire supported by yet more columns. The letters of Rossmore (also 8 in number) are spaced out around the monument.

Rossmore Park was abandoned in the 1940s, fell into ruins, and was demolished in 1975.

Nearby, in front of the courthouse, stands a monument in memory of the victims of the 1974 Monagahan bombings. It was unveiled by President Mary McAleese on 17 May 2004, on the 30th anniversary of the bombing. The sandstone and metal column contains seven light wells bearing the names of each of the seven victims of the bombing.

I wonder did anyone at today’s reception in Windsor Castle recall that Lord Rossmore had died there 140 years ago.

On the other hand, some of the graves in that small country churchyard in Co Fermanagh and the monument outside Monaghan Courthouse are reminders of the difficult road we have all travelled in the past 40 years that made possible today’s reception for President Michael D Higgins in Windsor Castle, and the attendance of Peter Robinson and Martin McGuinness.

The road from Monaghan back to Dublin seemed a little shorter this evening.

For the third consecutive year, Southwark Cathedral is marking the season of Lent by exhibiting thought-provoking large-scale works of art. My choice of a work of Art for Lent this morning [10 April 2014] is one of those exhibits, ’40 Days’ by Angela Wright.

This work consists of a large wool installation relating to the high-altar and screen. It partners ‘another hour,’ an installation by Edmund de Waal in the retrochoir at the back of the altar screen. Both artists live and work within the Diocese of Southwark.

The installations are part of an emerging new tradition at the cathedral: two years ago, Southwark Cathedral hosted David Mach’s ‘Die Harder’ piece; and the Lenten installation last year (2013) was ‘Christ Rests in Peace’ by Nic Fiddian-Green.

Angela Wright’s piece, ‘40 days,’ is made from spun wool. It is suspended below the East Window of Southwark Cathedral, a drop of some 50 ft, covering the altar screen.

Angela Wright has worked as an artist in wool for several years and her installations have travelled the world in celebration of the Campaign for Wool. In this installation, she combines the two hanks of wool given by Martin Curtis: the original hank used in the first wool installation in “Wallspace” (2009) and the ‘40 countries’ wool hank used in exhibitions in London, Sydney, Shanghai and Seoul.

Her present exhibition in Southwark Cathedral is made from wool grown in 40 different countries and processed at the Haworth Scouring Company in Bradford under the constant supervision of the environmental consultants, ENco.

The 40 countries where the wool originated from include Britain, Australia, New Zealand, South Africa, and the US. There is also Viking Wool from Norway and Real Shetland Wool from the Shetland Islands.

The wool grown by different sheep breeds in different countries is totally different. They range from the super fine merino types that make wonderful fashion clothing to the Scottish Blackface wool that goes into some of the very best carpets. In between, there are hundreds of different wool types and grades and blending them together can be an extremely difficult task.

She says she hopes that “visitors will look up at its mass and the spillage of its myriad wavy strands tumbling down to the stone floor, its colour, smell and softness will engage with the senses.”

Edmund de Waal’s piece, ‘another hour,’ consists of 12 free-standing vitrines, each nearly 7 ft high and holding a single white porcelain vessel. They stand in a serpentine line in the retrochoir at the east end of the cathedral. He describes his work as an “… attempt to make you pause, to stand still and listen in this vast building, to contemplate the changing light and shadow of the space and to reflect on a thousand years of liturgy.”

Edmund de Waal is Professor of Ceramics at University of Westminster. He was born in 1964, and studied English at Cambridge University and ceramics in both England and Japan. He is best-known for large scale installations that have been exhibited in museums around the world. Much of his recent work has been concerned with ideas of collecting and collections; how objects are kept together, lost, stolen or dispersed. His work comes out of a dialogue between minimalism, architecture and music, and is informed by his passion for literature.

He is also known as a writer, and his recent book, The Hare with Amber Eyes, which traces his family history, has been an international bestseller and won many literary prizes.

The Dean of Southwark, the Very Revd Andrew Nunn, says: “We are delighted that we will have two art works – ‘another hour’ and ‘40 days’ – to accompany our journey from Lent to Holy Week and Easter.”

“These events in the life of Jesus are lived almost in real time by the Christian community and especially in the final week before Easter,” Dean Nunn says. “The encounter with the Living God is both in time and eternity and both of these works will help us to enter more deeply into this mystery and reality.”

Tomorrow: The Tomb of Nikos Kazantzakis in Iraklion, Crete.