‘Nuclear Disarmament – the moral imperative of our age’

It is a real pleasure to have been re-elected President of the Irish Campaign for Nuclear Disarmament, although it is an honour that I would prefer there was no need for, and this is a campaign that I hope – like the Irish Anti-Apartheid Movement – can work its way out of existence.

It is my hope that the world can still realise the goal of nuclear disarmament. Otherwise, the consequence may be that the whole of humanity has worked it’s way out of existence.

Before Oslo 2013 opened in March, the International Campaign to Abolish Nuclear Weapons (ICAN) hosted a Civil Society Forum to draw attention to the humanitarian impact of the use of nuclear weapons to encourage all states to begin work on outlawing nuclear weapons. Representatives of the Irish Campaign for Nuclear Disarmament (Irish CND) were among the participants from over 70 countries at that forum.

Several UN agencies – including OCHA, UNDP and UNHCR – as well as the international Red Cross and Red Crescent movement, and ICAN, presented their findings on the environmental, developmental, and health consequences of nuclear detonations. They concluded that no international response plan could effectively be put in place to respond to such an event. Any attempts to respond would be futile; prevention is the only option.

Dr Rebecca Johnson, Co-Chair of ICAN, said the conference showed “that any use of nuclear armaments would cause mass suffering,” with calculations of climate disruption and famine in non-nuclear as well as nuclear-armed countries. “This global impact makes it the responsibility – and right – of everyone to take action to stop this from happening,” she said.

Some governments have hailed Oslo 2013 – which saw the participation of 127 governments, UN agencies, international organisations, and civil society – as a success. But an opportunity for dialogue has been missed, and once again we are left waiting for the results of a follow-up meeting to be hosted by Mexico.

Two years ago, the Red Cross/Red Crescent movement adopted a resolution, which “finds it difficult to envisage how any use of nuclear weapons could be compatible with the rules of international humanitarian law, in particular the rules of distinction, precaution and proportionality,” and that urges states to abolish nuclear weapons.

At Oslo this year, many states expressed their recognition of a shared responsibility to act to prevent any accidental or intentional use of these weapons of mass suffering.

The announcement by Mexico to build on the Norwegian initiative by hosting a further meeting provides a new platform from which to consolidate the humanitarian arguments and to engage all states in a constructive dialogue to outlaw and eliminate nuclear weapons.

But we have to concede that Oslo marks a new beginning towards the elimination of nuclear weapons. This is the first time states have come together to consider the humanitarian effects of nuclear weapons, to confront the horror of these weapons and to realise that far from being powerless to do anything about it, they can and must take responsibility for putting in place an international ban that is long overdue.

The countries that have renounced nuclear weapons and concluded regional Nuclear Weapons Free Zones, such as Africa and Latin America, are providing important moral leadership to carry forward international efforts to free the world of nuclear weapons and to prevent the global disaster that their use would create.

The Nobel Peace Laureate, Archbishop Desmond Tutu, argued recently that we cannot intimidate others into behaving well when we ourselves are misbehaving. Yet, he says, this is precisely what the nuclear powers are trying to do by censuring North Korea for its nuclear tests and sounding alarm bells over Iran’s pursuit of enriched uranium. “According to their logic,” he says, “a select few nations can ensure the security of all by having the capacity to destroy all.

And he goes on: “Until we overcome this double standard – until we accept that nuclear weapons are abhorrent and a grave danger no matter who possesses them, that threatening a city with radioactive incineration is intolerable no matter the nationality or religion of its inhabitants – we are unlikely to make meaningful progress in halting the spread of these monstrous devices, let alone banishing them from national arsenals.”

Already, 184 nations have given a legal undertaking never to obtain nuclear weapons, and three in four support a universal ban. South Africa has already voluntarily dismantled its nuclear stockpile, and Kazakhstan, Belarus and Ukraine have relinquished their Soviet-era nuclear arsenals.

Yet nine nations still consider it their prerogative to possess these ghastly weapons, each capable of obliterating many thousands of innocent civilians, including children, in a flash. The US and Russia retain thousands of their nuclear warheads on high alert; Britain, France and China are squandering billions on updating their nuclear forces; Israel demands that Iran should not to acquire the bomb, it treasures its own nuclear arsenal.

The nuclear powers appear to think that nuclear weapons afford them prestige in the international arena. But each and every one of nuclear-armed state must be condemned for possessing these indiscriminate, immoral weapons.

But none of this has happened. The NPT was extended indefinitely shortly before it was to expire in 1995, and 18 years later there are an estimated 19,000 nuclear weapons in the world.

This hypocrisy among the nuclear powers has stymied multilateral disarmament discussions for decades. The nuclear powers must apply the same standard to themselves as to others – zero nuclear weapons. Otherwise, the consequence of deferring nuclear disarmament indefinitely, pending the satisfaction of an endlessly growing list of preconditions, can lead only to a world full of nuclear weapons.

The international community has imposed blanket bans on other weapons with horrendous effects – from biological and chemical agents to landmines and cluster munitions. So, why we have failed time and again to do the same for the very worst weapons of all?

For too long, debates about nuclear arms have been divorced from the realities highlighted by the humanitarian agencies at Oslo, focusing instead on geopolitics and narrow concepts of national security.

For several decades, the Conference on Disarmament has played a central role in promoting the rule of law in disarmament. Its achievements include the Biological and Toxin Weapons Convention; the Chemical Weapons Convention; and the Comprehensive Nuclear Test-Ban Treaty.

But despite this, it is clear that the Conference on Disarmament has been dysfunctional since the conclusion of negotiations on the Comprehensive Nuclear Test Ban Treaty in 1996. What was designed to be the sole multilateral disarmament negotiating body has been unable to perform its role for the best part of two decades.

Hopefully, this initiative will be an opportunity to inject new life into the Conference on Disarmament, which must be placed back at the heart of global disarmament negotiations.

Speaking at the Conference on Disarmament in Geneva earlier this year, the Tánaiste and Minister for Foreign Affairs, Mr Eamon Gilmore, strongly re-affirmed Ireland’s commitment to nuclear disarmament. But he warned too of the risk of the Nuclear Non-Proliferation Treaty (NPT) unravelling if progress is not made on disarmament from states possessing nuclear weapons.

As Minister Gilmore said in Geneva, “any use, whether accidental or deliberate, of nuclear weapons” would have “calamitous, unmanageable and immoral implications … The longer term effects – to health, the environment, agriculture, commerce – to human life as we know it – are unimaginable.”

Canon Patrick Comerford is President, the Irish Campaign for Nuclear Disarmament. He was speaking at the Annual General Meeting of Irish CND at 7.30 p.m. on Monday 13 May 2013 in the Mansion House, Dublin.

Email ThisBlogThis!Share to TwitterShare to FacebookShare to Pinterest
Labels: CND, War and peace

‘An erudite and impressive blog ... An engaging page’ 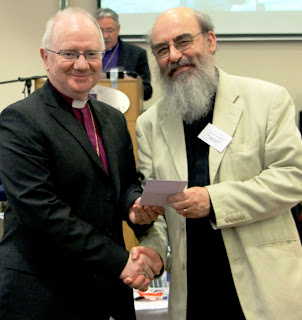 Receiving one of two prizes in the Communications Competition from the Archbishop of Armagh, Dr Richard Clarke, at this year’s General Synod (Photograph: Lynn Glanville, 2013)

This blog and my Facebook page both received prizes in the Church Of Ireland Communications Competition at the General Synod in Armagh this year [2013]. The prizes were announced by Bishop Trevor Williams of Limerick and Killaloe, and presented by Archbishop Richard Clarke of Armagh.

The competition was organised by the Church of Ireland Press Office but was judged externally by media professionals working in the field of church communications. In the areas of blogs and social media, the competition was looking to see how churches, church organisations and members engaged with the huge developments in social networking, and the organisers said “communications activity continues to increase markedly in these areas.”

In the “Blogs” Category, this blog was “Highly Commended.” The judges described this Blog in these words: “An erudite and impressive blog, both in terms of the scope and the frequency of posts. Lots of thought has gone into this blog and its shows. Extremely detailed. Excellent use of photos. Easy-to-use archives and search engine. Well done.”

First Place went to the Revd Chris Bennett Down and Dromore for his blog, http://www.the-dock-org The judges said: “A wonderful, innovative example of how social media can be used in a church context. An attractive, thought–provoking and enticing blog. Fantastic use of video and images. User–friendly and welcoming. Keep going!”

The Runner Up was the Revd Stanley Monkhouse for his blog: http://ramblingrector.wordpress.com The judges said: “An engaging and compelling blog voice on theology and everyday life. Cultivates readership. Good use of photos. Consistency in form and style. User–friendly archiving. Great job!”

In the “Social Media” Category, my Facebook page was Runner–Up. The judges said of my Facebook page: “An engaging page. Patrick Comerford’s outreach on social media is admirable. He shares his theological and cultural knowledge in a way that is accessible to others, and this is reflected by his social media following.”

First Place went to Facebook Page of Saint Patrick’s Cathedral, Dublin. The judges described it: “A fantastic Facebook page. Informative: not only of Cathedral’s events but also of Cathedral’s history. Outstanding photography. The strength of this page is also reflected in the number of ‘Likes’ it has received so far.”

The Twitter Stream of Saint Werburgh’s Church, Dublin, was “Highly commended.” The judges said: “An excellent example of how to use Twitter. St Werburgh’s Church Twitter stream shows a high level of engagement with others (through retweets; tweets to others and the number of people the church follows) as well as informing others of the church’s events, offering reflections and engaging with current affairs. A good number of followers too.”

In his Presidential address at the General Synod on Thursday [9 May 2013], Archbishop Richard Clarke said: “Much of the actual delivering of the Gospel is effected at what we tend to call ‘local level’, in the work, worship and witness of local communities – clergy and people collaborating and working together – this is very true of church communications work too and the competition demonstrates how entrants put enormous effort into communicating effectively within their own contexts.”

The judges praised the submissions in each category, with clear evidence of communication work of a very high standard reaching right across the island.