A bank holiday at Brittas Bay 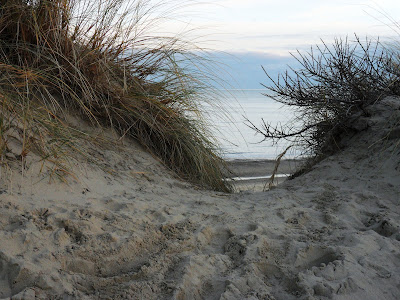 A glimpse of the sea through the sand dunes at Brittas Bay (Photograph: Patrick Comerford, 2011)

Today is a bank holiday in the Republic of Ireland, to compensate for the fact that New Year’s Day fell on a Saturday this year.

The day off has stretched out the weekend and the holiday season. But it was a bright, sunny day, despite the near-freezing temperature, and so I headed off this afternoon for another beach walk, this time to Brittas Bay, which is one of the finest beaches on the East Coast of Ireland.

Brittas Bay lies south of Wicklow Town, close to Arklow, but on a day like today, with little traffic, is only a 45-minute journey from where I live in south Co Dublin.

On summer days, this is one of the most popular beaches near Dublin for day-trippers. It must have featured in countless school essays in Irish, each entitled “Cois Farraige,” and each with the opening words: “Lá brea samhraidh a bhí ann. Bhí an grian ag tainbh ...”

Brittas Bay stretches for 5km of almost-uninterrupted white sand dunes and clean beaches, and for many consecutive years the beach has been awarded the EU Blue Flag –international recognition given only to the highest quality beaches in Europe. Brittas Bay has also received Silver Starfish Awards because of its outstanding water quality. 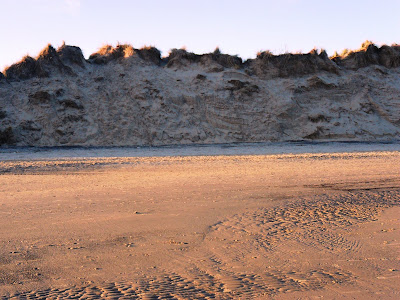 The powdery sand and sand dune system at Brittas Bay is a designated Area of Scientific Interest (Photograph; Patrick Comerford, 2011)

The powdery sand and sand dune system is designated an Area of Scientific Interest (ASI) and is of significant ecological interest, with the dunes, which dominate the landscape, hosting a wide range of wildlife species and plants, many of them rare and unique.

The name Brittas is comes from the Old French bretesche, meaning “brattice, boarding or planking,” and refers to wooden defences associated with a motte or castle-mound of the Anglo-Norman period. Today, wooden boardwalks from the car parks to the beach are intended to protect the sand dunes and the wildlife and plants they are home to.

The dunes, which cover about 100 hectares, have been built up over countless years and are still evolving. Some parts suffer wind erosion, and others, especially where vegetation has been established, are fairly stable. In other places, new dunes are being formed. Behind the dunes is an area of fixed dunes, and beyond this area there is a marsh to the northern end.

On the most recent dunes, nearest the sea, the dominant plant is Marram Grass, which grows vigorously in mobile sand and binds the dunes with its underground stems and roots, which are up to five metres long. New dunes are forming in this way at the southern end of Brittas Bay.

The remainder of the dunes are relatively stable and common wild flowers there include Birds Foot Trefosil and Seaside Pansy, which carpet the area in a blaze of colour. They have the ability to fix nitrogen into the sand and so can grow in very poor soils.

At the back of the dunes, nearest the road, the vegetation is dominated by Bracken, Burnet Rose and patches of Gorse, which provide nest sites for birds such as Linnets. A few areas of heather survive indicating the acidic nature of the older dunes. Many exotic species such as New Zealand Flax and Sea Buckthorn, which were originally planted in gardens, have escaped into the older dunes near the road.

The sand dunes at Brittas Bay are home too to a number of plants that are rare in Ireland, including Wild Asparagus, Green-flowered Helleborine and Meadow Saxifrage. Animals living in the dunes include rabbits, foxes and hares. Common seabirds such as Herring Gull, Great Black-Backed Gull, Black-headed Gull and Cormorants are abundant along the shore.

We walked north first, towards Mizen Head enjoying the clear blue skies and the gentle roll of the waters lapping against the shore. Turning back south, the beams of the setting sun were sparkling off some of the small pools that had formed in the sand, and there were purple and pink hues in the sky. 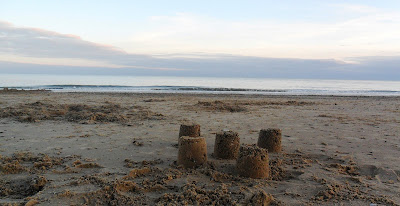 Sand castles on the shoreline at Brittas Bay this afternoon (Photograph: Patrick Comerford, 2011)

Dusk had not yet taken a grip on the evening, and we took the coast road back from Brittas Bay, driving through Three Mile Water, an area linked with the stories of Saint Patrick and Saint Kevin, to Wicklow Town.

On the edges of Wicklow town, we stopped briefly to climb the steep path down through Wicklow Golf Course, to a pebbly cove where a babbling stream was emptying its water into the sea. This club, founded in 1904, took an advanced stand from the very beginning, admitting women as full members from its foundation

We stopped again in Wicklow town, to pick up the papers in Earl’s and for an espresso and an Americano in the Coffee Shop on the corner of Fitzwilliam Square, looking out on the obelisk commemorating Captain Robert Halpin, a pioneer in laying telegraph cables on the seabed and a native of Wicklow Town.

By now, dark had fallen. There was no point in heading off to another beach. I was home before 6.

It was another perfect day in this New Year, and once again those beach walks made me feel positive about living with sarcoidosis.
Posted by Patrick Comerford at 19:05 1 comment:

Ten lords-a-leaping on the Tenth Day of Christmas 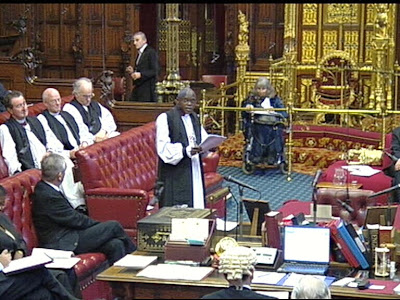 Bishops leaping to their feet to speak in the House of Lord. On the Tenth Day of Christmas ... ten lords-a-leaping

The Tenth Day of Christmas is 3 January. In modern Roman Catholic usage, today celebrates the Holy Name of Jesus, which is marked in most other traditions, including the Anglican and Lutheran traditions, on 1 January.

Saint Seraphim of Sarov was also recalled in the calendar of the Church of England yesterday. He is one of the best-known mystics and monks in the Russian Orthodox Church, and died on 2 January (OS) 1833. Seraphim’s best-loved quotation is: “Acquire a peaceful spirit, and thousands around you will be saved.”

The tenth verse of the traditional song, The Twelve Days of Christmas, is:

The Christian interpretation of this song often sees the ten lords-a-leaping as figurative representations of the Ten Commandments (Exodus 20: 1-17).