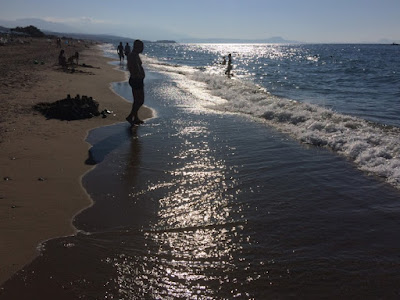 Bright sunshine sparkles on the water and the sands at Pavlos Beach (Photograph: Patrick Comerford, 2016)

I have had my first swim in the Mediterranean this year.

Although I was in Barcelona for Easter, and walked along the miles of beach close to the city centre that weekend, it was too cold in March to think then of swimming.

I spent most of Thursday afternoon [30 June 2016] on Pavlos Beach, just 300 metres from Julia Apartments, where I am staying, about 5 or 6 km east of Rethymnon on the north coast of Crete.

The temperatures were in the mid-30s for most of the day, there were blue skies, and the sea was sparkling under the bright sunshine. Further west, I could the Venetian-built Fortezza in Rethymnon in clear relief, and behind me were the mountains of Crete.

This is still early in the holiday season in Crete because English families have yet to arrive once schools have closed. But there was a variety of European accents and languages around me in the water and later on the beach as I sat on a sunbed in the afternoon sunshine reading Bill Bryson’s The Road to Little Dribbling, More Notes from a Small Island..

It was good to be distracted from the political manoeuvres going on in Britain this week in the wake of last week’s referendum and Brexit vote.

But it is interesting how even a humorous book like this, with so many stings in so many tails, can bring me back to the machinations of politicians.

At one point as I read in the afternoon, he was describing a train journey from London to Birmingham, and how much money is being spent on HS2.

Earlier in June, as I walked by the River Tame and the railway line in Comberford, or sat waiting for trains in the stations at Lichfield Trent Valley and Tamworth, I really wondered what benefit HS2 was going to bring to the people and families, the towns and farms of that pretty corner of south Staffordshire.

Bill Bryson points to some of the better attractions in Birmingham, including some of the finds from the Staffordshire Hoard, unearthed near Lichfield in 2009. But he looks at the spending cuts forced on Birmingham City Council, and asks how people are to spend the £1.40 saved for each person by those spending cuts. On faster trains?

I am left wondering why no-one went around on a big bus during the referendum campaign suggesting cancelling HS2 so Britain could both pay its way in the EU and properly fund the NHS.

A few pages earlier, he gives a kind description of the archaeological work of Sir Arthur Evans in Knossos in the early part of the 20th century, and the efforts to decipher Linear A and Linear B.

It seems ironic that in the decades immediately before World War II, Britain was closer to European Civilisation than Michael Gove, Boris Johnson or Nigel Farage would like it to be today.

Perhaps I need to spend a little more time by the beach in Crete. Or, perhaps, I need to get back to Knossos sometime in the coming weeks. 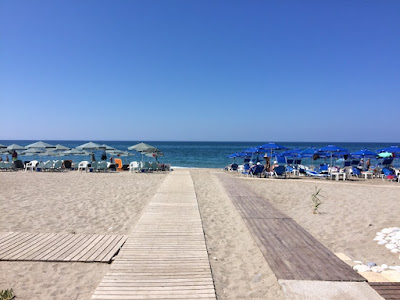