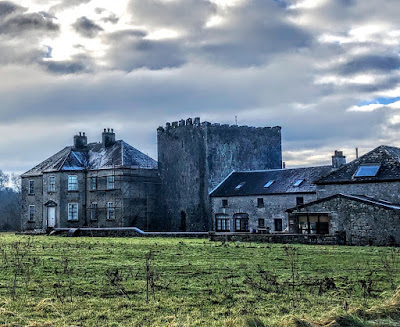 Castle Hewson, east of Askeaton, Co Limerick, stands in the townland of Ballyengland. The 18th century house is on a low crag is undergoing restoration, and I visited the house earlier this week for the first time since moving to Askeaton four years ago.

Castle Hewson stands beside an earlier tower house or castle that gives the house its name. It was also known as Ballyengland House, and the England family were originally tenants of the Earls of Desmond. After the Desmond rebellion at the end of the 16th century, Thomas England was pardoned in 1581 and 1590, when his son attainted and hanged.

The Hewson family was living at Castle Hewson from the end of the 17th century. They continued to live there into the late 20th century, with other branches of the family living at Enniscouch and Hollywood.

By the mid-19th century, the main part of the Hewson family estate was in the parish of Askeaton, but the family also owned other houses and lands in the area: in the 1870s, John Brownrigg Hewson owned Castle Hewson and 1,435 acres; George James Hewson of Hollywood owned 666 acres; and Robert Hewson of Ennishcoush owned 398 acres near Rathkeale, Co Limerick. Other family members owned lands at Castleisland, and Ennismore, near Listowel, Co Kerry. 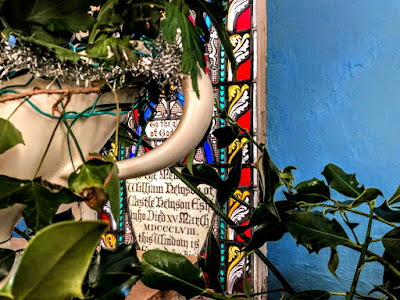 The East Window in Saint Mary’s Church, Askeaton, was donated by the Hewson family of Castle Hewson (Photograph: Patrick Comerford, 2021)

Castle Hewson retains much of its original form and fabric, including a variety of tripartite and timber sliding sash windows. A number of decorative features – including the red brick voussoirs, cast-iron ridge crestings, and limestone finials – add an interesting contrast to the rubble stone and rendered walls. The adjoining tower house adds archaeological significance to the site and is preserved in a relatively good condition. The outbuildings and walled garden behind the house add context to the site.

The first-floor windows have double-leaf timber louvered shutters. The square-headed opening at the front of the house has a carved limestone doorcase with a limestone pediment supported by pilasters, and a flanking double-leaf timber panelled door. It is approached by cut limestone steps.

The walled garden behind the house has a square-profile, three-stage tower at the north-east corner. There is an eight-bay, two-storey outbuilding beside the north elevation of the tower house, and a four-bay, split-level outbuilding at the north side of this outbuilding. There is also a three-bay, double-height outbuilding to the east of house.

The definitive history of the Hewson family is Memoirs of the House of Hewetson or Hewson in Ireland by John Hewetson (London: Mitchell & Hughes, 1901). He traces the family back to John Hewson or Hewetson (1498-1567), a glover, who was born in Settrington, Yorkshire, and became a Freeman of York and a member of the Merchant Adventurers’ Company.

His eldest son, Thomas Hewson, was also a Freeman of York. He moved to Ireland in the 1570s with his family, including his younger brother, Canon Christopher Hewetson, who became Prebendary of Howth, Vicar of Swords, and Treasurer of both Christ Church Cathedral, Dublin, and Ardfert. Since the move to Ireland, the names Hewetson and Hewson seem to have been interchangeable. Other variants of the family name include Hughson, Huetson and Huson.

Dominick Hewetson died in 1640, but, almost two years later, his body was dug up from the nave of Saint Brigid’s Cathedral, Kildare, by rebels and placed in a ‘garden’ outside the cathedral churchyard.

His son, Captain George Hewetson or Hewson, was one of the 49 Irish officers who remained loyal to King Charles I during the Civil War in the 1640s. He was supposedly related to the regicide and hard-line radical preacher, Colonel John Hewson of London, a self-proclaimed ‘Child of Wrath’ and the Cromwellian butcher of Drogheda.

George Hewson’s grandson, George Hewson (1662-1735), acquired land near Askeaton, Co Limerick, including Castle Hewson in Ballyengland, which he held under a lease from Brooke Brydges of High Holborn, Limerick.

Members of the family included the Ven Francis Hewson, Archdeacon of Aghadoe, Rector of Listowel and Sovereign (Mayor) of Dingle; Margaret Anne Hewson, who married the Revd George Maxwell, Rector of Askeaton; Admiral George Francis Hewson, who fought at the Battle of Trafalgar; and Thomas Hewson, President of the Royal College of Surgeons in Ireland. 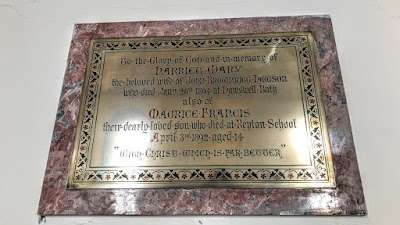 The memorial in Saint Mary’s Church, Askeaton, to Maurice Hewson, who died at 14 at school in Repton in 1892 (Photograph: Patrick Comerford, 2021)

The youngest son, Maurice, caught pneumonia while he was at school in Repton and died when he was only 14. He is remembered in a plaque in Saint Mary’s Church, Askeaton.

The eldest son, William Everard Gardiner Hewson, became a Justice of the Peace or magistrate for Co Limerick in 1909. He was a keen campanologist and rang the changes in many Irish and English cathedrals. Everard Hewson murdered a woman for no apparent reason in 1914. Elizabeth Costello (née Lynch) was a widow working as a maid in Castle Hewson.

A year later, William Everard Gardiner Hewson was found ‘Insane and Incapable of Pleading.’ He was detained at Dundrum Lunatic Asylum for the Clinically Insane, at ‘his majesty’s pleasure.’ He was released five years later, and was sent to a dower house near Rathkeale. He died in Barrington’s Hospital in 1957 and is buried in the grounds of Saint Mary’s Cathedral, Limerick. 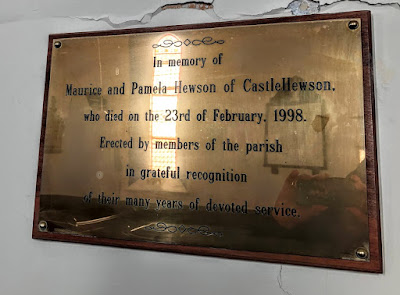 Meanwhile, Castle Hewson was inherited by John Hewson’s second son, John Gilbert Brownrigg Hewson, known as Gilbert Hewson. Gilbert Hewson married his distant cousin, Kathleen Violet Hewson, daughter of George Hewson of Ennismore, Co Kerry. He was elected to Dáil Éireann as an independent TD for Limerick in June 1927, but lost his seat at the September 1927 election and was an unsuccessful candidate in the 1932 election. A barrister, he was a member of Limerick County Council for many years. When he died in hospital in 1951, he was living at Lough House, Ballyengland.

His son, Maurice Hewson (1913-1998), was educated at Repton and Trinity College Dublin, where he was an outstanding cross-country runner, tennis player and boxer. He was a district commissioner and member of the British colonial administration of the Gold Coast (Ghana).

He became one of the District Commissioners charged with planning the Gold Coast Volta River Dam project. But the project collapsed when the Gold Coast gained independence as Ghana. Maurice Hewson returned to Ireland in 1957 and moved back to Castle Hewson and Lough House. He was a leading parishioner in Saint Mary’s Church, Askeaton.

Maurice Hewson and his wife Pamela died in a tragic fire at Lough House on 23 February 1998. Their detached, two-storey home, fronting a lake, was destroyed in the blaze. When fire brigade units from Rathkeale, Foynes and Newcastle West arrived at Lough House, they found the doors of the house and the gate to the driveway were locked, and the fire rapidly engulfed the house.

At the time, friends described them as a ‘wonderful and endearing’ couple who were very popular. Many media outlets reported the tragedy with headlines such as ‘relative of U2’s Bono killed in house fire.’

The memorials to the Hewson family in Saint Mary’s Church, Askeaton, include the East Window depicting the Good Shepherd. 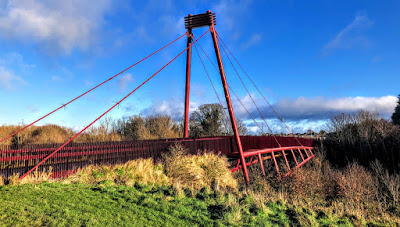 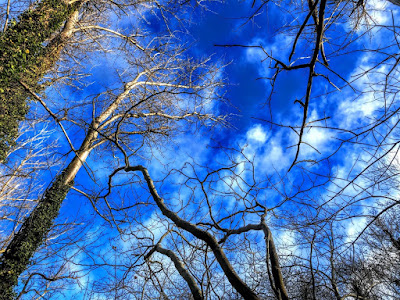 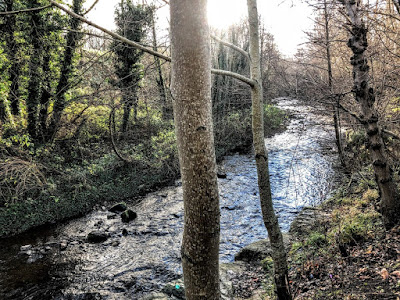