Chantries and hospitals
in Buckingham that
survived the Reformation

I was writing last week (1 June 2022) about Buckingham’s oldest building, the Chantry Chapel of Saint John the Baptist, which has had many uses over the centuries, including hospital, chapel, school and, more recently, second-hand bookshop and coffee shop.

But Buckingham has two other former chantries or hospitals dating from the 13th to 15th centuries and that survived the Reformation, Barton’s Chantry and Hospital on Church Street and Christ’s Hospital on Market Hill.

Barton’s Chantry and Hospital is about 100 metres south of the parish church of Saint Peter and Saint Paul, and close to the site of the original parish church in Buckingham. It was founded by John Barton in 1431. Families in Buckingham such as Barton and Fowler often acquired their wealth in London, in the law or in trade, but spent their new-found wealth in Buckingham, showing a strong sense of civic responsibility and endowing local charities.

John Barton was a lawyer, Recorder of London and MP for Buckinghamshire in 1397-1414. He paid for rebuilding the parish church, endowed a town charity, and built a row of almshouses in Church Street is known as Barton’s Chantry and Hospital.

Barton died on 7 February 1432. His will included a provision to pay a priest 10 marks a year for daily prayers, and supported the foundation of the group of almshouses later known as Barton’s Hospital) for six poor persons, each of whom was to receive a groat every week. Immediately after Barton’s burial in Saint Rumbold’s aisle in Saint Peter’s Church, Buckingham, 4,000 Masses were to be said on his behalf at a cost of £16 13s 4d.

The chantry was suppressed at the Tudor Reformation in the 16th century. But the hospital survived as almshouses that included six units or apartments.

The almshouses were rebuilt in 1701 and again in 1862. The present building dates from 1913, but a stone reset in the wall reads: ‘This hospital was founded in the year 1431 by John Barton. Rebuilt a second time in the F[ir]st year of the reign of His Majesty King George V 1910.’

The present hospital was founded in 1597 by Queen Elizabeth I to house ‘36 unmarried and maimed soldiers dwelling in the town.’ The building was of Tudor design and the plot extended down to the River Ouse.

By 1665, the ‘36 unmarried and maimed soldiers’ at Christ’s Hospital had been replaced by ‘seven ancient women.’

The income of Christ’s Hospital was derived from the profits of two fairs held annually in the town, together with the profits of the local wool markets. But clearly the money was insufficient and by the late 19th century the building had become very dilapidated and insanitary.

When Christ’s Hospital was rebuilt in 1897, the almshouses housed unmarried women. It was decided to replace it with what is now the present block which was built at a cost of £843 7s 9d or roughly £100,000 in today’s money.

These almshouses were built in 1897 of red brick in Flemish bond with some stone dressings, a half-hipped slate roof with ornamental ridge tiles, and brick internal stacks. It is a two-storey, three-window range, with plank doors that have panel mouldings and segmental-arched heads, York stone steps and round-headed arches. A stair leads to the continuous balcony along the front of building on timber posts with a wrought-iron balustrade. There are sash windows, a double bay window and York stone sills.

The chimney stack nearest the centre is larger than the other and bears a large limestone memorial tablet with a shaped pediment and a refurbished memorial tablet that gives a potted history of the building ‘Founded / AD 1312. Refounded by / Queen Elizabeth / AD 1597 / Rebuilt / in the 60th year / of the reign of / Queen Victoria / AD 1897.’

Buckingham Almshouses and Welfare Charity has administered the almshouses for many years. By 2006 or 2007, it was apparent that Christ’s Hospital was falling into disrepair. It was no longer fit for purpose and needed extensive refurbishment and modernisation.

A survey in 2008 confirmed the actual work needed. The project took six years and half a million pounds to complete, and was completed on 14 February 2014, with the first residents returning a couple of weeks later. It was opened officially in March 2015 John Bercow, then Speaker of the House of Commons and MP for Buckingham.

Christ’s Hospital on Market Hill, Buckingham, stands on the site of the Hospital of Saint Lawrence, a leper hospital founded in 1227 (Photograph: Patrick Comerford, 2022)

‘Moses his chosen stood before him in the breach …’ (Psalm 106: 23) … a statue of Moses in the Church of Saint Peter and Saint Paul, Athlone (Photograph: Patrick Comerford)

Psalm 106 is the final psalm in Book 4 (Psalms 90-106) of the Hebrew psalter. This is one of the longer psalms, and has 48 verses. It is sometimes known by its Latin name Confitemini. In the slightly different numbering system in the Greek Septuagint and Latin Vulgate, this psalm is counted as Psalm 105.

This psalm and Psalm 107 are closely connected together, and the division of the fourth and fifth books does not correspond to any difference of source or character, as is the case in the other books.

The first portion of this Psalm moves from praise and thanksgiving to petition and confession, through the full range of human emotion and the complexities of our relationship with God, relying on God’s continuing faithfulness.

The second portion of this Psalm moves to a confessional tone.

The closing words in verse 48 correspond to the concluding verses of Psalms 41 and 89, that end Books 1 and 3 of the psalter. The liturgical direction ‘let all the people say, ‘Amen.’ Praise the Lord!’ seems to imply that the doxology here is not a mere mark of the end of the Fourth Book, but was actually sung at the close of the Psalm.

In some Jewish traditions, this psalm is recited on the second day of Passover. 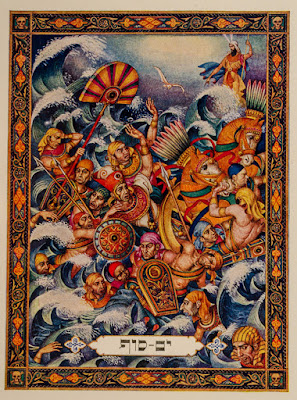 1 Praise the Lord!
O give thanks to the Lord, for he is good;
for his steadfast love endures for ever.
2 Who can utter the mighty doings of the Lord,
or declare all his praise?
3 Happy are those who observe justice,
who do righteousness at all times.

4 Remember me, O Lord, when you show favour to your people;
help me when you deliver them;
5 that I may see the prosperity of your chosen ones,
that I may rejoice in the gladness of your nation,
that I may glory in your heritage.

6 Both we and our ancestors have sinned;
we have committed iniquity, have done wickedly.
7 Our ancestors, when they were in Egypt,
did not consider your wonderful works;
they did not remember the abundance of your steadfast love,
but rebelled against the Most High at the Red Sea.
8 Yet he saved them for his name’s sake,
so that he might make known his mighty power.
9 He rebuked the Red Sea, and it became dry;
he led them through the deep as through a desert.
10 So he saved them from the hand of the foe,
and delivered them from the hand of the enemy.
11 The waters covered their adversaries;
not one of them was left.
12 Then they believed his words;
they sang his praise.

13 But they soon forgot his works;
they did not wait for his counsel.
14 But they had a wanton craving in the wilderness,
and put God to the test in the desert;
15 he gave them what they asked,
but sent a wasting disease among them.

16 They were jealous of Moses in the camp,
and of Aaron, the holy one of the Lord.
17 The earth opened and swallowed up Dathan,
and covered the faction of Abiram.
18 Fire also broke out in their company;
the flame burned up the wicked.

19 They made a calf at Horeb
and worshipped a cast image.
20 They exchanged the glory of God
for the image of an ox that eats grass.
21 They forgot God, their Saviour,
who had done great things in Egypt,
22 wondrous works in the land of Ham,
and awesome deeds by the Red Sea.
23 Therefore he said he would destroy them—
had not Moses, his chosen one,
stood in the breach before him,
to turn away his wrath from destroying them.

24 Then they despised the pleasant land,
having no faith in his promise.
25 They grumbled in their tents,
and did not obey the voice of the Lord.
26 Therefore he raised his hand and swore to them
that he would make them fall in the wilderness,
27 and would disperse their descendants among the nations,
scattering them over the lands.

28 Then they attached themselves to the Baal of Peor,
and ate sacrifices offered to the dead;
29 they provoked the Lord to anger with their deeds,
and a plague broke out among them.
30 Then Phinehas stood up and interceded,
and the plague was stopped.
31 And that has been reckoned to him as righteousness
from generation to generation for ever.

32 They angered the Lord at the waters of Meribah,
and it went ill with Moses on their account;
33 for they made his spirit bitter,
and he spoke words that were rash.

34 They did not destroy the peoples
as the Lord commanded them,
35 but they mingled with the nations
and learned to do as they did.
36 They served their idols,
which became a snare to them.
37 They sacrificed their sons
and their daughters to the demons;
38 they poured out innocent blood,
the blood of their sons and daughters,
whom they sacrificed to the idols of Canaan;
and the land was polluted with blood.
39 Thus they became unclean by their acts,
and prostituted themselves in their doings.

40 Then the anger of the Lord was kindled against his people,
and he abhorred his heritage;
41 he gave them into the hand of the nations,
so that those who hated them ruled over them.
42 Their enemies oppressed them,
and they were brought into subjection under their power.
43 Many times he delivered them,
but they were rebellious in their purposes,
and were brought low through their iniquity.
44 Nevertheless, he regarded their distress
when he heard their cry.
45 For their sake he remembered his covenant,
and showed compassion according to the abundance of his steadfast love.
46 He caused them to be pitied
by all who held them captive.

47 Save us, O Lord our God,
and gather us from among the nations,
that we may give thanks to your holy name
and glory in your praise.

48 Blessed be the Lord, the God of Israel,
from everlasting to everlasting.
And let all the people say, ‘Amen.’
Praise the Lord!

The USPG Prayer Diary this morning (Thursday 9 June 2022) invites us to pray:

Let us pray for climate activists and the climate movement. May we lend our voices to this movement, helping them to bring about positive change where possible.