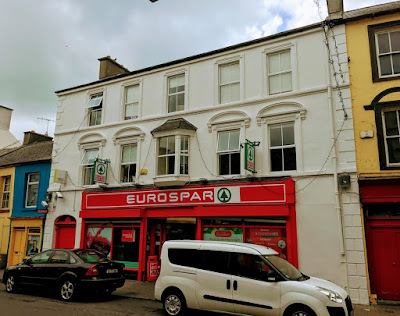 The Eurospar supermarket on Main Street, Rathkeale, dates back to about 1820 (Photograph: Patrick Comerford, 2017)

The Bank Holiday on Monday, and a funeral in Tarbert, Co Kerry, on Monday and today [6 June 2017] mean I have not been to Rathkeale this week for my usual visit to the parish, the church and the school, and my walks by the banks of the River Deel.

I am planning to be back in Rathkeale next Sunday, which is Trinity Sunday and so also the Patronal Festival of Holy Trinity Church, Rathkeale.

As I walk through the streets of Rathkeale, sometimes I am startled not so much by the grandeur of some of the public buildings, such as the churches and the former courthouse, or by the once elegant Regency buildings with their Wyatt windows, but by what appear to be ordinary buildings with everyday shopfronts.

The Eurospar supermarket on Main Street looks like an ordinary shopfront at first sight, but this five-bay, three-storey building, is almost 200 years old and dates back to about 1820.

There is a modern shopfront to the ground floor on the front or north elevation. There is a pitched slate roof with rendered chimney-stacks and there are rendered walls and quoins.

The timber sliding sash windows have been replaced with PVC, but they still have their render surrounds, and those to the first floor fluted and with segmental arches above. There is a particularly charming bay-window style feature in the middle of the first floor.

Next door, the shop once known as The Deel is now disused, but this three-bay three-storey building was built around 1820, and retains many features that date back about 200 years.

At the ground floor the shopfront is at the north or front elevation. Here too, the building has a pitched slate roof with rendered chimney-stacks. There are rendered walls, timber sliding sash windows, render surrounds, and those on the first floor are fluted and with segmental arches above while those on the second floor are fluted.

Despite its poor state of repair, this building is notable for its retention of timber sash windows and for the render detailing to its façade.

It is interesting too that the townland name for this part of Rathkeale is the English Tenements. 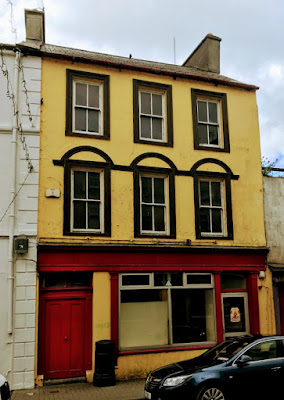 A disused shop with architectural details that have survived for 200 years (Photograph: Patrick Comerford, 2017)

Inside the Victorian glass house in the Vandeleur Walled Garden in Kilrush, Co Clare (Photograph: Patrick Comerford, 2017; click on image for full-screen view)

On the way back from Kilkee to Kilimer to catch the ferry across the Shannon Estuary to Tarbert on Saturday, a small group of us stopped in Kilrush to visit the Vandeleur Walled Gardens on the outskirts of the town.

Kilrush (Cill Rois, ‘Church of the Woods’) is near the mouth of the River Shannon in south-west Co Clare and is listed as one of Ireland’s Heritage Towns. Until 1956, the area was also part of the West Clare Gaeltacht.

Like many Irish towns and villages with Kil in their name, the origins of Kilrush refer to a church. This may refer specifically to the remains of a church in the churchyard of the former Church of Ireland parish church at Grace Street. But some local people claim that the first settlement at Kilrush Creek was linked with the monastic settlement on Scattery Island in the Shannon Estuary.

However, Kilrush has existed only since the 16th century. It is not mentioned in records until the late 1500s, when a number of ships from the scattered Spanish Armada entered the Shannon Estuary and anchored. 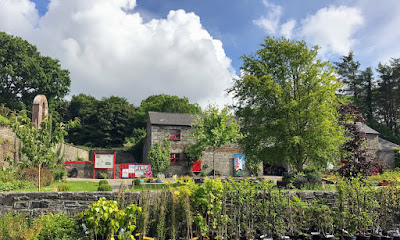 The Walled Garden was part of the Kilrush estate of the Vandeleur family (Photograph: Patrick Comerford, 2017)

The first member of the Vandeleur family in Co Clare is said to have been Maximillian Van der Leur, a Dutch merchant who was based in Sixmilebridge in the early 17th century. The family moved to the Kilrush area in the mid-17th century as tenants of the Earl of Thomond, leasing land at Ballynote around 1656. The family soon became the most prominent landlord family in West Clare.

The first Vandeleur in the area was Giles Vandeleur, and the family originally bought the lands around Kilrush from the Earl of Thomond in 1687. Giles was the father of Canon John Vandeleur, who became the first Church of Ireland Rector of Kilrush in the early 1700s and was appointed Prebendary of Iniscathaigh in 1687. He was buried at Kilrush in 1727.

In 1749, his son, John Vandeleur, son of Canon John Vandeleur, bought lands in West Clare worth almost £10,000 from the fortune he accumulated as a commissioner for applotting quit rents in Ireland.

With wealth acquired through marriage and political sleight of hand, he decided to develop the town of Kilrush. The Napoleonic Wars (1799-1815) brought an improvement in agricultural prices, and Kilrush and the surrounding countryside found new prosperity. By 1808, the town was ‘rising fast into some consequence,’ and John Ormsby Vandeleur built the large family home, Kilrush House, that year.

John Ormsby Vandeleur planned the layout of the town as it is seen today. The square and the Market House or Town Hall, Frances Street, which is said to be Ireland’s second widest street, Moore Street and John Street were completed by the early 1800s, Merchants Quay, the quays and a Customs House were built, making the town an official port for exports. Henry Street, Vandeleur Street and the other streets followed.

Other key buildings built in this period included the Church of Ireland parish church (1813), now a centre for Comhaltas Ceolteori Eireann; the Bridewell, now SuperValu; a Methodist church at Burton Street, since demolished, and a Quaker meeting house at the back of Moore Street and Stewart Street, also demolished.

By 1817, a steamboat was plying regularly between Limerick and Kilrush, and the increasing popularity of Kilkee as a bathing resort brought many travellers to Kilrush on their way.

The novelist Charles Lever (1806-1872) briefly practised medicine in Kilrush as a young doctor, during the 1832 cholera epidemic.

Five years later, Samuel Lewis described Kilrush in 1837 as a seaport, market and post town. The main industries were flannels, stockings and bundle cloth. Branches of the national and agricultural banks had been opened in the town and a police station was there too, as well as a small prison and court house.

Samuel Lewis describes Kilrush House in 1837 as ‘a handsome and spacious mansion immediately adjoining the town, and commanding an extensive view of the Shannon, and the Clare and Kerry shores.’

Saint Senan’s Roman Catholic Church was completed in 1839 on a site donated by Crofton Moore Vandeleur and Kilrush Workhouse was built in 1842.

The Vandeleurs were landlords in Kilrush for over 200 years and the family dominated social, political and commercial life in the area. They built much of the town’s infrastructure, planning the streets, funding building projects and providing local employment.

However, the Great Famine (1845-1849) brought much hardship to Kilrush. Famine, evictions, fever and cholera reduced the population of south-west Clare to such an extent that it never again attained its pre-Famine numbers.

Crofton Moore Vandeleur was MP for Kilrush from 1859 to 1874. But in the post-Famine era, the Vandeleur name became synonymous with the worst of landlord evictions, with over 20,000 people evicted in the Kilrush area. The mass evictions turned much of the town’s population against its landlords, marking the beginning of the end of this family’s dominant role in the area. The mass evictions that began in the Famine period continued until the 1880s, and Hector Stewart Vandeleur took over the estate in 1881, just as the Land War was beginning.

His exploits were worse because his wife dislike Kilrush House, making him an absentee landlord whose actions were carried out by an agent. By the 1880s, the measures were attracting huge resistance and media attention. In July 1888, the New York Times reported that 500 dragoons and infantry had been brought in to oversee the evictions of 114 families. ‘All the houses are barricaded, but the police are provided with battering rams. Parish priests are actively at work counselling submission, and it is hoped that there will be no bloodshed. The arrears of rent amount to £80,000.’

The local population mounted a campaign of obstruction that summer, shutting shops, cutting bridges, and ringing warning bells. By 1889, a compromise was agreed on the rent arrears and the tenants were reinstated.

However, the Vandeleurs’ long association with Kilrush was soon to end. Eight years later, in 1897, the ancestral home at Kilrush House was gutted after fire broke out in the servants’ quarters. The Vandeleur family moved to Cahercon House, a house they owned in nearby Kildysert. The newly-formed Land Commission set about its work, radically changing land ownership in Ireland, making former tenants outright owners of their holdings.

From the 1920s on, the town entered a peaceful era, with new phases of building and improvements in infrastructure and amenities. Electricity was introduced in 1922, and sewage and public water supplies was established in the1930s. The Market House, renamed the Town Hall, was rebuilt in the 1930s and the Maid of Erin monument was restored to its plinth. 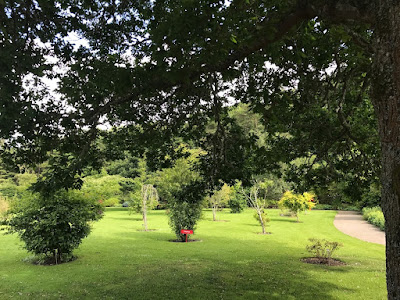 The remains of Kilrush House continued to be a landmark for much of the 20th century. But the house was deemed unsafe in 1975 and was finally demolished that year, reportedly because of safety hazards. The main car park in Kilrush Woods stands on the site of the house today.

The impressive walled garden on the grounds of the old Vandeleur estate can still be visited today. The Vandeleur Walled Garden and stables, which were part to the ancestral home, have been refurbished and are now a popular visitor attraction.

The Walled Garden covers over 2 acres and is set among 420 acres of native woodland. It was restored around the old paths with a horizontal maze, unusual water features and a Victorian-style working glasshouse.

The former fruit and vegetable garden specialises in unusual and tender plants that thrive in the area’s unique western micro-climate. There is a children’s play area, a butterfly trail and a garden centre with a wide variety of plants on sale.

Past research had already made me familiar with the life story of another member of this family, Canon William Elder George Ormsby Vandeleur (1875-1965), who was a missionary in South Africa in the early 20th century with the Society for the Propagation of the Gospel (SPG, now USPG) and later was involved in theological education in the Church of Ireland.

Canon Vandeleur was a curate in Chester for a short time before serving his early ministry as a missionary with the Society for the Propagation of the Gospel (SPG, now USPG) in South Africa in 1902-1905 and again in 1908-1909. He returned to Ireland in 1910 and was the Rector of Kiltennel and Ardamine, Co Wexford, before becoming Warden of the Divinity Hostel.

Canon Vandeleur also played a major role in the Church of Ireland’s 1,000th anniversary commemorations of Saint Patrick in 1932. He drew up the programme for a series of lectures on ‘Saint Patrick’s Life and Times,’ the ‘Missionary Tradition of the Irish Church,’ and the ‘Connection of the Parishes of the Church of Ireland with the ancient Irish Church.’ His collection ended up in Saint Patrick’s Cathedral in 1932 and has featured in the RCB ‘Archives of the Month’ series.

The West Clare Railway ran its last train in 1961. Seven years later, the Killimer-Tarbert car ferry opened up a faster route to Co Kerry in 1968, and after our visit to the Vandeleur Walled Gardens in Kilrush we caught the ferry back to Tarbert and continued on to Askeaton. 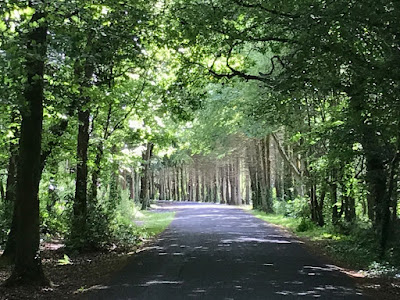 The tree-lined avenue that once led up to Kilrush House (Photograph: Patrick Comerford, 2017)