Despite it all, it was a good walk on the beach in Donabate 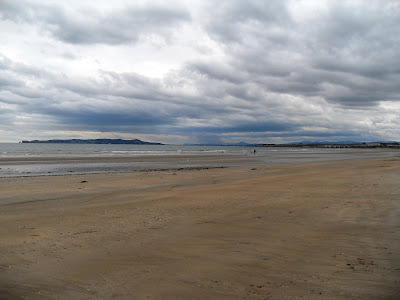 The sandy stretch of beach at Donabate late yesterday, with views across to Howth Head, the Dublin Mountains, the Sugarloaf and Bray Head (Photograph: Patrick Comerford, 2011)

It is two weeks since I last had a walk on a beach. I had a walk around the harbour and along the beaches of Skerries after that unsuccessful attempt to reach Lambay Island, and then a walk along the cliffs and the beach at Greystones a fortnight ago.

Despite my country walks and lakeside walks during my stay in Glaslough, Co Monaghan, earlier this week, I have been missing my walks along the sandy shores of the east coast. And so, before meeting a few people in Dublin airport last night ahead of today’s seminar on Interfaith Dialogue, I visited my cousin Mary Lynders in Portrane, where she shared the good news that fundraising at the Great August Bank Holiday Sale in aid of Heart to Hand and its projects in Romania and Albania had now reached over €32,000.

Despite all expectations, this surpasses last year’s figures. In the present economic climate, this is a major achievement for Mary and her dedicated band of volunteers and supporters.

Despite the grey clouds overhead, there was a clear view from The Quay in Portrane out east to Lambay Island and north to Rush. But the tide was in at the Burrow Beach, and there was little room for a rambling walk along the sand, and so two of us headed back through Donabate for a walk on the beaches and the rocks at Corballis and Balcarrick.

Despite the grey clouds overhead, once again there were clear views from the sandy shores north-east to Lambay Island, south–east to Ireland’s Eye and Howth Head, and south across to the Dublin Mountains, Bray Head and the Sugar Loaf.

Despite the drop in evening temperatures and an approaching early dusk, a pair of swimmers were braving the cold waters, and a mother and her children appeared to be enjoying a late picnic on the rocks beneath the Martello Tower.

Despite the notices prohibiting horses from the beach at the weekend, one man was out exercising his young horse, and a few people were out walking their dogs too.

Despite the continuing pain in my left shoulder that is creeping down into my arm and even into my fingers, I enjoyed my walk on the beach in Donabate last night.

Despite the lateness of the hour, four of us headed back from the airport last night to enjoy a late, lengthy dinner in Bellagio in Terenure.

Despite having sarcoidosis, it’s never going to have me. And I’m looking forward to today’s seminar and tomorrow’s ordinations in the Diocese of Connor. 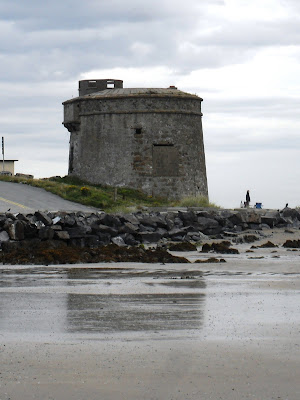