On the Pugin trail again – in Dublin 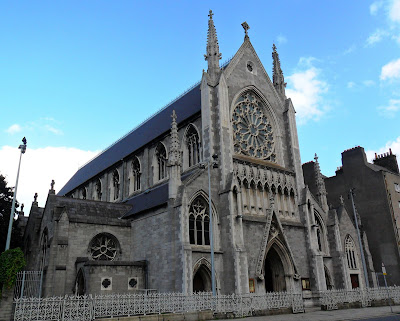 Saint Saviour’s, one of “the most important of [JJ McCarthy's] city churches” ... but was it designed by AWN Pugin? (Photograph: Patrick Comerford, 2010)

I was on the Pugin trail again yesterday – but this time in Dublin. In England, AWN Pugin’s best churches are concentrated in Staffordshire, which Sir Nikolaus Pevsner famously dubbed ‘Pugin-Land’ in 1970s, and where I spent some time during the summer visiting some of those churches, including Cheadle and Uttoxeter. In Ireland, the same appellation could be applied to Co Wexford, where I have been visiting his churches in turn in recent months, including Saint Peter’s Wexford, Saint Aidan’s, Enniscorthy, and Saint Michael’s Gorey, as well as churches built by his Wexford-born disciple, Richard Pierce, such as the ‘Twin Churches’ in Wexford and the parish church in Kilmyshall.

However, Pugin has never been accredited with building a church in Dublin, although there are many churches designed by his son and son-in-law, Edward Pugin and George Coppinger Ashlin, especially ‘John’s Lane,’ and by the Dublin-born architect who claimed his mantle as the ‘Irish Pugin,’ J.J. McCarthy.

After Pugin’s death, McCarthy completed Pugin’s cathedrals in Enniscorthy and Killarney, and his work at Saint Patrick’s College, Maynooth. But two of McCarthy’s earliest churches in Dublin were Saint Catherine’s, Meath Street, and Saint Saviour’s, Dominick Street, both built in 1852, the year in which Pugin died.

Between a meeting of the academic staff in the Church of Ireland Theological Institute and the board of Christ Church Cathedral this week, I found time to visit Saint Saviour’s Church in Dominick Street, which runs between Parnell Street and Bolton Street.

Jeanne Sheehy has describes Saint Saviour’s as “the most important of [his] city churches.” This church is in the 14th century Decorated Gothic style. The contractor was William Haughton Beardwood, William Haughton Beardwood, a Lancashire convert to Roman Catholicism, who also worked with McCarthy on Saint Catherine’s in Meath Street. In both churches, their clerk of works was John Doyle, who was McCarthy’s contemporary at the RDS School of Drawing in Architecture.

McCarthy’s choice of craftsmen who had worked closely with Pugin shows how much he had inherited not only his mentor’s mantle and his inner circle of artists too: the carvings are by Henry Lane, the painted decorations by Thomas Earley, the metal work by John Hardman of Birmingham, and the stained glass by Michael O’Connor, who over the previous ten years had developed a successful career in England working with Pugin and Butterfield.

The interior of Saint Saviour’s is very fine, with high arches, delicate tracery and carving, making it one of the most beautiful churches in Dublin. The north aisle and south aisle are later additions.

This was the finest of McCarthy’s Dublin churches, at least until its internal reorganisation in the aftermath of the liturgical reforms of Vatican II, when the fine Caen stone altar and the Gothic reredos were removed. Nevertheless, the church retains much of its original atmosphere.

Saint Saviour’s, Saint Catherine’s and McCarthy’s Star of the Sea Church in Sandymount were designed in quick succession over sixteen months in 1851 and 1852, and the foundation stones were laid one after another in May 1851 and June and September 1852. Naturally, questions were asked whether McCarthy was the sole author and creator of each work.

McCarthy had been corresponding with Pugin in early 1852, seeking advice on his own projects and offering to undertake for half the fee and all the travelling expenses the management of some of Pugin’s commissions. The collaboration between the two architects was difficult and it was cut short by Pugin’s death in 1852. Did that collaboration extend to McCarthy’s churches in Meath Street and Dominick Street in Dublin?

In mid-January 1852, Pugin received a letter from McCarthy asking for drawings for a church in Dublin. Pugin’s most recent biographer, Rosemary Hill, points out that it was the sort of arrangement Pugin would not have tolerated a few months earlier, even a few weeks earlier. But he wrote back on 15 January, agreeing to undertake “finishing all the drawings details & anything required your superintending.”

Which church in Dublin did Pugin design for McCarthy? And did McCarthy then claim it as his own – just as Barry in the same year would claim Pugin’s work in the Palace of Westminster as his own?

Pugin’s letter, dated 15 January 1852, reads like a defence of his plan for the chapel at Maynooth: “Let everyone see and hear by the chancels … down the nave. Keep the churches bright with good windows … you will see that if you honour the chancel we will make your church a chancel.” But McCarthy was not appointed as the architect for the chapel in Maynooth until 1875, and only the shell of the chapel was completed at time of his death. Sandymount was being built by the time of Pugin’s letter, and work on Saint Saviour’s would not begin for another eight months. It is difficult to imagine that by mid-January 1852, McCarthy was not anticipating the commission he was about to receive for Saint Catherine’s in Meath Street.

For the rest of his life, McCarthy defended himself against constant and persistent allegations that he was not the true architect of Saint Saviour’s and that it was, in fact, the work of Pugin.

This may be so, but what about Saint Catherine’s?

When I visited Saint Catherine’s a few weeks ago, it appeared in so many ways to be yet another of Pugin’s ideal English country parish church in the Decorated Gothic style. The commission came through the goodwill of those closest to Pugin’s own patrons in Staffordshire and Co Wexford, the Powers who were intermarried with the Talbot family, and the craftsmen who worked on it had all been engaged in Pugin’s own works in Ireland.

If Pugin did not design Saint Saviour’s, and if McCarthy was justified in defend this as his own design, then, I found myself asking which Dublin church did Pugin design for him?

I must go back and have another look at Saint Catherine’s. Meanwhile, whether Saint Saviour’s is Pugin’s or McCarthy’s, it remains one of “the most important” of the Gothic revival churches in Dublin.