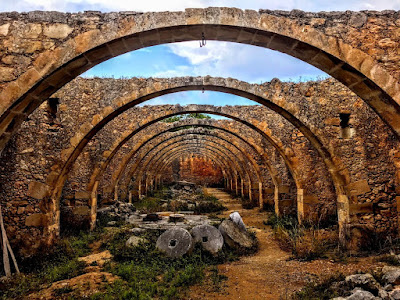 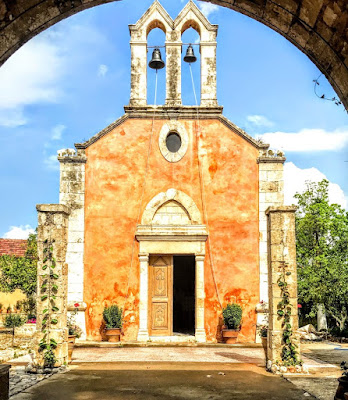 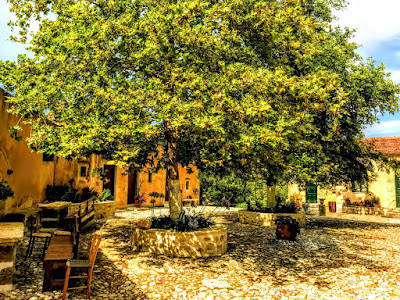 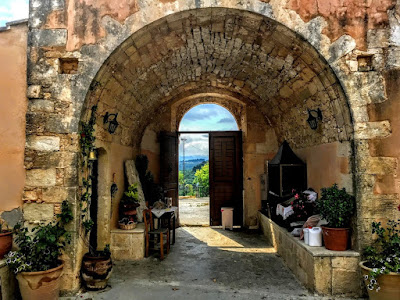 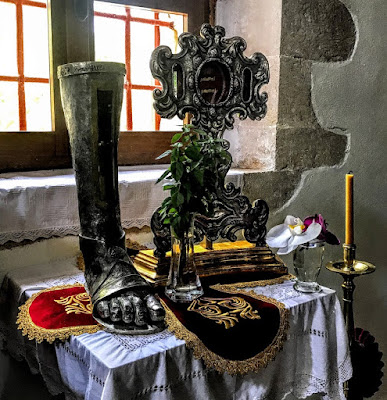 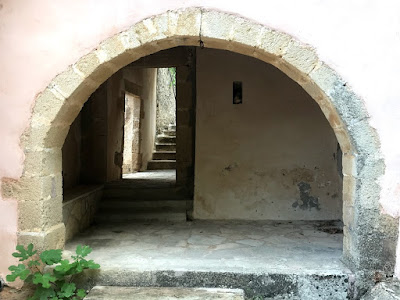 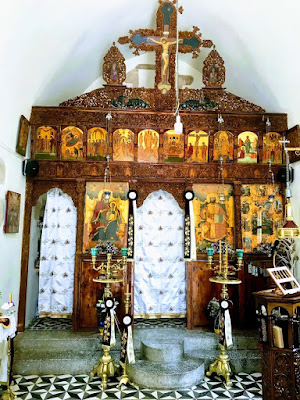 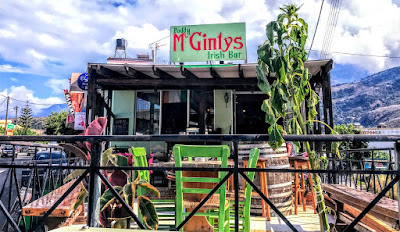 Paddy McGinty’s Irish Bar stands at an eye-catching junction on the way in and out of Georgioupoli (Photograph: Patrick Comerford, 2018)

I said last weekend that Irish pubs are not my scene. But during my holiday in Crete I was quite taken by Paddy McGinty’s Irish Bar in Georgioupoli, and its interesting story.

McGinty’s opened earlier this month [June 2018] and it is impossible not to notice the place. It is in an enviable location on a junction that everyone passes as they enter or leave Georgioupoli.

The bar is run by David Hartley from Skipton in Yorkshire and Clare Walshe from Kilrush, Co Clare. Dave lived in Co Clare for ten years, working in the Vandeleur Gardens in Kilrush and with Fergal Hennessy, a vet in Kilkee. Clare worked at the Doonbeg Golf Course before it was taken over by Donald Trump. 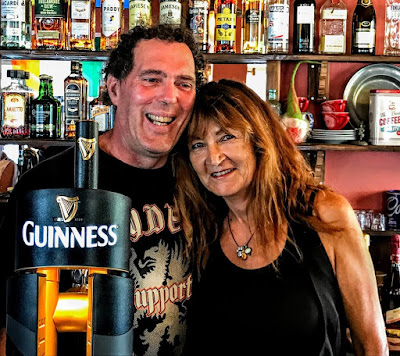 The couple met while they were both working in bars and playing music in Co Clare. There Dave was an enthusiastic ruby player and he is also the author of a number of children’s books.

But why did they decide to move to Crete?

Dave has been coming to Crete regularly, and his historical novel, Prince of Lilies (2013), set in Knossos, is the result of if his regular visits to Crete for 15 years.

When he enjoyed a Saint Patrick’s Day celebration in Crete, he asked himself ‘Wouldn’t it be good to have Paddy’s Day every day?’

They identified the ideal premises in Georgioupoli. It was vacant for a long time, but he realised its potential and its eye-catching location. 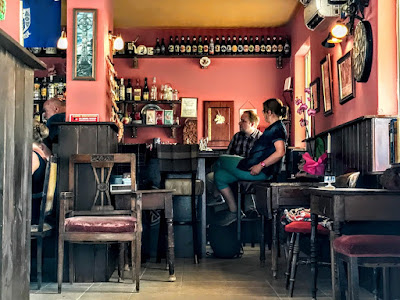 The place had been a Chinese clothes shop for years ‘and everywhere was covered in wall-to-wall pink formica.’ But he went ahead and signed the lease.

McGinty’s is named, of course, after ‘Paddy McGinty’s Goat’ in Val Doonican’s song. Dave has a well-stocked repertoire of Irish ballads and folksongs, and he jokes they could have named the place Rafferty’s after ‘Rafferty’s Motor Car’ or Delaney’s after ‘Delaney’s Donkey.’

But ‘McGinty’s’ also recalls his own enthusiasm for the bodhran, and makes a connection with the Kri Kri, the feral goat found throughout this Greek island.

The goat theme is continued throughout the bar, with goats appearing in wooden carvings at the bar and as bookends on the bookshelves.

Joe Fjær, a Norwegian hotelier from Trondheim who runs the Mythologia Hotel in Georgioupoli, offered to help source the antique furniture and fittings and became a business partner. But Dave was anxious that his bar should be an authentic Irish pub, and not a twee, themed bar like those found in many resorts. 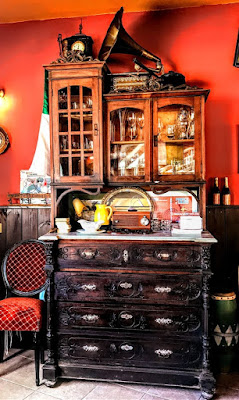 The furniture in McGinty’s was sourced mainly by Joe Fjær, a Norwegian hotelier (Photograph: Patrick Comerford, 2018)

Dave took Joe to Ireland for a week, especially to Doolin and Doonbeg in Co Clare. Together, they visited every bar and pub they could find on the west coast – including Comerford’s of Doonbeg – so that Dave could show Joe what a real, authentic Irish pub is like.

It took 20 days to get the bar ready – interrupted by a helping a friend to move to Spain – so that the bar was open within 30 days of signing the contract for the premises.

There is live music in the bar every night, with Dave and Clare singing and playing the guitar and the bodhran. The place is stocked with Guinness, Kilkenny and Magner’s, there is a yellow-and-blue banner from Clare’s home country, Co Clare, and the furniture could be straight out of an Irish farmhouse a generation ago. 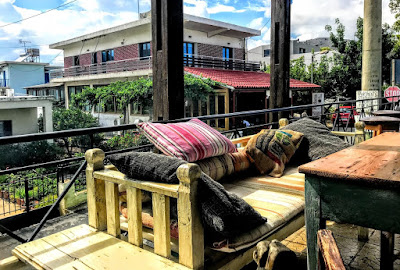 From bier to beer … a former funeral bier is now part of the furniture in McGinty’s (Photograph: Patrick Comerford, 2018)

Although, he points out that much of the furniture is actually Greek, including a new use found for what had once been a funeral bier but is now among the tables in the outside area.

Its place is not unsuitable, as Dave had worked for years in England as an undertaker. In a way, he knows how to make the connection between funerals and furniture.

There are pokey corners. There are eccentric pieces from a by-gone age, such as old radios and record players and old crockery. And, of course, there is a framed poster of Val Doonican. In one cosy corner, bookshelves are stacked to the ceiling with English-language books found in a house clearance in Crete, but have the look of a collection that could have been accumulated in any family over the generations. 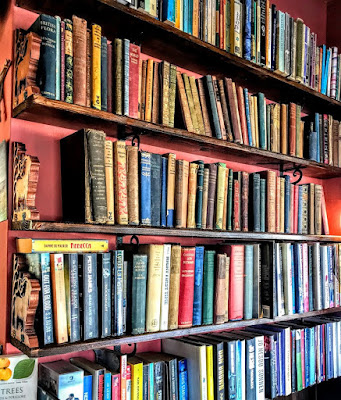 The bookshelves in a cosy corner came from a house clearance (Photograph: Patrick Comerford, 2018)

I pointed out that there were few Irish tourists in Georgiopouli and that the hotels cater mainly for German and Scandinavians. But Dave says Germans and Scandinavians love the Irish theme and his Irish music: ‘They go barmy for it.’

But 30 per cent of his customers every night are Irish, and Ryanair’s direct flights from Dublin to Chana could change the figures for Irish tourists in the area.

There are 3,000 ex-pats living on the peninsula behind Georgioupoli, and they are beginning to form part of his ready stream of visitors. He plans to stay open throughout the winter, when only other two bars remain open in Georgioupoli, the Cotton Club on the seafront and Tito’s on the town’s main square.

They have only been open since earlier this month. But Dave and Clare are already talking about plans to put in an open fire and to explore the potential of offering Irish food. The empty space downstairs might even become a microbrewery. The future is looking like an interesting prospect for McGinty’s. 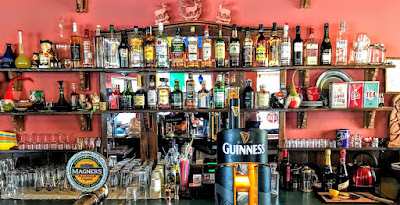 McGinty’s has been transformed from an abandoned formica covered shop into an Irish pub (Photograph: Patrick Comerford, 2018)