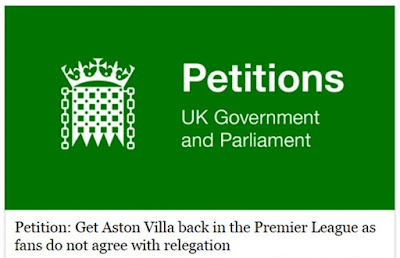 Petition: Get Aston Villa back in the Premier League as fans do not agree with relegation

When an Irish team is not playing, I naturally support England. I was sorry to see England go out of the Euro championship last night, and it was cringing to see this second British exit from Europe in a matter of days, this time at the hands of tiny Iceland, which is not even a member of the EU.

It is probably the greatest English defeat in soccer. It was Brexit on Friday, followed by E-xit last night.

But I did smile when I saw a Facebook posting headed:

Petition: Get Aston Villa back in the Premier League as fans do not agree with relegation.

Cameron is a Villa fan so make it happen, we do not agree with this so change it back.

Although the posting remains on the wall of some of my Facebook friends, the link is broken and the original posting has been taken down. It seems that even the copyright minders in Parliament who protect images like this are finding it difficult to have a sense of humour these days too.

Early in the 2011-2012 season, he took his young son to watch Aston Villa as they faced QPR at Loftus Road. He once said: “The first game I ever went to was an Aston Villa game and so I am an Aston Villa fan.”

It’s easy for him to have a proprietorial attitude towards Villa … after all, his uncle, Sir William Dugdale, who lived near Tamworth until he died in 2014, chaired Villa from 1975 to 1982 and took the future Prime Minister to his first ever game as a 13-year-old.

But in a public blunder last year, Cameron gave a speech celebrating the diverse allegiances of British people in which he lauded Britain: “Where you can support Man United, the Windies and Team GB all at the same time. Of course, I’d rather you supported West Ham .. eh, hem.”

I wonder whether his decision to step down is going to give him more time to familiarise himself with the team he is supposed to be a fan, now that fallen out of Premier League … just like he has led Britain out of the European equivalent in political and economic terms.

Already, Aston Villa is treating its fans as cash cows, selling the new home, away and goalkeeping kits for the upcoming 2016/17 campaign online as they say they aim for promotion back to the Premier League.

But some fans are cynical in their online comments, saying they are going to wait until they see how Villa is performing before they buy.

Aston Villa and Newcastle will both be shown live on Sky Sports on the opening weekend of the 2016/2017 Championship season. Both teams were relegated from the Premier League. Newcastle get the Championship season underway on Friday 5 August with a trip to Fulham, and Aston Villa will then be in front of the cameras on Sunday 7 August at 4.30 p.m.

This will be Roberto Di Matteo’s first competitive game in charge, as they travel to last year's play-off finalists Sheffield Wednesday.

Three days later [10 August], Aston Villa travel to Luton to meet the League Two Hatters in the first round of the newly named EFL Cup.

Last season was the most miserable for Villa supporters since the Championship was rebranded in 1992. While history alone does not make you entitled to more glory, it is sad to see a team lose its way so badly after clear mismanagement at the top.

Recently, Metro.co.uk said it was in mourning over Villa’s collapse, and gave some reasons why.

Villa has a great history. Although it has not won the league since 1981, Villa has almost always been a top-half club with big ambition to relive the glory years. As well as seven league titles, Villa has won the FA Cup seven times, the League Cup five times, and the 1982 European Cup.

Yes, I thought, when I read that, Britain was better in Europe when Villa was in Europe.

Villa’s glory years may not have come in the Premier League era, but Villa has provided some of England’s top players down the years.

Those big names include Dwight Yorke, who scored 97 goals for Aston Villa and later won the treble with Manchester United, as well as Gareth Barry, James Milner, Ashley Young and Christian Benteke, who all launched their careers at Villa Park before going on to play for bigger clubs. Although Villa has often been forced to sell top players, Villa fans have got used to seeing more quality and commitment than was on display from the pitiful squad last season.

Villa Park has been Aston Villa’s home since 1897 and is truly one of the great English football grounds. Flashy modern stadiums are becoming the norm in an increasingly soulless Premier League, but that was never the case at Villa Park. As well as hosting Villa games, it has also been the venue for many FA Cup semi-finals down the years, and also hosted three matches during England’s victorious 1966 World Cup campaign.

Villa Park is a ground deeply forged into English football history, and it feels wrong that it will only be hosting Championship football next season.

The chairman Randy Lerner is hugely unpopular with fans, and he has more than played his part in Villa’s downfall since he took over. After buying the club in 2006, Lerner enjoyed early success with Martin O’Neill as his manager, but big spending on too many average players on long-term contracts left the club in a poor financial state.

Since then, one bizarre managerial appointment after another made last season’s relegation almost inevitable, with little effort to listen to supporters or to show respect for the club’s traditions.

Villa’s loyal fans have not had a lot to cheer about in the last few years, but they are some of the most loyal and vocal. Their travelling support in particular is excellent, and they deserve better after years of protesting against those at the top, who have not listened to them.

Villa fans will continue to cheer on their side with great gusto even in the unfamiliar territory of English football’s second tier. I’ll be cheering for them too … even if David Cameron finds it easy to forget who they are, and even if there is no petition to Parliament to reverse their relegation from the Premier League.

Who is going to be first to organise a petition to Parliament asking for a replay against Iceland?