The funeral of a priest, colleague and friend 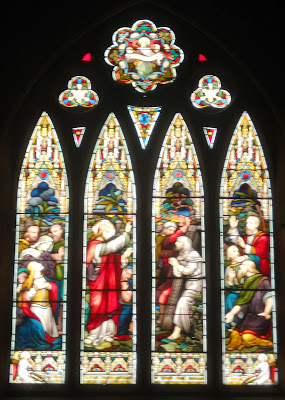 The Raising of Lazarus from the Dead ... the window in the North Transept of the Church of Saint John the Baptist, Clontarf (Photograph: Patrick Comerford, 2012)

It is always a sad occasion when a colleague and friend dies. The sadness is compounded when this is a younger friend, and made tragic when there is a young family, and when the death is sudden and unexpected.

I was in the Church of Saint John the Baptist on Seafield Road, Clontarf, this morning [Thursday 2 August 2012] for the funeral of the Rector of Clontarf, the Revd Derek Sargent.

Derek was only 46. And, although he was 14 years younger than me, he was ordained just a year before I was, and it had been a pleasure for me to preach for him in Clontarf and occasionally to stand in for him on Sunday mornings when he was on holiday.

Derek died last week and is survived by his wife Breda, their daughter Rebekah, their twin sons Luke and David, and his mother Margaret. His family also includes his mother-in-law Rita, his sisters-in-law, his brothers-in-law, his uncles and other relatives.

His coffin was carried into Saint John’s this morning by six of his priest colleagues. The Revd Andrew McCroskery, Vicar of Saint Bartholomew’s Church, Ballsbridge, presided at the Funeral Eucharist, and the Revd Daniel Nuzum from Cork preached the sermon. The altar party included the Archbishop of Dublin, Dr Michael Jackson, the Dean of Christ Church Cathedral, the Very Revd Dermot Dunne, and the Archdeacon of Dublin, the Ven David Pierpoint.

Derek died last Saturday [28 July 2012] – as Daniel pointed out in his sermon, almost nine years to the day since his institution as the Rector of Clontarf on the Feast of Saint James, 25 July 2003.

Derek Sargent was born in Dublin in 1966, and grew up in Dundrum. He went to school at Taney National School and Sandford Park. He studied theology at the Church of Ireland Theological College, Saint John’s College, Nottingham, Trinity College Dublin, and the Open University.

He was ordained deacon for the Waterford Group of Parishes in June 1999. After 2½ years as curate in the cathedral group, he was instituted as Vicar, with responsibility for the three parishes of Dunmore East, Annestown and Tramore. After a year and a half as vicar he became the Rector of Clontarf in 2003.

The window in the North Transept of the Church of Saint John the Baptist is filled with stained glass of the story of the raising of Lazarus from the dead.

May Derek rest in peace, and rise in glory. 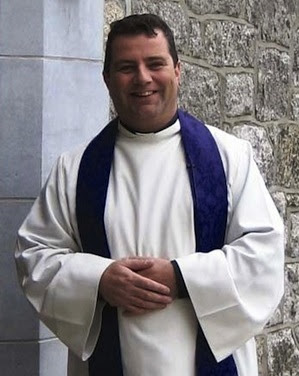 Posted by Patrick Comerford at 22:32 No comments: