Who is looking after the North Pole
when Santa is away on Christmas Eve? 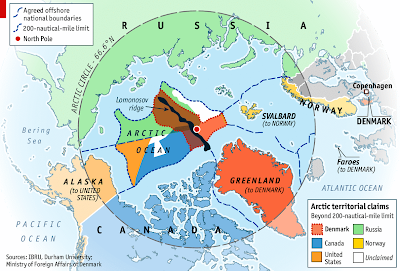 Who owns the North Pole? A map in the current edition of ‘The Economist’

All the news reports say Santa Claus is about to leave the North Pole and to start on his rounds, working from east to west through the time zones to deliver his presents around the world as Christmas Eve turns to Christmas Day.

It is such an unsettling and disturbing question that the current edition of The Economist has devoted over half a page in an effort to answer who owns the North Pole.

In its Christmas double edition, The Economist recalls how Artur Chilingarov, a Soviet polar explorer claimed in 2007, after planting a titanium Russian tricolour on the sea bed 4 km beneath the North Pole, declared: “The Arctic has always been Russian.”

However, a Cold War scramble for the North Pole never heated up, and the Arctic Council moved in to settle a border dispute between Norway and Russia.

Now, however, Denmark is staking a claim to the North Pole, too. Less than 10 days ago, according to The Economist, Denmark claimed on 15 December that, under the UN Convention on the Law of the Sea, 900,000 sq km of the Arctic Ocean north of Greenland belongs to it.

Denmark argues that the Lomonosov ridge, which bisects the Arctic, starts in Greenland. Greenland is still a self-governing part of Denmark, but Denmark’s claims are in conflict with those of Russia and Canada, and perhaps also Norway and the US. The prize for these countries is not Santa’s Grotto or some igloos, but the mineral wealth of the Arctic, which may become more accessible with global warming.

Santa better get back quickly to plant his flag and stake his claim to the North Pole.

Meanwhile, the current Christmas double issue of The Economist discusses some other seasonal topics. Who were the Three Wise Men? What threats are facing the smaller religious groups in the Middle East? And what do they call turkeys in Turkey? 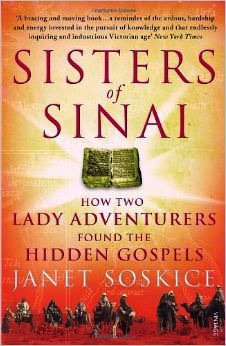 Professor Francis Crawford Burkitt of Cambridge, who translated this morning's hymn, played a key role in the adventures of Agnes and Margaret Smith in Mount Sinai

As part of my spiritual reflections for Advent this year, I have been looking at an appropriate hymn for Advent each morning. This morning [23 December 2014], as we come close to the end of Advent, I have chosen the Advent hymn “Wake, O wake! With tidings thrilling” by Philipp Nicolai (1556-1608).

This hymn, written Philipp Nicolai in 1597, is included as an Advent hymn in both the Irish Church Hymnal (142) and the New English Hymnal (No 16). We sang it as the Offertory hymn when I presided at the Cathedral Eucharist in Christ Church Cathedral, Dublin, the Sunday before last, the Third Sunday of Advent [14 December 2014].

This hymn was written by Nicolai as an appendix (Wachet auf, ruft uns die Stimme) to a book of reflections in which he considered the death of 1,300 of his parishioners, at the rate of 30 a day, during am epidemic that swept through the district of Unna in Westphalia, during a six-month period between July 1597 and January 1598.

The hymn is also a tribute to his close friend and former pupil, Wilhelm Ernst Graf zu Walbeck, who died in 1598.

The hymn is based on the parable of the Wise and Foolish Virgins (Matthew 25: 1-13), which is one of the traditional Gospel readings during this season of Advent, and the vision of a new Jerusalem found in the Book of Revelations (see Revelation 19: 7, 9 and 21: 21).

The time of fear and waiting passes and the promise of hope is fulfilled with the arrival of the Lord. The new Jerusalem, the heavenly city, is better than anywhere or any place we find ourselves today.

This hymn was translated into English by many writers, including Canon A. Cooke and Catherine Winkworth. But the version in the Irish Church Hymnal was translated in 1906 by Francis Crawford Burkitt (1864-1935), a year after he became Norris Professor of Divinity in the University of Cambridge.

Burkitt accompanied Robert Bensly, James Rendel Harris, and the sisters Agnes and Margaret Smith on the 1893 expedition to Saint Catherine’s Monastery on Mount Sinai to examine a Syriac palimpsest of the Gospels discovered there the previous year by the two sisters. Burkitt played a key role in deciphering the texts, and in subsequent publication of the team’s findings.

That story has been told delightfully by Professor Janet Soskice in her Sisters of Sinai: How Two Lady Adventurers Found the Hidden Gospels (London: Vintage, 2010).

The tune Wachet auf, which has been described as the “King of Chorales,” was written by Philipp Nicolai and was harmonised by Johann Sebastian Bach (1685-1750) in his Cantata No 140. The tune was also used by Mendelssohn as the overture to his oratorio Saint Paul.

Wake, o wake! with tidings thrilling
the watchmen all the air are filling,
arise, Jerusalem, arise!
Midnight strikes! no more delaying,
“The hour has come!” we hear them saying.
Where are ye all, ye virgins wise?
The Bridegroom comes in sight,
raise high your torches bright!
Alleluia! The wedding song
swells long and strong:
go forth and join the festal throng.

Zion hears the watchmen shouting,
her heart leaps with joy undoubting,
she stands and waits with eager eyes;
adorned with truth and grace unending!
Her light burns clear, her star doth rise.
Now come, thou precious Crown,
Lord Jesus, God’s own Son!
Hosanna! Let us prepare
to follow there,
where in thy supper we may share.

Every soul in thee rejoices;
from men and angelic voices
be glory given to thee alone!
Thy presence never more shall leave us,
we stand with angels round thy throne.
Earth cannot give below
the bliss thou dost bestow.
Alleluia! Grant us to raise
to length of days,
the triumph-chorus of thy praise.

Tomorrow: ‘Once in royal David’s city’