A cruise in the late autumn evening
sunshine around Dalkey Island 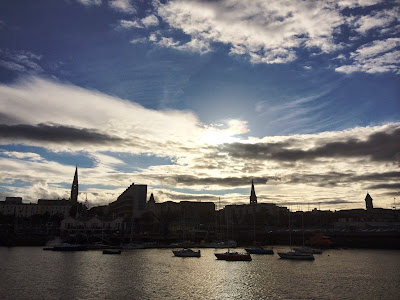 Sailing out of Dun Laoghaire Harbour on the St Bridget on Saturday evening (Photograph: Patrick Comerford, 2014)

The sunny summer-like weather that has taken everyone by surprise at the end of September continued throughout the weekend. On Saturday evening, two of us boarded the St Bridget, a 26 metre steel hull vessel owned by Dublin Bay Cruises for a 70-minutes cruise from Dun Laoghaire to Dalkey.

Initially, we had planned a cruise with Dublin Bay Cruises early last month from Howth to Dublin city centre, but ended up visiting Ireland’s Eye instead.

Dublin Bay Cruises is a family-owned business. Eugene Garrihy, his wife Clare and their three daughters run cruises between Dun Laoghaire, Dublin Port and Howth Harbour. Although the St Bridget can take 120 passengers, there was perhaps no more than two dozen people on board as we sailed from the East Pier in Dun Laoghaire on a clear, bright, sunny evening, with Howth Head to the north.

From 1821 to 1921, this was known as Kingstown. It is said the harbour is the largest “man-made” harbour in Western Europe, and for over a century it was the starting point for the main sea route from Ireland to Britain. 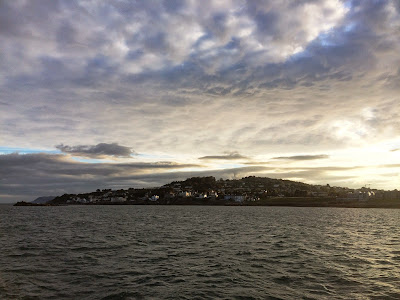 The coast line south of Dun Laoghaire is like the shoreline on an Italian lakeside in the autumn sunshine (Photograph: Patrick Comerford, 2014)

We left shortly after 5.30 and headed south past the James Joyce Martello Tower at Sandycove, the Forty Foot swimming area, Bullock Harbour, Dalkey Island and Collimore Harbour, Sorrento Point and Killiney Bay, before turning back around Dalkey Island to return to Dun Laoghaire.

Coliemore Harbour served as a port for Dublin between the 14th to 17th centuries, when the River Liffey had silted up. Today it is often used for short hops to Dalkey Island.

The first islands we came to are three small islands to the north of Dalkey Island, known as Lamb Island, Clare Island and Maiden Rock. 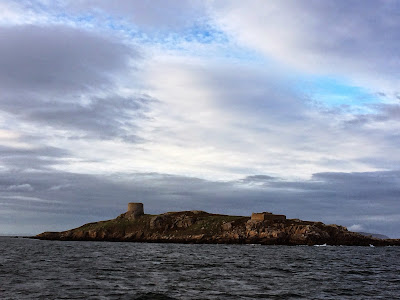 Dalkey Island was first inhabited over 6,000 years ago … but it has no residents today (Photograph: Patrick Comerford, 2014)

Dalkey Island is just 300 metres offshore and has an area of 9 hectares (22 acres), 450 metres long and 250 metres wide. Its name comes from the Irish deilg (“thorn”) and the Old Norse øy (“island” – as in Ireland’s Eye). The island has no residents, but we could see the remains of a church, houses, fortifications and a Martello Tower.

Archaeological evidence shows that the first residents lived on Dalkey Island in the Mesolithic or Middle Stone Age, and that it was inhabited in the 4th millennium BC or 6,000 years ago. There are remains of an Iron Age fort at the north of the island, but only the ditch is noticeable today.

People continued to live on the island through the Iron Age to the Early Christian period, and there are suggestions that the island was a trading centre during Roman and Viking times.

The ruined stone church, named after Saint Begnet, was built in the ninth or tenth century, but there may have been older wooden church on the site. The church was probably abandoned when the Vikings used the island as a base to form part of the busiest port in Ireland at the time.

In 1804, the Admiralty built a Martello Tower and a gun battery on the island as part of an early warning system in the face of a threatened Napoleonic invasion. It is one of eight Martello Towers dotted along the Dun Laoghaire coastline.

The builders of the Martello Tower used the church ruins as living quarters, and altered the east side of the church, adding windows and a fireplace. 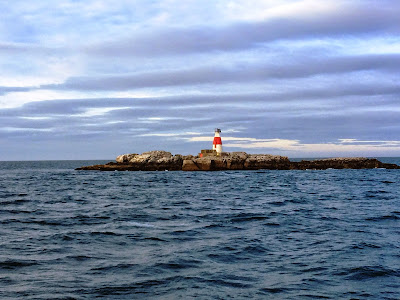 The Muglins are attractive to scuba divers but a danger to shipping (Photograph: Patrick Comerford, 2014)

Bray Head was to our south as we turned to sailed around to the east side of Dalkey Island, and then heading north between the island to our west and to our east the rocks known as “The Muglins.” They are a danger to shipping and have been fitted with a distinctive beacon.

The sun was setting as we rounded the small islets to the north of Dalkey and sailed back into Dun Laoghaire Harbour at about 6.45. 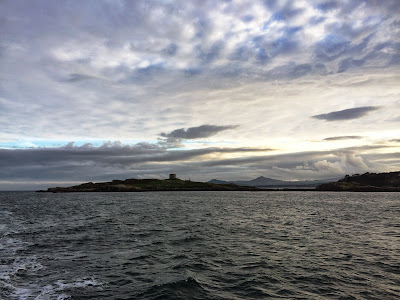