The Pelican illustrating the Lent Term 2012 Card for Sidney Sussex College, Cambridge. A pelican, symbolsing Christ in his passion, is on the wooden carving of Saint Francis that stands to the right of the High Altar in the chapel

I have been invited to preach in the Chapel of Sidney Sussex College next Sunday [5 February 2012] as one of the Guest Preachers in Lent Term. Over the past four years, I have stayed regularly at Sidney Sussex as a student at the summer school organised by the Institute for Orthodox Christian Studies. So it is good to return to Sidney Sussex at the height of the academic year, in the middle of Lent Term.

This is my second time to preach in a Cambridge college – three years ago, in 2009, the Revd Christopher Woods invited me to preach at the celebration of Candlemas in Christ’s College, where he was then the chaplain

The invitation to preach next Sunday comes from the Pastoral Dean of Sidney Sussex, the Revd Dr Peter Waddell, who is originally from Co Down. Peter has been the chaplain of Sidney Sussex since 2005, the Pastoral Dean since 2010, and also the Director of Studies in Theology. His theological interests include ecclesiology and sacramental theology, with a particular focus on the theology and practice of baptism. 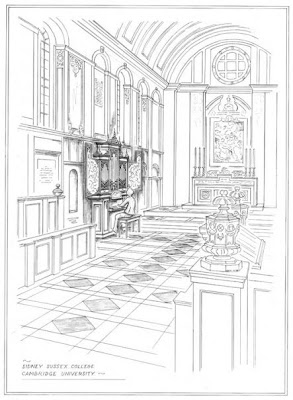 The Chapel in Sidney Sussex stands at the heart of the college as a centre of worship, prayer and inquiry

The Chapel in Sidney Sussex stands at the heart of the college as a centre of worship, prayer and inquiry for the whole Sidney community. The chapel is open all day and is available for private prayer, meditation and quiet reﬂection. Chapel services are open to everyone, and all are encouraged to use the chapel freely in their search for God. The Lady Chapel, to the right of the high altar, is especially conducive to private prayer. There the Sacrament is reserved and candles may be lit in private prayer.

The first Evensong of Lent Term was on Friday, 20 January, at 6.45 p.m., with music by Byrd, Gibbons and Weelkes, followed by Formal Hall. The Choir of Sidney Sussex is about to a release a new CD with Obsidian Records, with anthems and instrumental music by Thomas Weelkes, featuring, among others, Eleanor Cramer, Catherine Shaw and Rosie Dilnot.

On Sunday last [29 January], the Feast of Candlemas was marked in the chapel with a Festal Eucharist. But Choral Evensong is the normal service at 6.15 on Sunday evenings during term, with the College Eucharist at 10.30 on Sunday mornings. This is an informal celebration of the Eucharist, with hymns and a brief homily, and followed a brunch afterwards in Peter’s rooms.

Choral Evensong in Sidney Sussex on Sunday evenings is a traditional service from The Book of Common Prayer, with wonderful singing from the college choir. The music for Choral Evensong next Sunday, the Fifth Sunday in Ordinary Time, is: Introit: Faire is the heaven (Harris); Preces and Responses: Clucas; Psalm 28; Canticles: Evening Service in A ﬂat (Rubbra); Anthem: Behold the tabernacle of God (Harris); Brahms, Herzlich tut mich verlangen, Op. 122/9.

Choral Evensong in Sidney Sussex is normally followed by drinks in the Audit Room. Later, there is usually an opportunity after dinner for extended informal conversation with the preacher over drinks in the Pastoral Dean’s rooms, starting around 9 p.m.

The four other guest preachers at Evensong this term are:

22 January: Dr Rachel Muers, who is Senior Lecturer in Christian Studies in the University of Leeds and a leading Quaker theologian.

19 February: the Revd Canon Brian Mountford, who is Vicar of the University Church, Oxford. He was Chaplain of Sidney Sussex from 1973 to 1978.

26 February: Gloria Naylor, who is training for the ordained ministry at Westcott House in Cambridge, and is on placement in Sidney Chapel.

4 March: Professor Christopher Page, who is Professor of Mediaeval Music and Literature in the University of Cambridge, and a Fellow of Sidney Sussex College.