Hanging an old portrait over my desk 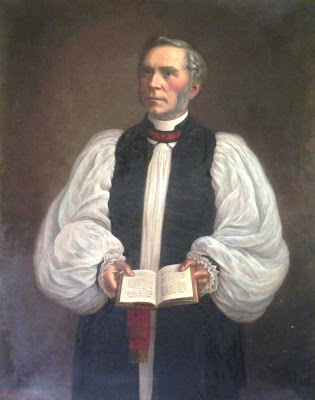 Bishop William Pakenham Walsh ... all dressed up and ready for action in mission (Photograsph: Patrick Comerford, 2010)

For four years, while I was working for the Church Mission Society Ireland (CMS Ireland), a large, three-quarter length life-size portrait of Bishop William Pakenham Walsh hung in my office in Overseas House, Rathmines. Now the portrait is hanging once again, but this time in the Church of Ireland Theological Institute.

In the last few months, CMS Ireland has sold Overseas House and is renting an office around the corner in Church of Ireland House, Rathmines. In the process of moving out, CMS has kindly agreed to this portrait being moved to my present office. A similar portrait hangs in the dining room in the Bishop’s House in Kilkenny.

In 1975, CMS moved to Overseas House. Overseas House was opened on 22 February 1975 by Archbishop George Otto Simms of Armagh as Patron of what was then called the Hibernian Church Missionary Society.

The portrait of Bishop Pakenham Walsh by Harry B. Douglas was one of the mementoes brought from Molesworth Street to Overseas House in the 1970s.

When I first moved into my office in Overseas House in 2002, my two sons were overwhelmed and overawed by the formal portrait of the bishop in his convocation robes, including a white rochet, scarlet chimere, black scarf and academic hood. They wanted to know who the bishop was. When I explained that he had been one of my predecessors at CMS Ireland, they joked about me having to turn up at work dressed like this each day. 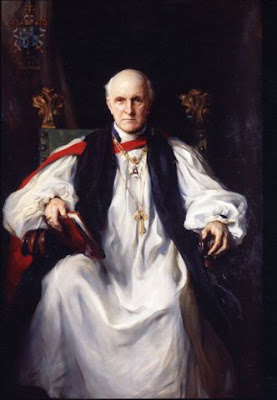 Archbishop Cosmo Lang in rochet and chimere ... he feared the portrait made him “look proud, pompous and prelatical”

Their witty comments reminded me of the story of Archbishop Cosmo Lang who, on seeing his portrait, remarked: “It makes me look proud, pompous and prelatical.” To this, a wit responded: “To which of those epithets does your Grace take exception?”

The rochet that is still worn by many bishops on formal occasions is sometimes referred to as “Lawn Sleeves”. With the topcoat of a chimere, that is how many Anglican bishops still dress for their Episcopal consecration, at formal services, and as they pose for formal photographs at General Synods or at the Lambeth Conference. 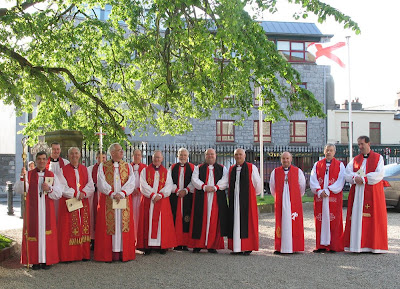 Not a black chimere in sight ... the bishops of the Church of Ireland in rochets and scarlet chimeres at the General Synod in Galway two years ago

But the chimere, like so much of clerical dress, is an academic robe. It ought to be black. The scarlet version comes from the robes of a Doctor of Divinity at the University of Oxford. At one time, almost all Anglican archbishops were graduates of Oxford and often they were in the habit of awarding degrees to newly-consecrated bishops and dressing them as though they too were holders of an Oxford DD. Similarly, bishops of the Church of Ireland often received DD from Dublin University soon after their consecration.

The custom of giving degrees out with the office has ceased, and so most Anglican bishops ought, by rights, to dress in black and white, unless they want to dress in the customary and appropriate sacramental robes.

Bishop Pakenham Walsh received the degrees BD and DD from Trinity College Dublin in 1873 when he was made Dean of Cashel.

But those who think a cope, chasuble or mitre is outdated or no longer appropriate should remember it is a long time since an Irish bishop ever sat in convocation or was ever conferred with an honorary DD from Oxford, Cambridge or Dublin.
Posted by Patrick Comerford at 17:09 5 comments: