This morning’s edition of The Irish Times [7 August 2014] carries the following five-column news report and photograph on page 7: 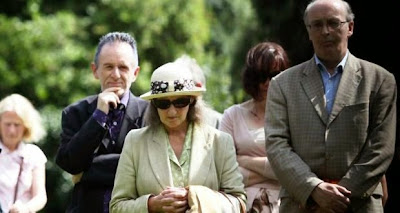 People gather for a commemoration service at the Hiroshima memorial cherry tree in Merrion Square, Dublin, yesterday, the 69th anniversary of the bombing. Photograph: Sam Boal/Photocall

The 69th anniversary of the atomic bombing of Hiroshima was marked at a wreath-laying in Dublin yesterday.

It was the first use of a nuclear weapon in warfare.

Yesterday’s commemoration in Merrion Square was organised by the Irish Campaign for Nuclear Disarmament (CND) and the Irish Peace and Neutrality Alliance.

Deputy Lord Mayor of Dublin Larry O’Toole (Sinn Féin) laid a wreath next to a memorial cherry tree planted by Irish CND in 1980. There was a minute’s silence followed by music played by traditional Irish and Japanese musicians.

Naoki Yoshimura, first secretary at the Japanese embassy in Dublin, said that although Ireland was geographically far from Japan, he was impressed that so many people came to commemorate the victims of Hiroshima. He said similar ceremonies were being held all over Japan.

Poet Hugh McFadden read an anti-war poem about the bombing. Speaking before the ceremony, he described all wars as “tragic failures of politics and diplomacy”.

Speakers at the ceremony drew parallels between the bombing of the Japanese city and the current conflict in Gaza.

80,000
Number of people killed
within minutes of the
Hiroshima bombing in 1945


Irish CND president Rev Patrick Comerford said the threat of nuclear warfare hung over all conflicts, including Gaza, and Israel had a “stockpile” of nuclear weapons.

He said he was heartbroken by images of grieving parents on the news and believed the Israeli embassy in Dublin had been “immorally silent about the murder of children at play ... to murder a child is evil. Full stop.”

He asked: “Is this the world that the victims of the Holocaust would like to see being built in their name?”

Mr O’Toole said that what happened in Japan 69 years ago was happening again in Gaza. “Defenceless, innocent people are dying,” he said, adding that he had been “overwhelmed” by the number of people in his constituency expressing concern over the situation in Gaza. He was “ashamed” of the Government’s inaction, he added.

“We can’t let this day pass without calling for the Israeli onslaught to be ended permanently,” he said.