Strolling on the Mall and
browsing the book stall 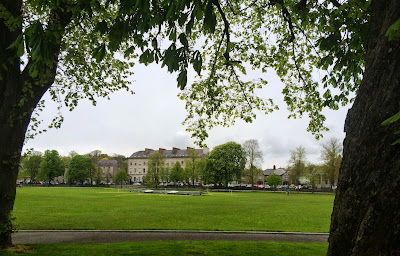 Strolling on the Mall in Armagh after lunch this afternoon (Photograph: Patrick Comerford, 2015)

After lunch at the General Synod today [8 May 2015], I needed some fresh air, and decided to go for a walk. But as I made my way out of the conference centre at the Armagh City Hotel, a found myself in the fog of smokers.

But Armagh is a pretty and attractive cathedral city, and I moved on quickly, and during my short stroll enjoyed the fresh blossoms on the trees in the hotel grounds and then the majesty of The Mall in the centre of Armagh.

From 1731-1773, the Commons in Armagh was a horse-racing course and the venue for monthly. But when Archbishop Robinson arrived in Armagh in 1765, he had a vision of developing Armagh as a new city that would rival Dublin.

He gave the new Mall as a gift to the citizens of Armagh as a public walkway, and over the years the tree-lined promenade became an open area for sports, including cricket, football and rugby.

The Mall Trustees retained responsibility for the care and upkeep of the Mall until 2003, when a partnership was formed with Armagh City and District Council. The Heritage Lottery Fund granted an award for refurbishment with the aim of updating the facilities of the Mall without losing its unique character. In 2005 the Mall won the Civic Trust Award and the Irish Architecture Award.

The Mall remains the grounds of Armagh Cricket Club, and it was easy in my mind’s eye as I strolled along the Mall this afternoon to imagine the joys of a summer afternoon watching cricket here in warm sunshine or under the shade of the trees. 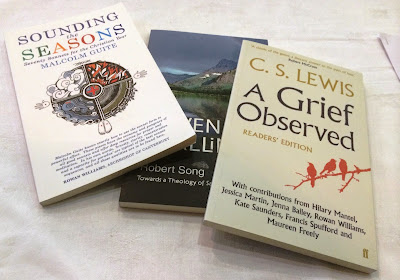 Another pleasure at General Synod is browsing through the bookstalls, and I ended up buying three books today at the stall run of The Book Well.

A Grief Observed, Readers’ Edition is an expanded edition of the classic book on grief by CS Lewis that I referred to during my lecture on TS Eliot and his Irish connections in Achill last Saturday [2 May 2015].

CS Lewis was already well-known as the author of The Chronicles of Narnia when he married Joy Davidman, an American poet with two small children, in April 1956. After four intensely happy years, Joy died of cancer and Lewis found himself alone again, and inconsolable.

In response, he wrote this journal, freely confessing his pain, rage, and struggle to sustain his faith. In it he finds the way back to life. He submitted it to Faber and Faber on 27 September 1960 using a pseudonym. But Eliot recognised his writing style and published it immediately under the name of NW Clerk.

After CS Lewis died, Faber and Faber decided to reissue A Grief Observed in January 1960. Only then was the true identity of the author made known.

The book has become a modern classic, and has offered solace and insight to countless readers since it was first published.

David’s … dating from 1896 and hidden away in a side alley beside Saint Edward’s in Cambridge (Photograph: Patrick Comerford, 2014)

The Revd Dr Malcolm Guite is a Cambridge poet, priest and singer-songwriter. He is the Chaplain of Girton College, Cambridge, and Associate Chaplain of the Church Saint Edward King and Martyr, Cambridge.

“Saint Ed’s” is in the centre of Cambridge, beside David’s bookshop in Saint Edward’s Passage, one of the best antiquarian bookshops in the Cambridge, David’s is tucked into a corner in this tiny alleyway, facing the north-west corner of the church of Saint Edward, King and Martyr. This is a bookshop to browse in, but not to while away an hour or two. This is a bookshop to while away a full morning, a full afternoon or even a full day.

Malcolm Guite’s research and writing interests include the interface between theology and the arts, especifically Theology and Literature, and he had special interests in Coleridge and CS Lewis.

In Sounding the Seasons, this priest-poet transforms 70 lectionary readings into lucid, inspiring sonnets which he offers for use in regular worship, seasonal services, meditative reading or on retreat.

Each of these 70 sonnets shows his great gifts as a poet, using clear, fresh language and vivid images that carry many levels of meaning. They were first published on his blog, and they have been revised and rearranged here to create a powerful sequence.

In his introductory essay, Guite discusses the literary forerunners of the sonnet sequence, including George Herbert, John Donne and John Keble, and he discusses his aims in writing poetry. His appendices include an index of Scriptural references and index of Liturgical seasons.

These poems illuminate the ground where human existence encounters Divine Love. The heart of the book is the ‘Stations of the Cross’ sequence, which could be used in churches on Good Friday.

The third book I bought today is Covenant and Calling, Towards a Theology of Same-sex Relationships, by Robert Song, Professor of Theological Ethics at Durham University, which was published by SCM Press last September.

This is a timely and important book in light of some of the conversations that have been going on the side-lines of General Synod and in the corridors, and in the run-up to the referendum on same-sex marriage in the Republic of Ireland later this month.

Robert Song puts forward a staunchly theological account of marriage and sexuality in which he appeals to the central biblical theme of the eschatological fulfilment of creation in Christ, but he is also open to the possibility of same-sex relationships.

In this book, he provides a fresh interpretation of traditional Christian thinking and defends a vision of the Church that embraces a plurality of callings, to marriage, celibacy, and covenant partnership.

In a cover note, Stanley Hauerwas of Duke University says: “Robert Song knows he has written a book that will make no one or any side of the debates about gay marriage happy.”

John Barclay, Lightfoot Professor of Divinity at Durham University, says: “This is provocative, beautifully argued, and a must-read for all seeking a way out of our present theological quagmire.” 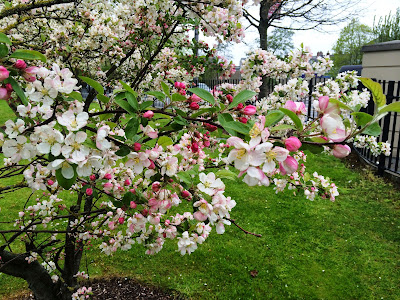 Fresh signs of life and growth in the grounds of the Armagh City Hotel this afternoon (Photograph: Patrick Comerford, 2015) 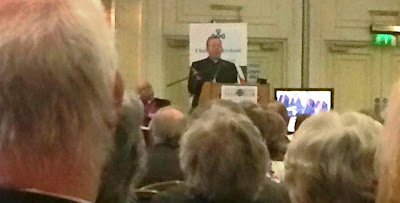 One of my joyful tasks at the General Synod this year again is act as host to our ecumenical guests. This year they include observers from the Roman Catholic, Romanian Orthodox, Methodist, Moravian and Presbyterian Churches, the Irish Council of Churches, the Religious Society of Friends and the Redeemed Church of Christ.

We are getting to know each other or renewing friendships at coffee breaks and at lunch and dinner in the Armagh City Hotel.

This morning, there was a warm welcome at the General Synod for the Roman Catholic Archbishop of Armagh, the Most Revd Eamon Martin.

Archbishop Martin said that when he was being ordained Archbishop he chose as his motto: “Sing to the Lord a New Song.”

“Ever since that, I’ve been troubled by my own motto and I’m not sure what it means to me,” he said.

Archbishop Martin said that the real inspiration was a call to conversion for each one of us every single day. He wondered if it meant new words or a new melody. Then along came Pope Francis and he put down a challenge to people to try doing things in a new key – so it’s the same words and melody in a new key. And Pope Francis says this is a missionary key.

“We are challenged to get out there with the message of the Gospel to get out to the messiness of people’s lives, to the reality of where they are living. We’re in the present and we’re called to sing a new song. I know that’s not always easy. In wishing you well for your deliberations for these days I encourage you to consider how you sing a new song to the Lord, delivering the challenging message of the Gospel without alienating people but calling them to Come and See,” he said.

Not that my voice is in good singing form this morning. I am staying in the Charlemont Arms Hotel, and stayed up late last night renewing friendships with other members of the General Synod. It was, you might say, “networking.”

And then, instead of going to sleep, I left the television on all night, half-sleeping and half watching the election news on BBC.

Earlier yesterday, I had spent part of the afternoon as the pool of people who are writing news reports on the General Synod for the Church of Ireland Gazette.

It’s hard to stop being a news junky after working as journalist for most of your adult life … and I’m still waiting for news from some of the election counts.

Posted by Patrick Comerford at 11:03 No comments: