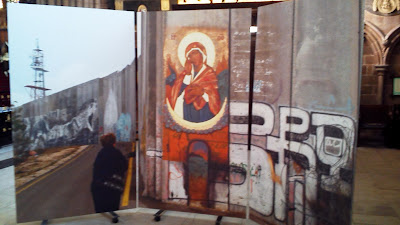 ‘Our Lady who Brings Down Walls’ ... the concluding display at the Elias Icon Exhibition in Lichfield Cathedral this month (Photograph: Patrick Comerford, 2014)

While I was visiting Lichfield Cathedral yesterday [27 February 2014], I also had the opportunity to catch the last day of the “Elias Icon Exhibition,” which included icons and works by the well-known icon-writer Ian Knowles, Director of the Bethlehem Icon Centre on the West Bank.

Ian Knowles has been the artist-in-residence in Lichfield Cathedral this month, and I missed his lecture a day earlier at lunchtime on Wednesday afternoon, ‘Fire from ashes: Icons and the Holy Land.’

But his working area was set up at the entrance to the Lady Chapel, where I was attending the mid-day Eucharist, and his exhibition was on display on its last day in the north and south transepts. The exhibition included two lectures and a five-day course on icon-writing.

The exhibition told the story of Ian’s own pilgrimage in life, and of his work today in Bethlehem and the West Bank. 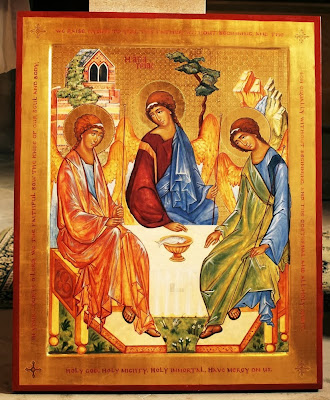 It worked through icons of Christ, the Virgin Mary, Old Testament prophets, Saint John the Baptist, and an icon inspired by Andrei Rublev’s Old Testament Trinity and now in Keble College, Oxford. 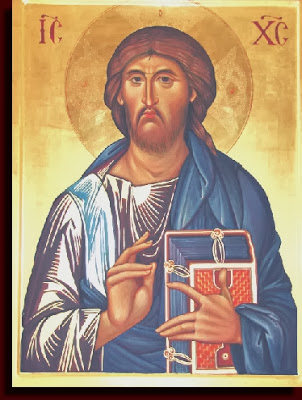 Christ Pantocrator (2007) ... this icon by Ian Knowles shows a halo is tooled with a Celtic cross derived from the Book of Kells, while the cover of the Book of the Gospels is also of Celtic origin

His icon of Christ Pantocrator (Παντοκράτωρ) shows Christ as Almighty Sustainer and Saviour of All, holding the Book of the Gospels, his hand raised in blessing. The image is inspired by the mosaic of Christ in Hagia Sophia in Constantinople and the sixth century icon of Christ in Saint Catherine’s Monastery on Mount Sinai.

The figure is of Christ is radiant with the Divine Light, bearing witness to Jesus as true God and true Man. A figure of strength and directness, Christ here is the Righteous Judge and the Lover of Humanity, who comes bearing the blessing of forgiveness and redemption for all who turn to him.

This icon was a private commission from the Ewings, a London family of Irish ancestry, so the halo is tooled with a Celtic cross derived from the Book of Kells, and the design on the cover of the Book of the Gospels is also of Celtic origin.

Modern saints and martyrs in his work on display included Blessed Charles de Foucauld, a 20th century martyr at the hands of Taureg Arabs in north Africa, but who had a love for Muslims; and Saint John Vianney, a 19th century Roman Catholic saint who is the patron saint of parish priests.

The exhibition came to an end in the south transept with a stark representation of which is perhaps his best-known work, ‘Our Lady who Brings Down Walls.’ This icon of the Virgin Mary was inspired by a speech by Pope Benedict XVI on the suffering facing the Church, particularly in the Middle East, and the original icon is painted on the West Bank wall built by the Israelis, separating Bethlehem from its natural surroundings.

This icon is of the Virgin Mother of the Church but has become popularly known as Our Lady of the Wall. It was written at the request of local Arab Christians from the Palestinian side of the Israeli separation wall and has become a focus for prayer and has been visited by many thousands of pilgrims.

In this icon, the Theotokos is shown as she is described in the Book of Revelation, clothed in the sun and pregnant, with the dragon chasing her into the desert – the great beast was already on the wall, which the pope says refers to the suffering of Christians today. It is close to the Rachel’s Tomb checkpoint beside the gates to the Emmanuel Monastery.

Ian has worked for much of his time in the Holy Land since 2008, supporting the beleaguered community there through restoring churches and doing new works, in Palestine, Israel and Jordan.

In 2010 he began to run a short course at the Emmanuel Greek Catholic monastery, and this developed into the Bethlehem Icon School, a project to promote iconography in the Holy Land, and especially to form iconographers from among the local Christian population.

In 2012, it became the Bethlehem Icon Centre, a non-profit company, linked with the Tantur Ecumenical Study Centre in Jerusalem, with the support of Bethlehem University, and with Archbishop Jules Zerey, the Melkite Patriarchal Vicar of Jerusalem, as its patron.

Ian is the Director and principle tutor, and the centre runs a three-year professional training programme in iconography with 10 students, men and women, from the Roman Catholic, Orthodox and Coptic churches.

Most of Ian’s work is commissions, with icons in churches and private homes from Colombia to London and across the Middle East. He was born in 1962, and was raised an Anglican, but he became a Roman Catholic in his late 20s. His love for icons began in his late teens as he explored the way art could relate to and express his faith.

A visit to Greece at the age of 18 opened the door of the world of icons for him. His interest grew and developed and, after stepping down from ordained ministry, he became apprenticed to Aidan Hart., the most-accomplished English-speaking iconographer, with a combination of deep Orthodox spirituality and a profound technical grasp of many aspects of painting and sculpture.

I bought some copies of Ian’s icons in the Cathedral bookshop in the Close, and Ian’s own website includes many examples of his work. 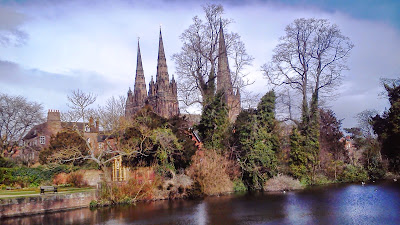 The next exhibition coming to Lichfield Cathedral is “Holy Writ: Modern Jewish, Christian and Islamic Calligraphy.” This exhibition, from 28 April to 15 June, promises works by contemporary calligraphers and lettering artists working in the traditions of the three Abrahamic faiths and using modern techniques and ideas to convey the written word.

The exhibition includes sculpture, woodcarving, digital animation and textile art, as well as two-dimensional work. Leading calligraphers are creating work specifically for the exhibition and some work will be borrowed from the British Museum. The historical context will be provided by Lichfield Cathedral’s own Saint Chad’s Gospels and by ancient Jewish and Islamic documents from the British Library.

A programme of lectures, discussions and practical workshops, with activities appropriate to all ages and levels of interest, will accompany the exhibition.