Walking through the monastery gardens to a labyrinth 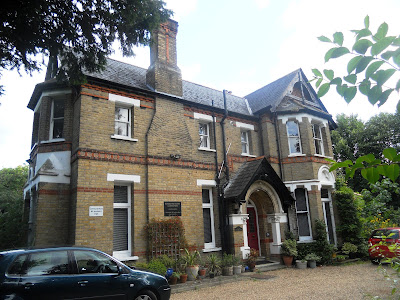 It is a short walk through the monastery gardens behind Ealing Abbey and Saint Benedict’s Church to Overton House, which houses the Benedictine Study and Arts Centre and the Institutum Liturgicum in Anglia et Cambria, or the Liturgy Institute in England and Wales, where I am taking courses in Liturgy and Liturgical Latin.

The name Castlebar features in a number of street names in this part of Ealing north of Ealing Broadway, including Castlebar Road, Castlebar Park, Castlebar and Castlebar Hill. I wondered was there was an Irish connection with Castlebar in Co Mayo.

But I found out today that Castlebar is the name of a hill nearby that is 51 metres (167 feet) high. In the 18th century, the hill was the location of Castle Beare or Castle Bear, a grand mansion or country seat on the western fringes of London.

Over the generations, the residents of Castle Bear included the publisher Archibald Constable, General Wetherall, who conquered Java during the Napoleonic Wars, and Queen Victoria’s father, the Duke of Kent. That explains why other street names here include Albert Road, Kent Gardens, Queen’s Walk, and Prince’s Gardens.

Overton House was built by John George Bartholomew (1860-1920), a grandson of the founder of John Bartholomew and Son, the famous 19th century mapmakers. Bartholomew lived in Edinburgh before moving to London. JG Bartholomew’s longest lasting legacy is in naming Antarctica – until he first used the term in 1890, the continent had been largely ignored because its lack of resources and because of its harsh climate.

Overton House was bought by Downside Abbey in 1930 and was the sold to Ealing Abbey in 1955. The house is within Ealing Borough’s “Mount Park” conservation area so that the heritage of the house and its design are respected and the garden is cared for appropriately.

The Scriptorium, where I have attended my Liturgy seminars, was once the research workplace of Dom Bernard Orchard (1910-2006), the Biblical scholar and former headmaster. This later became the London base for the liturgical research project “Appreciating the Liturgy,” founded and directed by Dom James Leachman and Dom Daniel McCarthy of Saint Benedict’s Abbey, Atchison, Kansas. Both are part of this summer school and they also write and teach work at Sant’ Anselmo in Rome.

The Gallery in Overton House is used for occasional art exhibitions organised by Dom Peter Burns.

The extensive gardens at the side and behind the house have a variety of trees, including a banana tree and an olive tree. The gardens are friendly to wildlife, and no insecticides are used on the plants and trees.

The name “JM Bartholomew” also features in some of the carved stones in the walls of the garden. Stones of a different sort have been used to shape labyrinth on the north lawn, surrounded by apple trees.

In a quiet moment between Latin seminars this afternoon, I walked around the labyrinth and found a little time for peace and for my own prayers and meditation.

In my thoughts and in the afternoon sunshine, I was a long way from Bartholomew’s Antarctica.

The daily life of prayer of a monk at Ealing Abbey 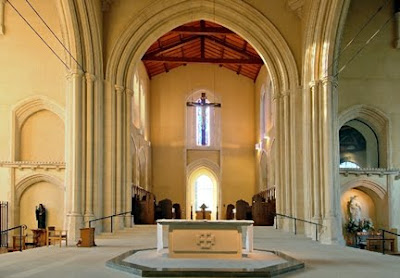 The Main Altar in the Abbey Church at Saint Benedict’s Abbey, Ealing

I awoke this morning in Ealing Abbey in time for the daily Conventual Mass and Lauds with the monks in the Abbey Church.

I am staying at Saint Benedict’s Abbey in Ealing for the next two weeks. This is a Benedictine monastic community in west London, where the community members live the monastic way of life according to the Rule of Saint Benedict, praying together in common (the Divine Office) and meditating daily.

The parish, which is served from the monastery, is one of the largest in Britain and the main work of the monks is parochial work. The Abbot of Ealing is the Right Rev Dom Martin Shipperlee, and there are more than a dozen other monks in the abbey community, although not all live here.

The parish is served by monks designated by the Abbot for this work. But there is also a parish priest, Dom Peter Burns, the prior and sub-prior are part of the parish team, and there is a also priest on the parish team who is on loan from the Diocese of Westminster.

As well as running courses on liturgy and Benedictine prayer and spirituality at the liturgy institute and the Benedictine Study and Arts Centre, the monks of Ealing also run a school, with about 600 pupils in the senior school and 230 in the junior school.

The monks of Ealing also welcome guests, sharing their life with people who wish to find a spiritual space.

Ealing became a priory in 1916, but still had its links with Downside Abbey. The first Prior, Dom Wulstan Pearson, later became the first Bishop of Lancaster in 1925.

Ealing became an independent Conventual Priory in 1947, and in 1955 Pope Pius XII gave it the status of an Abbey, with Dom Charles Pontifex as its first abbot. The abbey church was bombed in 1940, but was restored in 1962. However, it was left unfinished and was not completed until 2000.

Ealing Abbey has been the home at times for many notable monks, including the biblical scholar Dom Bernard Orchard. Dom David Knowles, the monastic historian and later Regius Professor of Modern History at the University of Cambridge, lived here from 1933 to 1939 while he was working on his magnum opus, The Monastic Order in England.

Dom Cuthbert Butler (1858-1934) also lived at Ealing following his retirement as Abbot of Downside from 1922 until he died in 1934. His books included critical editions of the Lausiac History of Palladius and The Rule of Saint Benedict, and he was the author of Western Mysticism, Life of Archbishop Ullathorne, and History of the Vatican Council.

John Main’s teaching is simple: sit still and upright for at least 20 minutes and at most 30 minutes, close your eyes and silently recite the prayer-phrase, which is a sacred word or phrase that is repeated continually. He recommended using as the prayer-phrase the word Maranatha, which in Aramaic means “Come, Lord” (see I Corinthians 16: 22; Revelation 22: 20).

His methods are now used throughout the world, and those who have acknowledged his influence include the former President, Mary McAleese, Archbishop Rowan Williams and Metropolitan Kallistos Ware.