A Wexford tribute to my great-grandfather 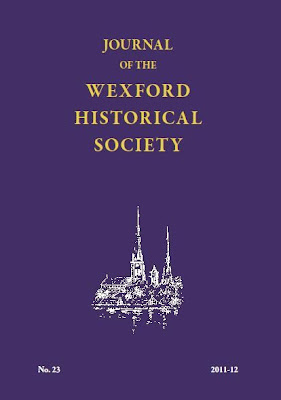 The latest edition of the Journal of the Wexford Historical Society, No 23, 2011-2012, was launched in Wexford last night

I was back in Wexford last night [16 November] for the launch of the latest edition of the Journal of the Wexford Historical Society. The latest edition is Number 23 and is edited by Celestine Rafferty. The society has published this biennial journal since 1968, and I have contributed papers to three previous editions.

My paper in the Journal is a tribute to my great-grandfather: ‘James Comerford (1817-1902): rediscovering a Wexford-born Victorian stuccodore’s art’ (pp 4-32).

James Comerford began his career working with Pierce, Pugin and McCarthy on their Wexford churches. After Pugin’s death, he moved from Wexford to Dublin, where his work included the now demolished but not-forgotten ‘Irish House’ on the corner of Wintetavern Street and Wood Quay, below Christ Church Cathedral, and the Oarsman, a public house still standing in Ringsend.

James Comerford was also a leading trade unionist in the late 19th century, and died in Beechwood Avenue in Ranelagh in 1902. My paper is illustrated with many photographs telling the life story of this Wexford artist and trade unionist, who began his life as a stuccordore and ended his career as an architect and civil servant.

Celestine has done magnificent work in editing this latest edition of the Journal, although she is self-effacing and says “I’m just the editor.” She adds: “The real kudos should go to the 13 contributors: without them there wouldn’t be a journal.” 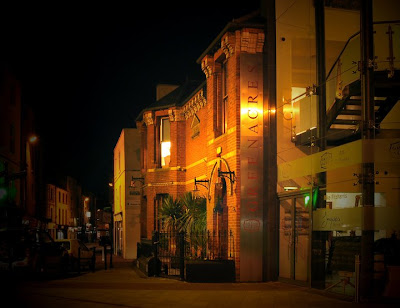 Celestine has worked with the Wexford County Library Service since 1979, and is a specialist in local studies. Last year, she co-edited with Colm Tóibín Enniscorthy: A History published by Wexford County Council Public Library Service for the “Enniscorthy1500 Celebrations.” She has edited many journals and books of local importance, including Exemplar Hiberniae, 100 years of Local Government in County Wexford.

The Journal was launched last night in Greenacres, the bistro, art gallery and wine shop in Selskar in the heart of Wexford town, by Dr Kevin Whelan, Smurfit Director of the Keough Naughton Notre Dame Centre.

Kevin Whelan is another well-known Wexford historian. He has been the Smurfit Director since 1998, and he also directs the annual Irish Seminar, bringing together leading names in Irish studies for an academic conference in Dublin each summer. He is the author of 15 books and over 100 papers on Ireland’s history, geography, and culture, including: The Tree of Liberty. Radicalism, Catholicism and the Construction of Irish Identity 1760-1830, Fellowship of Freedom: the United Irishmen and the 1798 Rebellion, and the Atlas of the Irish Rural Landscape. 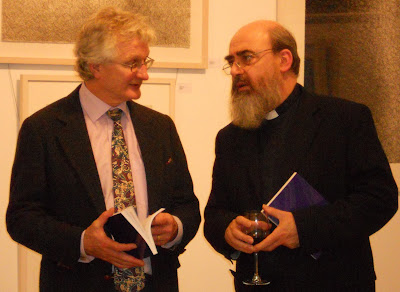 With Bernard Browne of Mill Quarter, Old Ross, at the launch of the Journal in Wexford last night (Photograph: Barbara Comerford, 2011)

The other contributors to the latest Journal are:

● Paddy Berry, who writes about emigration from Co Wexford to Argentina;
● Bernard Browne, who writes on Lorenzo Dow (1777-1834), an American Methodist preacher in Wexford;
● Monica Crofton, who recounts her experiences as a walking tour guide in Wexford;
● Nicholas Furlong, who is engaged in a robust debate about 1798 with Dr Tom Dunne;
● Liam Gaul, who has researched the life of PJ McCaul (1861-1919), the balladeer and poet who wrote Kelly the Boy from Killann, Follow Me Up to Carlow, and Boolavogue;
● David Ian Hamilton, who has given us the first instalment of two tracing the story of the Sutton family of Longraigue;
● Tom McDonald, who writes about the Whiteboys and agrarian unrest in Co Wexford;
● Niall O’Brien, who tells a tantalising story of Wexford apprentices in 16th century Bristol;
● Tom Pierse, who has written an interesting account of the life of his father, Dr Toddy Pierse (1898-1968) of Mount George;
● Eithne Scallan, who contributes a paper on Dr George Hadden (1882-1973), the Methodist missionary who returned to his native Wexford and founded the Old Wexford Society;
● Michael Sweetman, who has written the first of a two-part study of Michael Hayes, who was convicted in 1798;
● Tom Williams, who looks at the life and work of the Wexford-born folklorist James G Delaney (1916-2000). 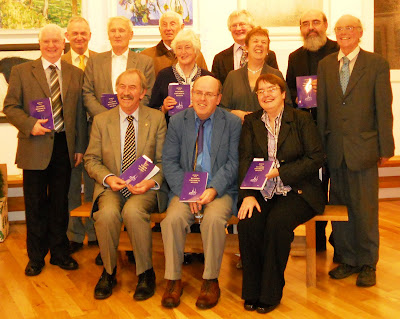 Last night’s launch was attended by many old friends and colleagues, including Joe Ryan, former Mayor of Wexford, Jarlath Glynn, President of the Wexford Historical Society, and the Revd Matt Glynn of Tagoat. It was sad that my former colleagues from my days as a journalist in Wexford, Nicky Furlong, Vice-President of the Wexford Historical Society, and Hilary Murphy, former editor of the Journal, were not there last night.

When I worked as a journalist with the Wexford People group of newspapers, I lived only a few steps from where my great-grandfather had lived and worked. We were discussing his life in Wexford and his strong trade unionism when I was told that last week, in Wexford Town Library, the Wexford Historical Society also relaunched Men of Iron by the late Michael Enright, an account of the Wexford foundry disputes of 1890 and 1911 and first published in 1987 when he was chair of the Wexford Trades Council.

This year and next mark the centenary of the Wexford lockout of 1911-1912, the first of a series of key centenaries over the next decade or so. Between August 1911 and February 1912, workers at three Wexford foundries were locked out by their employers, who refused to recognise their right to be represented by the union of their choice.

After enormous hardship and sacrifice, the lockout ended after six months when the workers returned to work led by Richard ‘Dick’ Corish, general secretary of the newly-established Irish Foundry Workers’ Union and father of the late Brendan Corish. 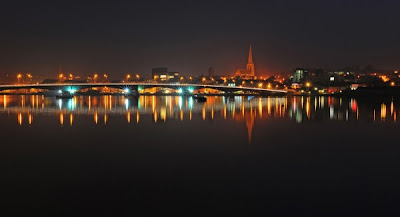 The Wexford Historical Society was founded as the Old Wexford Society in 1944 by a small group of enthusiasts to research, record and promote the history, archaeology and heritage of Wexford town and county of Wexford. The late Dr George Hadden provided the initial stimulus and he continued to inspire and lead the society for more than 30 years.

The society organises a programme of lectures during the winter months and a series of field-trips during the summer months.

My three previous papers in the Journal are:

‘Bishop Richards and Dean Croghan: the contrasting tale of two Wexford missionaries in South Africa,’ Journal of the Wexford Historical Society No 18 (2000-2001), pp 21-44.

The latest edition of the Journal of the Wexford Historical Society is available in all good bookshops in Wexford. Annual membership fees of the society are €20 for individuals and €30 for family membership.